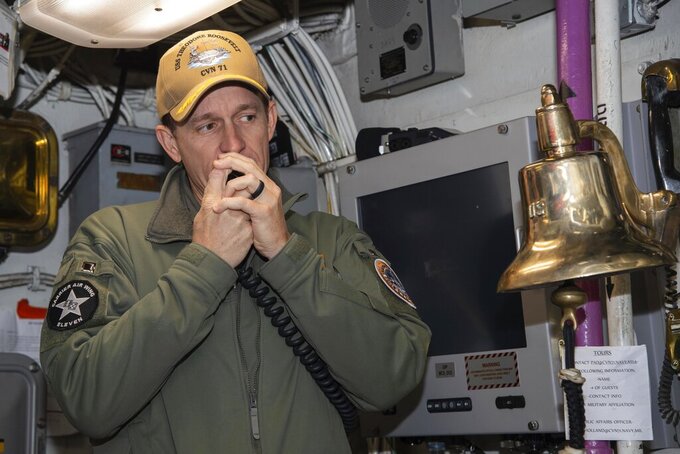 FILE - In this Jan. 17, 2020 file photo provided by the U.S. Navy, Capt. Brett Crozier, then-commanding officer of the aircraft carrier USS Theodore Roosevelt (CVN 71), addresses the crew in San Diego, Calif. The dismissed captain knew he was jeopardizing his military career when he broke protocol and sent a now-famous email warning of possible sailor deaths due to a coronavirus breakout on board, but he did so in an urgent effort to help avoid a "larger catastrophe," he wrote in a witness statement obtained by the San Francisco Chronicle. (Mass Communication Specialist Seaman Alexander Williams/U.S. Navy via AP, File)

SAN FRANCISCO (AP) — The dismissed captain of a U.S. Navy aircraft carrier knew he was jeopardizing his military career when he broke protocol and sent a now-famous email warning of possible sailor deaths due to a coronavirus breakout on board,

But Brett Crozier says in a witness statement obtained by the San Francisco Chronicle that he did so in an urgent effort to help avoid a “larger catastrophe."

Crozier's witness statement, recorded in May during the Navy's investigation into the handling of the outbreak aboard the USS Theodore Roosevelt, provides a look at his thinking when he sent the March email that upended the military world and brought condemnation from the top Navy admiral overseeing the carrier. President Donald Trump also criticized Crozier.

Vice Admiral William Merz, commander of the U.S. Seventh Fleet, told investigators that Crozier either did not understand military efforts underway to evacuate the crowded ship or wanted to undermine those efforts. Merz hypothesized that Crozier screwed up and panicked, or wanted to play hero.

“Either way, he surrendered, and brings into question his resiliency and toughness in command," Merz said.

Crozier, a native of Santa Rosa, California, was stripped of his position but received a rousing hero's sendoff from his crew, who credited him with saving their lives.

A frustrated Crozier sent the letter March 30, saying that more needed to be done to remove 5,000 sailors from the carrier docked in Guam. More than 1,200 sailors eventually tested positive for the virus, including Crozier, who spent a month in Guam in isolation. Several were hospitalized and one died from COVID-19 complications.

Crozier said he sent the email through unclassified channels because of quickly worsening conditions that demanded urgent action. Navy officers said that led to the memo being leaked and jeopardized sensitive talks with Guam officials to house sailors in hotel rooms.

They said he was removed for poor handling of the breakout and for going outside the chain of command.

“My intent in sending the email... was to bring a sense of urgency to a rapidly deteriorating and potentially deadly situation onboard the (Theodore Roosevelt) and avoid a larger catastrophe and loss of life,” Crozier said in the witness statement.

“From my perspective, even just one more week of routine planning would have resulted in another week of exponential growth in positive cases and greater risk to more Sailors. We wanted to stop the administrative bureaucracy... so I sent up a red flare," he said.

The conditions on board the Roosevelt became public when the San Francisco Chronicle reported on the email. Crozier was dismissed from command April 3.