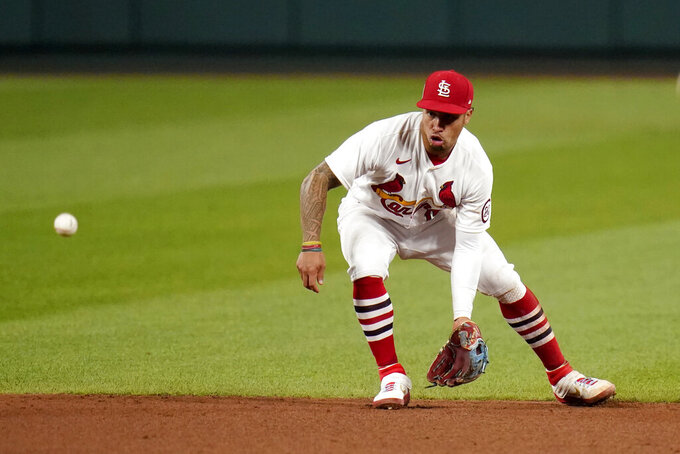 FILE - In this Sept. 11, 2020, file photo, St. Louis Cardinals second baseman Kolten Wong handles a sharp grounder by Cincinnati Reds' Nick Castellanos during the fifth inning of a baseball game in St. Louis. The Cardinals have declined Wong's $12.5 million option, making the Gold Glove second baseman a free agent. The 30-year-old Wong will receive a $1 million buyout. Wong, a first-round pick in the 2011 draft, made his big league debut in 2013 and spent his first eight seasons with St. Louis. (AP Photo/Jeff Roberson, File)

The 30-year-old Wong will receive a $1 million buyout. Wong, a first-round pick in the 2011 draft, made his big league debut in 2013 and spent his first eight seasons with St. Louis.

“STL will always have a special place in my heart and I will never forget all the amazing people who impacted me along the way! Much love,” Wong said Wednesday in an Instagram post.

Wong hit. 265 with a homer and 16 RBIs in 53 games during the pandemic-shortened season, helping the Cardinals make the playoffs for the second straight year. They were eliminated by San Diego in the NL wild card round.

Wong won his first Gold Glove last year. He is a finalist again this season, with the winner announced on Tuesday.

John Mozeliak, the president of baseball operations for the Cardinals, said he spoke with Wong on Wednesday.

“I told him that with some of the uncertainties, we're just not in a position to do that,” Mozeliak said. “We both agreed to keep the door open, and so as we progress in this, it’s something that we’re not ruling out for a future return.”

While leaving the door open for a reunion with Wong, Mozeliak also mentioned giving Tommy Edman a shot at second base.

“Not speaking in absolutes, not saying anything's for sure, but, as we approach this offseason, it's definitely going to require some creativity, some patience and good timing,” Mozeliak said.

Mozeliak also said he has been in contact with the representation for pitcher Adam Wainwright and catcher Yadier Molina, two longtime Cardinals stars who became free agents on Wednesday. He plans to talk to their agents again this week.

First baseman Paul Goldschmidt had a bone spur taken out of his right elbow, and Mozeliak said he is progressing very well.

“I saw him earlier in the week, and he feels good,” Mozeliak said.