Careless Germany lets Turkey come back for 3-3 in friendly 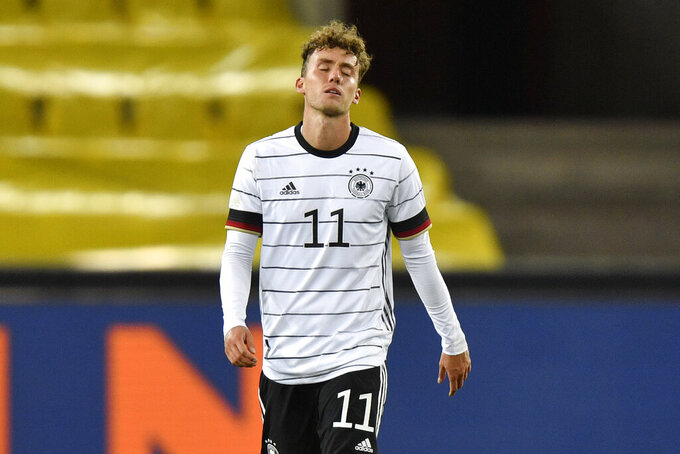 COLOGNE, Germany (AP) — Kenan Karaman scored late to give Turkey a 3-3 draw against Germany on Wednesday after the home side let the lead slip away three times in their friendly game.

Karaman – who was born in Stuttgart and plays for Fortuna Düsseldorf – scored in the fourth minute of injury time when Abdülkadir Ömür laid the ball back for him to fire through goalkeeper Bernd Leno’s legs.

Borussia Mönchengladbach midfielder Florian Neuhaus scored on his Germany debut and Benfica forward Luca Waldschmidt got his first international goal, but the home side was left ruing a lack of concentration after failing to hold on for the win.

“Again in the last minute,” Germany coach Joachim Löw said of the equalizer. “So now we’re disappointed and fed up.”

Germany conceded in the 96th minute to draw 1-1 with Spain in September and followed up by letting another lead slip in a 1-1 draw in Switzerland.

Wednesday's game was overshadowed by fresh allegations of tax evasion by the German soccer federation and by the high number of coronavirus infections in Cologne. Only 300 spectators were allowed to attend.

Prosecutors raided the federation’s offices and some members’ private homes early Wednesday, searching for evidence that it may have avoided paying about 4.7 million euros ($5.5 million) in taxes.

Löw had to make do without many of his regulars, including Ilkay Gündogan, who tested positive for the coronavirus, Leroy Sané, Suat Serdar, Timo Werner, and Barcelona goalkeeper Marc-André ter Stegen.

Julian Draxler had an early goal ruled out for offside, but otherwise the visiting players had more chances until Löw’s side gradually improved midway through the half.

Draxler – Germany’s captain on the night – finally made the breakthrough in first-half injury time, when Julian Brandt and Kai Havertz combined to set him up.

But Fenerbahçe midfielder Ozan Tufan equalized in the 50th, taking the ball from German-born teammate Kaan Ayhan and eluding Brandt before shooting inside the top corner.

Leno denied Cengiz Ünder from scoring another goal minutes later, before Neuhaus capped his debut with a goal after playing a one-two with Havertz in the 58th.

The home side complained bitterly when Efecan Karaca robbed the ball from Neuhaus and equalized in the 67th, but no foul was given. Emre Can was booked for his protests.

Waldschmidt got his first goal for Germany in the 81st, but Karaman had the final say.