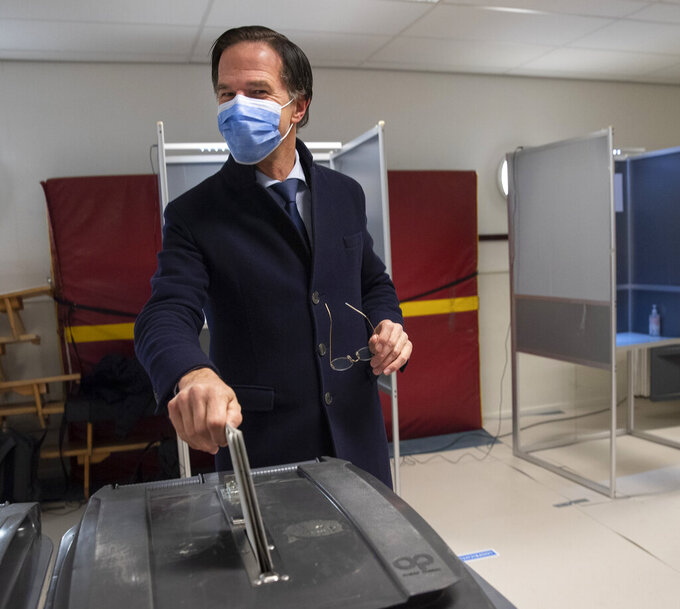 Dutch caretaker Prime Minster Mark Rutte casts his vote in a general election in The Hague, Wednesday, March 17, 2021. Polling stations have opened opened across the Netherlands from Monday in a general election that has been spread over three days to allow people to vote safely during the coronavirus pandemic. (AP Photo/Peter Dejong, Pool)

THE HAGUE, Netherlands (AP) — Dutch voters pushed Prime Minister Mark Rutte toward a fourth term in office in Wednesday’s general election that bolstered his conservative party’s position as the biggest in parliament and boosted a key ally into second place, an exit poll suggested.

With Rutte's bloc and other mainstream parties thriving, the far-right failed again to make a major breakthrough despite its hopes of appealing to populist sentiments and capitalizing on the severe economic downturn and pandemic that has killed more than 16,000 people in the Netherlands.

Rutte, 54, has now won four elections in a row. He has been in power for more than a decade at the head of three different coalitions and could become the country’s longest-serving prime minister if he manages to form a new government.

He said voters had given his party “an overwhelming vote of confidence and it is humbling It is also forcing us to do everything we can to make a success out of it.

”“The agenda ahead of us is enormous,” Rutte said in his first reaction to the poll results. “In the coming weeks and months, we have to lead the Netherlands through the corona crisis.”

The Ipsos exit poll for national broadcaster NOS, updated to include early results from vote counting, forecast that Rutte’s People’s Party for Freedom and Democracy, or VVD, would win 35 seats, up from 33 in the last election, of the 150 seats in the lower house of parliament.

“This shows that the Netherlands trusts the VVD and Mark Rutte to continue in this unprecedented crisis,” said VVD lawmaker Sophie Hermans.

The poll forecast that the centrist D66 party, which was part of Rutte's last coalition, won 26 seats — seven more than at the last election — to become the country's second largest party.

“This is silver with a golden glow,” D66 campaign leader Sjoerd Sjoerdsma told NOS. Rutte indicated it would be the obvious partner to talk to first to lay the foundation for a new coalition.

D66's leader, Sigrid Kaag, a former diplomat who served as minister for foreign trade and development cooperation in Rutte's last coalition, congratulated the VVD leader and thanked her voters.

“I have always believed and that has been confirmed this evening, that people in the Netherlands are not extreme, but moderate and appreciate a positive attitude,” she said after her party tweeted a photo of Kaag standing on a table cheering her party's big gains.

The Freedom Party of anti-immigration, anti-Islam firebrand Geert Wilders was forecast to drop two seats to 18, compared to the 2017 election result.

“I had, of course, hoped for more … but I think we are still the third party of the Netherlands,” he said, predicting that his party likely would remain the largest opposition group in parliament.

Another party on the far-right of the Dutch political spectrum, Forum for Democracy, did better, according to the poll, gaining 6 seats to reach 8. Its charismatic leader, Thierry Baudet, was one of the only leaders to hold campaign rallies around the country amid a tough lockdown.

Ipsos said before the poll that uncertainty caused by voting in the COVID-19 pandemic makes the margins of error larger than in other elections.

Counting votes at municipalities throughout the nation of more than 17 million people was continue through the night in the largest cities with the most votes.

The Dutch voted, practicing strict social distancing, at thousands of polling stations on Wednesday's final day of an election overshadowed by the coronavirus pandemic.

School gyms, churches, museums, concert halls and at least one windmill were pressed into service as voting centers by authorities looking for venues where people could vote safely amid rising infection rates. In Amsterdam, cyclists and drivers voted in a drive-thru facility at a conference center.

Rutte's popularity rose sharply last year as he steered his country through the pandemic that has killed more than 16,000 people in the Netherlands and plunged the prosperous nation into recession. But that popularity eroded in recent weeks as public support for a months-long lockdown declined and his government resigned over a scandal involving tax officials wrongly labeling thousands of families as fraudsters.

Voters also had other issues on their minds, from the climate to housing shortages, health care funding and the Netherlands' place in Europe.

A record 37 parties took part in the election and the exit poll suggested 17 could win enough of the vote to take at least one seat in parliament.