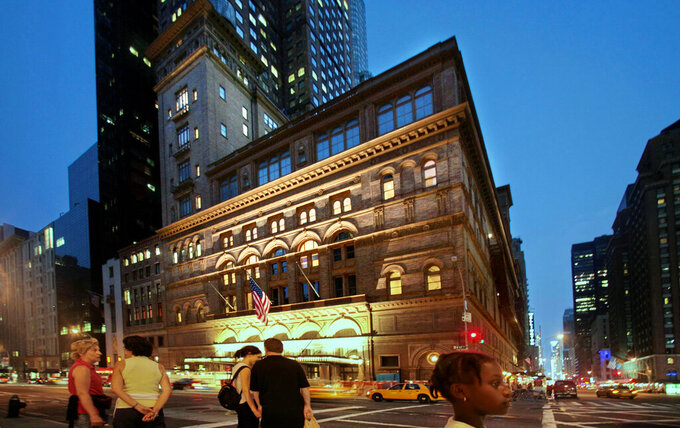 FILE - In this Aug. 3, 2007 file photo, the Carnegie Hall building at 57th St. and Broadway appears in New York. Carnegie Hall is projecting a $9 million operating deficit on its $104 million budget after canceling the rest of its season because of the coronavirus pandemic and anticipates making changes to its schedule for 2020-21. (AP Photo/Bebeto Matthews)

Carnegie Hall is projecting a $9 million operating deficit on its $104 million budget after canceling the rest of its season because of the coronavirus pandemic and anticipates making changes to its schedule for 2020-21.

“We’ve obviously sold a lot of tickets for next season, but there’ll be issues like are people from the very beginning going to all come straight back to concerts or will people be a little bit more cautious about large gatherings?” executive director Clive Gillinson said Thursday. “We have no idea what the psychology is going to be around this in every way across society as a whole.”

Gillinson said this will be the first deficit since he joined Carnegie Hall in 2005. The budget was slashed 20% in 2007-08 because of the Great Recession.

Carnegie has canceled all events in its auditoriums through July 25, roughly 30% of this season's schedule. It has just under 400 full-time employees plus part-time staff and teaching artists. It has not decided whether layoffs will be needed.

“We have made all the cuts we possibly can to this year,” Gillinson said. “If something happens this late in a year, there’s obviously much less room to move.”

The Lyric Opera of Chicago also scrapped the remainder of its season and put off scheduled programming for future years.

Carnegie has also called off summer tours for its National Youth Orchestra of the USA, NYO2 and NYO Jazz but hopes to host the musicians and have local events around residencies at suburban Purchase College.

Carnegie will be launching digital offerings featuring artists performing at home and historical concerts. It expects to re-open in mid-September ahead of opening night on Oct. 7 with the Los Angeles Philharmonic, music director Gustavo Dudamel, pianist Lang Lang and soprano Liv Redpath.

More than 170 concerts are scheduled, but Gillinson anticipates some will be dropped.

“We’ll almost certainly have to because we won’t be able to afford to do everything,” he said. “But some of those decisions may be made for us because it’s completely possible that a lot of organizations themselves will have significant challenges because of what’s happened. We may find some organizations say we just can’t afford to travel to America next season.”

The Lyric Opera postponed its production of the musical “42nd Street” from May 29-June 21 this year to the spring of 2022, a staging from Paris’ Theatre du Chatelet.