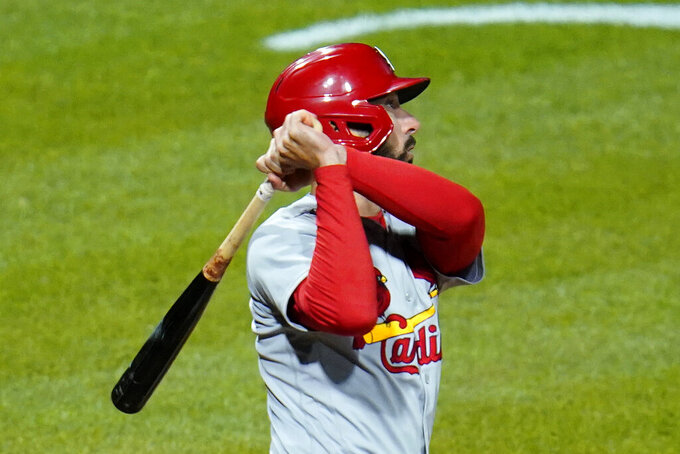 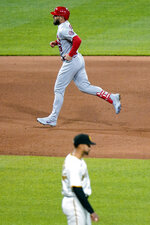 Carpenter connected off Duane Underwood Jr. in the sixth inning to put the Cardinals ahead 6-1 while batting for John Gant (2-2). Carpenter was batting .096 when he followed Tyler O’Neill’s single and Andrew Knizner’s walk with a drive to right-center for his third home run this season.

“I know this is crazy to say based off the numbers, but I don’t think it’s really representative of how I’ve been swinging the bat,” Carpenter said. “I’ve made a lot of hard outs and haven’t gotten anything going on a consistent basis as far as production. Even during times when I was making outs, I felt like I was where I needed to be. Still, you obviously want to have success.”

O’Neill had three hits, including a leadoff home run in the fourth inning. The drive cleared the bullpens in center field, to give the Cardinals a 3-0 lead.

Nolan Arenado hit run-scoring bloop doubles in the first and third innings, the first Cardinals batter with two doubles in a game since Yadier Molina against the Los Angeles Dodgers on April 9, 2019.

“We were able to scatter some runs, throwing up some ones here and there and putting them on their heels, per se,” O’Neill said.

St. Louis won for the sixth time in eight games.

Gant gave up one run, three hits and five walks in five innings, including an RBI single in the fourth by Kevin Newman, who had two of Pittsburgh’s four hits.

“Tonight, I didn’t have a whole lot working for me,” Gant said.

JT Brubaker (2-2) allowed three runs and seven hits in five innings before being lifted for a pinch hitter.

“I thought he threw the ball well,” Pittsburgh manager Derek Shelton said. “I mean, he gave up one hard-hit ball, and it was a homer.”

Pittsburgh scored twice in the sixth when Kodi Whitley relieved with the bases loaded and two outs, balked in a run and threw a run-scoring wild pitch that cut the Pirates’ deficit to 6-3.

After walking pinch-hitter Todd Frazier, Whitley escaped the jam by getting Adam Frazier to ground out.

Pittsburgh dropped to 12-13 with consecutive losses.

Cardinals center fielder Harrison Bader made his season debut after beginning the year on the injured list with a right forearm strain. He was 1 for 4 with two strikeouts.

Bader is confident the forearm issue is behind him.

“I now have a routine that I’ve been doing for the past six weeks that has allowed me to put myself in a really good physical position to go out there and compete,” he said.

Rookie Dylan Carlson, who had been filling in for Bader, will play right field.

Cardinals reliever Genesis Cabrera pitched two perfect innings. It was his first appearance since hitting the Phillies’ Bryce Harper in the face with a pitch Wednesday night.

“It’s good to see him come in and be him and pitch with aggressiveness and trust all his pitches and let it eat,” St. Louis manager Mike Shildt said.

Cabrera sent a note of apology to Harper on Thursday saying the beaning was unintentional.

Cardinals: RHP Adam Wainwright is expected to be activated from the COVID-19 IL Monday and start against the New York Mets. Wainwright has been vaccinated, but he came in close contact with a family member who has tested positive for the virus. Wainwright was scheduled to pitch Sunday against the Pirates but RHP Carlos Martinez will take his place. … RHP Daniel Ponce de Leon (right shoulder inflammation) was placed on the 10-day IL and RHP Jake Woodford was recalled from the alternate training site.

St Louis RHP Jack Flaherty (4-0, 3.18 ERA) puts his perfect record on the line Saturday night against RHP Trevor Cahill (1-2, 7.11). Flaherty has a 1.50 ERA in his last four starts. Cahill has allowed seven runs in two of his four starts this season and one run in each of the other two.