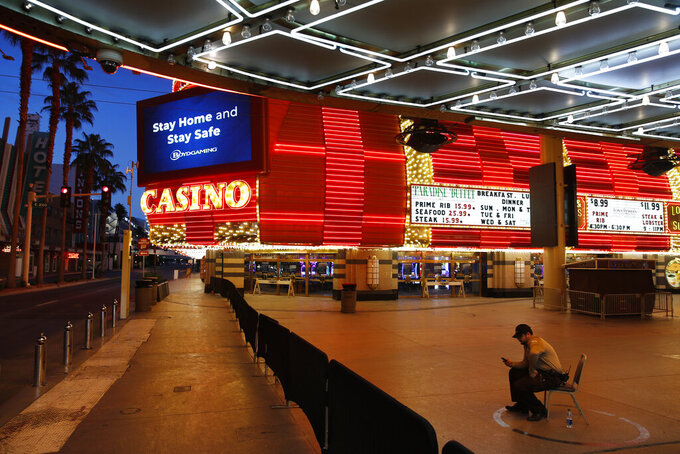 FILE - In this April 19, 2020, file photo, a lone security guard watches over casinos shuttered due to the coronavirus outbreak in Las Vegas. The casino workers' Culinary Union plans to hold a protest drive up the Las Vegas Strip, Tuesday, May 12, 2020, to call for casino companies to release their reopening plans and to adopt the union's recommended safety protocols. (AP Photo/John Locher, File)

LAS VEGAS (AP) — The casino workers' Culinary Union plans to hold a protest drive up the Las Vegas Strip Tuesday evening to call for casino companies to release their reopening plans and to adopt the union's recommended safety protocols.

The Culinary Union plans to have a caravan of workers drive from the union headquarters down the shuttered Las Vegas Strip to the famous “Welcome to Fabulous Las Vegas Sign” and back as a show of solidarity.

The union has called for casinos to publicly release the detailed plans they are submitting to gambling regulators laying out how they plan to safely reopen when Nevada allows it. Gov. Steve Sisolak shuttered the properties in mid-March to stop the spread of the coronavirus.

The governor said he's allowing the Nevada Gaming Control Board to have the final say on when casinos can reopen.

The Nevada Gaming Control Board and the Nevada Gaming Commission, which is considered the final authority on regulations and licensing, approved rules that will require casinos to limit customers, keep gamblers spaced apart and disinfect dice, cards and all other surfaces upon reopening.

The union wants more extensive proposals, including testing staff for COVID-19 and screening people, including guests, with temperature checks upon entry. And the group has called for the regulators or elected officials to release all other casino plans and to include the union's proposed rules as part of any reopening plan.

Several casino operators have released their plans already, including MGM Resorts on Tuesday morning. MGM Resorts, which lists 13 properties in Las Vegas, has said it plans to reopen its casinos in phases, with the Bellagio and New York-New York expected to be opened first.

State health officials were reporting Tuesday that 312 people have died from the COVID-19 illness in Nevada and almost 6,300 have tested positive.

For most people, the virus causes mild or moderate symptoms for up to three weeks. The vast majority recover. Some older adults and people with existing health problems can experience severe illness including pneumonia and death.

— The coronavirus outbreak has forced the cancellation of the Night in the Country music festival in rural northern Nevada in July. The annual festival scheduled July 23-25 typically draws 30,000 country music fans to the Lyon County fairgrounds north of Yerington about 60 miles (96 kilometers) southeast of Reno.

— The benefit for the Boys and Girls Club of Mason Valley is scheduled next summer July 22-24. Festival organizers say they’re trying to persuade as many of this year’s scheduled performers to return next year, including the Marshall Tucker Band, Whitey Morgan, Jon Pardi and Rodney Atkins.

— The governor's office announced Tuesday evening that even though some businesses are starting to reopen, people filing for unemployment in Nevada will still not be required to search for work in order to get benefits. Sisolak's office said the work search requirement will remain waived until further notice and people filing for benefits online can bypass the work search screen.