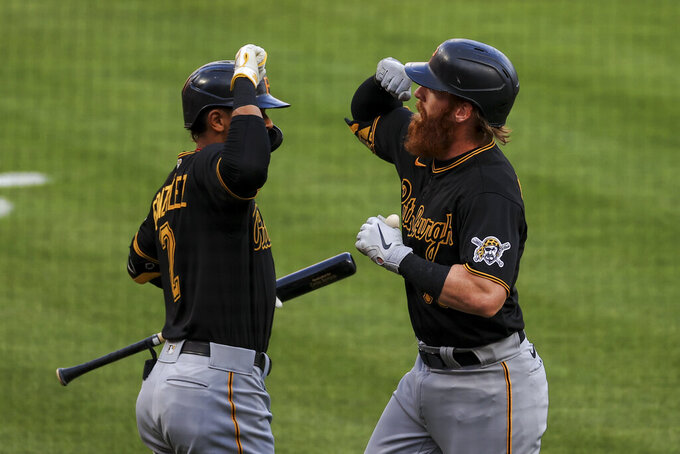 CINCINNATI (AP) — Nick Castellanos hit a go-ahead homer in the seventh inning hours after deciding to appeal a two-game suspension for his part in a brawl, and the Cincinnati Reds beat the Pittsburgh Pirates 5-3 on Monday night.

Castellanos connected off Sam Howard (0-1) for his third homer of the season. He admired the shot as he walked out of the box, whipped his bat toward the home dugout and yelled toward teammates as he shuffled toward first.

“I’m happy for players on any team to show emotion,” manager David Bell said. “It takes a lot to play this game and play it well. To be able to enjoy when you do well, it’s a good thing.”

Castellanos was disciplined by Major League Baseball on Monday afternoon for sparking an incident with the St. Louis Cardinals on Sunday — the right fielder flexed while standing over pitcher Jake Woodford moments after sliding into home. Woodford had hit Castellanos with a pitch moments before. His suspension is being held in abeyance until the appeal is heard.

Monday's shot was the 500th RBI in Castellanos' career.

“He's been carrying us,” said Reds third baseman Mike Moustakas. “Nick is having a phenomenal start to the season. His energy is electric. It's contagious. What he brings to the table is more than offense and defense. His game is rubbing off on us.”

Moustakas tied it at 2 in the fifth with his first home run of the season, a solo shot on an 0-1 pitch just inside the right-field foul pole off Luis Oviedo.

“He threw me a slow curveball 0-0 and I swung through it,” Moustakas said. “I got a good fastball and didn't miss it. I stayed inside enough to keep it straight.”

Moustakas also doubled and scored in the eighth. Sean Doolittle (1-0) struck out two in a perfect seventh, and Amir Garrett allowed a run but completed his first save.

Phillip Evans and Colin Moran both homered off De León in the first inning.

“Those won't kill you,” De León said. “I was able to settle in after those solo homers. I took it personal. I was more aggressive.”

The Reds’ offense has produced 30 runs over the first four games of the season, after scoring 27 in the first three games for the first time since 1976.

Reds pitchers held the Pirates to just one hit over the middle seven innings until Bryan Reynolds homered in the ninth.

“I think De León did a nice job," Pirates manager Derek Shelton said. “He settled down after the two homers in the first. Really used his fastball effectively. Located his fastball, used it later in counts, and it gave us a little trouble."

Both starting pitchers in Monday's game collected their first major league hits. Pirates right-hander JT Brubaker, who grew up in nearby Springfield, Ohio, and allowed a run through four innings in his second career start against the Reds, singled in the third. De León’s first major league hit and RBI in his first at-bat since 2016 got the Reds on the board in the second.

“When I put it in play, I knew we needed a base hit, so I hustled down the line,” De León said. “I was like, ‘Is this really happening?”

Reds right-hander Sonny Gray, who began the season on the 10-day injured list with a muscle strain in his back, threw 60 pitches over 4 2/3 innings at the Reds’ alternate training site in Louisville, Kentucky, on Monday. “I felt really, really good,” Gray said. “I wanted to treat it like a normal start as much as I could. I was very pleased.”

Reds outfielder Jesse Winker has not played since leaving Saturday’s game with flu-like symptoms. He has not tested positive for COVID-19, according Bell.

Reds left-hander Wade Miley makes his season debut after injuries limited him to 14 1/3 innings last year, while right-hander Trevor Cahill debuts for the Pirates after signing a one-year deal in March.