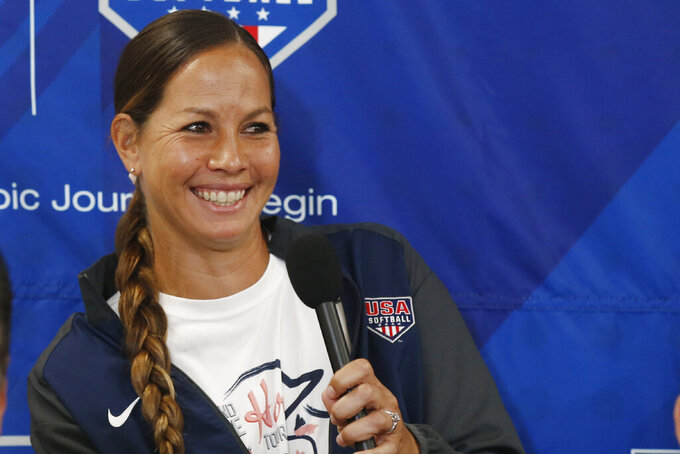 FILE - In this Oct. 8, 2019, file photo, pitcher Cat Osterman smiles as she answers a question during a news conference to announce the USA Softball 2020 Women's Olympic Team in Oklahoma City. Osterman is the first Athletes Unlimited softball champion. The league crowned her its individual champion on Monday, Sept. 29, 2020, based on points scored in games played during a five-week season played in a bubble at a sports complex in Rosemont, Ill. The 37-year-old left-hander compiled 2,408 points, followed by Jessica Warren, Victoria Hayward and Erika Piancastelli. (AP Photo/Sue Ogrocki, File)

The league crowned her its individual champion Monday based on points scored in games played during a five-week season played in a bubble at a sports complex in Rosemont, Illinois. The 37-year-old left-hander compiled 2,408 points, followed by Jessica Warren, Victoria Hayward and Erika Piancastelli.

Osterman retired in 2015 and returned in 2018 for a chance to play in the Olympics. She valued the chance to get high-level competition again, especially during a pandemic. And she appreciated the chance to re-connect with the players and fans; all 30 games were broadcast or streamed through various partners.

“I think this was an incredibly important opportunity for not only us athletes, but also giving the fans a sense of normal, being able to watch their favorite athletes play,” she said.

The league featured 57 of the top players in the world, including 19 Olympians from the United States, Canada, Mexico and Italy. Haylie McCleney was named Defensive Player of the Year. She was chosen by a vote that included the players.

With the Olympics being pushed back to 2021 because of the pandemic, the league provided an opportunity for players to keep their skills sharp. The league said Tuesday it will return next year.

“As soon as we got delayed, all of us were like, ’OK, we have to figure out a way to be a part of Athletes Unlimited,” Osterman said. “‘We have to figure how to do something to keep ourselves going.’ This filled a void in training and mentally as far as being able to get on the field and feel normal again.”

Osterman added to a long list of honors. She was an Olympic gold medalist in 2004 and a silver medalist in 2008. She was slated to be on the Olympic team this year before the COVID-19 pandemic caused the Games to be postponed. In college at Texas, she was a three-time USA Softball Collegiate Player of the Year.