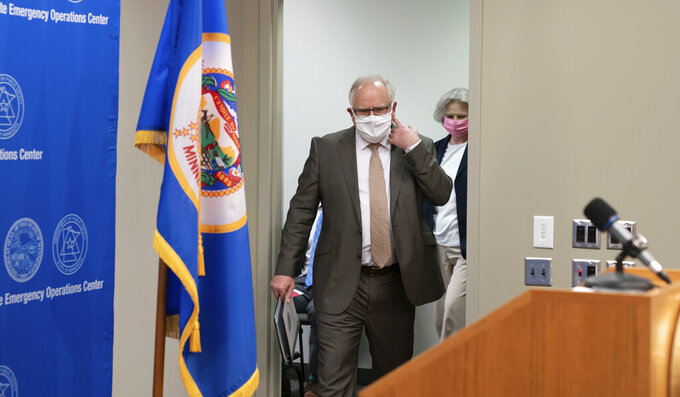 Minnesota Governor Tim Walz arrives to speak at a news conference about the state's response to the coronavirus outbreak Wednesday, May 20, 2020. Restaurants and bars may reopen June 1 for outdoor dining with social distancing and other safeguards in place, while salons and barbershops will also be allowed to resume business at partial capacity. (Glen Stubbe/Star Tribune via AP, Pool) 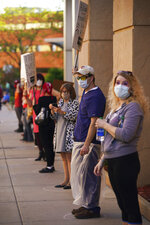 MINNEAPOLIS (AP) — Roman Catholic and Lutheran Church-Missouri Synod congregations across Minnesota plan to resume worship services in defiance of the state's ban on gatherings of more than 10 people, their leaders said Thursday, the strongest direct challenge to Gov. Tim Walz's restrictions to slow the spread of the COVID-19 pandemic.

The leaders said at a news conference that the ongoing restrictions are an unconstitutional violation of their churches' religious freedom, given that bars, restaurants, shopping malls and tattoo parlors are now being allowed to reopen. They said they shut down voluntarily in the early days of crisis but that executive orders now prevent them from holding normal in-person services.

“Being ordered to stay at home may have been necessary to protect the public health, but it came at immense costs,” including spiritual costs, said Archbishop Bernard Hebda, leader of the Archdiocese of St. Paul and Minneapolis and the Minnesota Catholic Conference.

The Minnesota Department of Health on Thursday reported a new one-day high of 32 deaths from COVID 19, raising Minnesota's death toll to 809, with 539 newly confirmed cases for a total of 18,200. The number of people hospitalized with the disease reached a one-day high of 566, with 229 patients in intensive care, tying highs set Monday and Tuesday.

In another development Thursday, Minneapolis Mayor Jacob Frey ordered people to wear masks or other cloth face coverings starting Tuesday when they’re inside stores, hotels, recreation centers, the skyway system and other government buildings. Businesses won’t be required to provide masks to customers or employees, though employers will be required to mandate the use of masks by their workers. Violations could be punished by fines up to $1,000.

Catholic and LCMS churches plan to resume worship services Tuesday next week, with their first Sunday services May 31 on Pentecost Sunday. Churches will be limited to 33% of their normal capacity, with seating in only every third row. Families will sit together but will be separated from other worshipers. Other hygiene protocols will also be in place.

“Now that the state has deemed the risk of spreading coronavirus low enough to open noncritical businesses, we believe that we can responsibly and safely allow our communities to open in accordance with accepted public health guidelines,” said the Rev. Lucas Woodford, president of the Minnesota South District of the Lutheran Church-Missouri synod.

Woodford said they had reached out to Walz and Attorney General Keith Ellison, including in letters sent Thursday, but that the state officials had declined to engage with the church leaders "in any meaningful way."

Many other churches across Minnesota and the country have switched to online worship. Minnesota churches in the Evangelical Lutheran Church in America, the state's largest Protestant denomination, are not currently holding in-person services and continue to look to health officials for guidance.

Some smaller churches are suing the state to block enforcement of the restrictions on in-person worship. But Hebda and Woodford hope their challenge doesn't come down to a lawsuit, said Eric Rassbach, vice president and senior counsel at the Becket Fund for Religious Liberty, which is representing the two leaders. He said they would rather work with the governor and attorney general.

Walz and health department officials plan to meet with the Archdiocese this week, Walz spokesman Teddy Tschann said in an email.

“As the Governor has said, this is a challenging situation for him personally and a challenging situation for him as a public official charged with protecting the health and safety of Minnesotans,” Tschann said. “He remains in routine communication with faith leader across the state and understands the toll this pandemic is taking on the spiritual health of Minnesotans.”

When Walz announced plans Wednesday to let restaurants and bars reopen for outdoor dining and personal care businesses to reopen with restrictions June 1, he said he struggled with what to do about churches. The state's guidelines still cap worship services indoors or outdoors at 10 people, though drive-in services are allowed. The governor said predictability about how the virus might spread in such situations remains a concern.

“There is a very strong sense of urgency to figure this piece around churches,” Walz said, declining to set a timeline.

Ellison’s office did not immediately respond to a request for comment Thursday.

Health Commissioner Jan Malcolm acknowledged at her department's daily briefing that state officials “have a job to do to better explain the basis for our concerns.”

The department’s infectious disease director, Kris Ehresmann, said one concern at her place of worship has been the emotional pull for members in vulnerable groups who would want to attend if in-person services resumed.

By Rassbach’s count, at least 28 states have no restrictions on worship amid the pandemic. Some never had any, while others have eased them, he said.