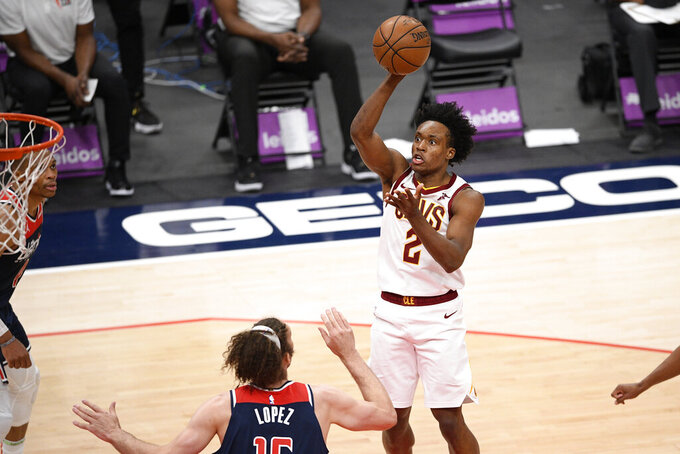 CLEVELAND (AP) — The night before their season finale, the Cavaliers ditched their masks and got together for a team dinner on a rooftop in Brooklyn — a symbolic high point.

The view was awesome, the ambience exquisite. Finally, something a little more familiar.

Barely anything else was normal over the previous five months.

“Not making any excuses,” said Cavs coach J.B. Bickerstaff, “it was one of the most difficult seasons that I’ve been a part of — for numerous reasons.”

There were the mandated COVID-19 protocols. There were numerous injuries (star forward Kevin Love played just 25 games), drama (Kevin Porter Jr. was traded to Houston after a locker-room tantrum) and head-scratching decisions (center Andre Drummond went from starter to outcast).

And, of course, there was losing, so much losing.

One of the league's youngest teams, the Cavs dropped 16 of their last 18 games to finish 22-50 — tied for the fourth-worst record in the NBA to guarantee Cleveland another spot in the draft lottery and another year hoping for the kind of luck that brought the franchise success before.

The Cavs started the 2020-21 season with a goal of making the play-in tournament, but they fell far short and missed the playoffs for the third year in a row. They're 60-159 since LeBron James left Cleveland for the second time as a free agent.

Bickerstaff's job appears to be safe. He and his staff successfully developed young guards Darius Garland and Collin Sexton, brought along rookie Isaac Okoro, who showed offensive upside in the final two months, and Cleveland's coaches got the most out of having to use numerous unproven players with G League resumes.

General manager Koby Altman may have a tougher time convincing chairman Dan Gilbert and his ownership team that he deserves more time in this rebuild. Beyond the abysmal record, the Cavs don't seem to have a clear vision of what they want to be and there are questions about their culture.

Bickerstaff, who due to injury used 30 different starting lineups, believes the Cavs are moving in the right direction.

There's no denying they played hard for him, and although the results don't show it, there are signs of progress and growth.

“I am hopeful that we can bring the group back together, because continuity is so important,” Bickerstaff said. "Obviously, the organization will do what it needs to do to make sure that we’re always improving. But we all know the more continuity you have, the better the teams are.

"And the more common that bond is, the more they have those shared experiences, the better the team can be."

The five-time All-Star's future is the club's biggest offseason issue — and its trickiest.

He's 32 with two years and $60 million guaranteed left on a four-year contract extension the Cavs probably regret giving him. Love struggled with a calf injury all season, and his on-court flare-up last month increased speculation he's checked out in Cleveland.

Trading him will be tough, unless the Cavs are willing to swallow some of his salary. It may be time for both sides to move on.

He's mesmerizing and maddening — sometimes in the same possession.

The 22-year-old had a solid season, averaging a team-high 24.3 points per game. He's a bona fide scorer, but there are too many times when Sexton seems to be playing by himself. There are holes in his game as a playmaker and defender.

The Cavs love his energy, worth ethic and ability to put the ball in the basket. They can offer him a maximum contract extension this summer, but have to first decide if he's a cornerstone piece and a match with Garland or an asset to acquire other talent.

In his second season, Garland showed he can be the playmaking guard the Cavs have lacked since Kyrie Irving forced his trade.

Unfortunately, he also been a bit injury prone, missing 18 games with shoulder and ankle issues.

Okoro's defense stood out from the start and he held his own while guarding some of the game's best offensive players.

But over the last month, he attacked the basket with more frequency and ferocity. He scored a season-high 32 in a loss to Phoenix on May 4.

The Cavs covet a wing scorer, and Oklahoma State's Cade Cunningham would seem to be a perfect fit as the presumed No. 1 pick.

Trouble is, Cleveland isn't assured the top selection. There's plenty of other talent — Gonzaga guard Jalen Suggs, USC center Evan Mobley — which can help the Cavs get better. But Cunningham, who seems to have the most complete all-around game among the top prospects, could be a franchise changer.