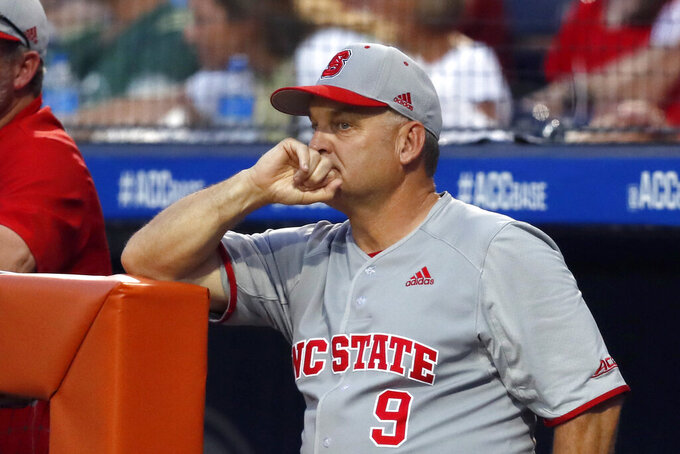 FILE - In this May 25, 2019, file photo, North Carolina State coach Elliott Avent watches during the late innings of an NCAA college baseball game against Georgia Tech in the semifinals of the Atlantic Coast Conference tournament in Durham, N.C. Avent's Wolfpack overcame a 1-8 start in ACC play to return to the College World Series for the first time since 2013. (Ethan Hyman/The News & Observer via AP)

Despite regularly sending teams to Omaha, the ACC has just two titles, most recently from the Cavaliers six years ago. Either the unseeded Cavs or Wolfpack must extend the surges that brought them this far for the ACC to get another.

“I don’t want to say the ACC is necessarily cursed or anything,” Virginia outfielder Chris Newell said with a chuckle this week. “But we’ve got two teams in it this year and hopefully we want to come out on top.”

N.C. State (35-18) opens against No. 9 national seed Stanford on Saturday in the Wolfpack’s third trip to Omaha and first since 2013. Virginia (35-25) faces No. 3 seed Tennessee on Sunday in the Cavaliers’ fifth appearance, and it comes after the program had missed the past two NCAA baseball tournaments.

This marks the 10th time in 15 tournaments that the ACC has sent multiple teams to the College World Series, and the league has had eight schools combine to send at least one every year dating to 2006.

Those 26 berths in Omaha between 2006-19 are second to the Southeastern Conference (33), and ahead of the Pac-12 (16). Yet the SEC claimed six championships and the Pac-12 five in that span, while the ACC managed only Virginia's 2015 title.

The ACC's only other championship came from Wake Forest in 1955 in the league's second season (Miami’s four titles came before joining the league).

“I don’t think there’s anything in the water that makes the ACC unable to win in Omaha,” said Aaron Fitt, co-editor and national writer for D1Baseball.com. “They have good teams. They have talent. … Part of it is just bad luck. It’s just one of those fluky things that happens in sports. I don’t think there’s a deeper reason.

"It’s a good baseball league. They’ve had lots of teams there, but they haven’t been able to close the deal.”

Neither of the league's latest Omaha entries seemed likely to be there in March.

It was a bumpy start for the Wolfpack, including COVID-19 concerns forcing the cancellation of a three-game series against Duke and a nonconference game against Coastal Carolina. And coach Elliott Avent said multiple players were banged up early, such as freshman shortstop Jose Torres battling an oblique strain, as the Wolfpack sputtered to a 4-9 start that included a 1-8 ACC record.

But the Wolfpack got healthier and thrived behind maturing freshman pitchers Sam Highfill, Chris Villaman and Matt Willadsen – who all played in the pandemic-shortened 2020 season — and went 31-9 the rest of the way.

N.C. State overcame a 21-2 loss to No. 1 national seed Arkansas in the opener of best-of-3 super regional series by winning the last two on the road. Highfill, Villaman and Willadsen combined to allow six hits and four earned runs in 13.1 innings in the wins, while Torres – another freshman who played in 2020 – hit the go-ahead ninth-inning homer.

“I think it’s basically getting our lineup in the lineup every day, and then sticking to it,” Avent said. “When you start out 1-8, you’ve got to have a lot of character and a lot of will to win and lot of commitment in that locker room to start out that way and be where we are now."

As for the Cavaliers, they started 4-12 in ACC play, leading to a team meeting that included coach Brian O’Connor telling his players they had to get to .500 in the league to make it back to the tournament.

Virginia went 24-11 from there and finished 18-18 in the league, then survived six NCAA elimination games before taking the decisive third game of the super regionals against Dallas Baptist. An offensive uptick has helped; the Cavaliers went from averaging 4.6 runs through 25 games to 6.5 in the 35 since.

“The goal is not accomplished,” O’Connor said. “Everybody talks about getting to Omaha and every college baseball program, that’s a focus and goal of every team. Our focus is to get to Omaha and win.”

The ACC is hoping either the Cavaliers or Wolfpack can do just that.