CBS to air Emmy Awards on Sept. 19; no host yet 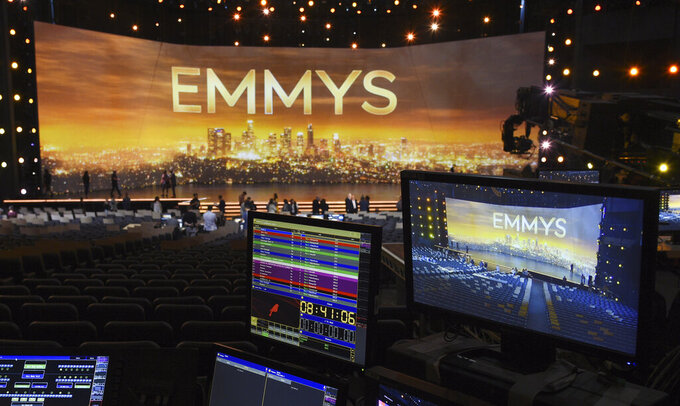 FILE - A video monitor displays the stage for Sunday's 71st Primetime Emmy Awards during Press Preview Day in Los Angeles on Sept. 19, 2019. The Emmy Awards will be held on Sept. 19 and air live on CBS. (Photo by Chris Pizzello/Invision/AP, File)

LOS ANGELES (AP) — The Emmy Awards will be held on Sept. 19 and air live on CBS.

The network and the Television Academy announced Tuesday that the 73rd annual ceremony will stream live and on demand on Paramount+, the streaming service that launches March 4.

The host, producers and location for the Emmys will be announced later. Since 2008, the show has been held at Microsoft Theater in downtown Los Angeles.

Last year’s show on ABC was hosted by Jimmy Kimmel and was a combined in-person and virtual event. Kimmel was live at the Staples Center in downtown Los Angeles, and most presenters and nominees appeared remotely because of the coronavirus pandemic. That format was also used for the recent Golden Globes.

The 2020 Emmys were the lowest rated with 6.4 million viewers.

As part of the broadcast networks taking turns, CBS last aired the Emmys in 2017, when Stephen Colbert hosted.