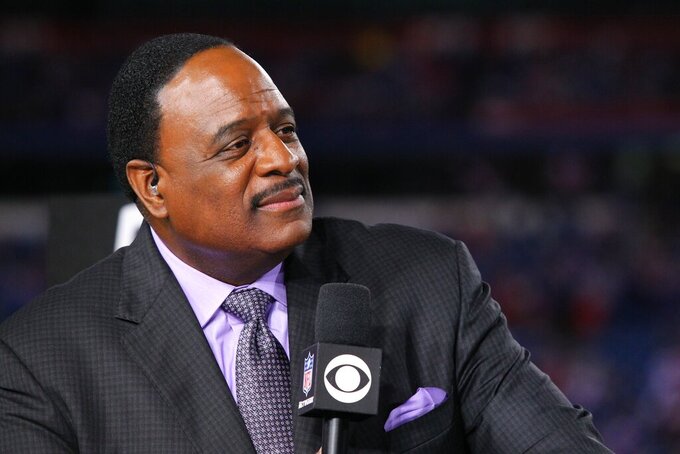 FILE - In this Sept. 15, 2016, file photo, CBS Sports commentator James Brown works the NFL football game between the Buffalo Bills and the New York Jets in Orchard Park, N.Y. Brown is familiar with hosting Super Bowl pregame shows during times when the day transcended beyond the teams competing for a championship. (AP Photo/Bill Wippert, File)

CBS' James Brown knows what it is like to host Super Bowl pregame shows when the day transcended beyond the teams competing for a championship.

Brown hosted Fox's pregame for the 2002 Super Bowl, which occurred nearly five months after 9/11. With the coronavirus pandemic still at the forefront, Brown realizes Sunday's “Super Bowl Today” show could offer the same opportunities, but in a different manner.

“Typically, sporting events offer a respite to get away and to enjoy hopefully a competitive game. People are looking for that kind of relief and coming off of all that we’ve gone through, there’s a strong desire, hopefully, to become more unified,” Brown said. “It will be in a different sense of 9/11 because that was a celebration of withstanding the attempt at our country, but it was very patriotic and unifying. This is a different kind of backdrop where many people have just been fatigued, given all of the challenges that we’ve had to endure during this time.”

This will be a record 10th Super Bowl pregame hosted by Brown and his sixth for CBS. He didn't even know that anyone kept track until someone mentioned two years ago that he tied Brent Musburger, who coincidentally anchored seven of his nine with CBS.

“I never even gave any thought to it. I’ve just been so focused on being prepared to set my teammates up for them to look good and just to do my job,” he said.

Brown called NFL games on CBS for seven seasons during his first stint at the network. He became the pregame host for Fox in 1994 when they outbid CBS for the rights to the NFC package. Brown then returned to CBS in 2006 to helm “The NFL Today,” and has been a guiding presence on a show that went through plenty of changes in the first eight seasons after the network returned to doing games.

A standout basketball player at Harvard, Brown has shown the skills of a point guard in the way he can introduce features along with getting analysts Boomer Esiason, Phil Simms, Bill Cowher and Nate Burleson involved.

“He’s what I call comfort food. He’s our comfort food because we know that we’re in good hands with maybe the best studio host in the history of the sport,” Esiason said.

Burleson added that the best quality about Brown is that he knows each person has their own style and plays to their strengths.

“I think that’s the mark of a great leader and a great coach for what it’s worth,” he said. “As we’re getting ready for the Super Bowl, you know JB will ask you a simple question that you know he knows the answer to about football but really all he’s doing is allowing me to talk so I have more confidence in myself.”

While Super Bowl pregames usually serve as showcases for the host city and the two teams, CBS has features planned saluting health care workers, Kenny Washington (who re-integrated the NFL in the 1940s), women in the NFL and Whitney Houston’s national anthem performance at the Super Bowl 30 years ago, which was also in Tampa.

The show will also serve as a showcase of the ViacomCBS merger, which was completed 15 months ago. Comedy Central, Showtime, Nickelodeon, “The Late Late Show with James Corden” and CBS News will contribute features or interviews. CBS Evening News anchor Nora O’Donnell will have the first sit-down interview with President Joe Biden.

There will also be features analyzing the Tampa Bay Buccaneers and Kansas City Chiefs, including the much-anticipated matchup between Tom Brady and Patrick Mahomes.

Brown also realizes that if there is some sort of delay during the game, he may be called on at a moment's notice. That was the case in 2013 when a power outage at the Superdome caused a delay during the third quarter between the Baltimore Ravens and San Francisco 49ers. The delay would later be the result of a “Saturday Night Live” skit with Kenan Thompson portraying Brown.

But when it comes to Sunday at 2 p.m. ET, Brown's philosophy in navigating a four-hour show won't be any different than what he does during the season — plenty of research and making sure those around him perform at their best.

“I want to be prepared so that I can help you know, elicit the best from them,” he said. “There's still going to be the chemistry, camaraderie, and good-natured fun. But you will have a significant number of casual fans who will be coming to the broadcast, so it is up to us to bring those eyeballs up to speed and set the table. I don’t think there’s a better group than these guys, and I’m thrilled to do it.”