CDC: West Virginia HIV wave could be 'tip of the iceberg' 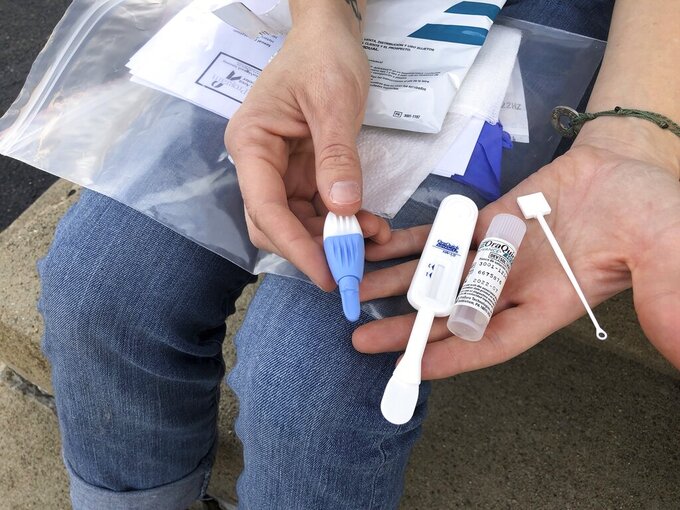 CHARLESTON, W.Va. (AP) — For years, West Virginia has had the nation’s highest rate of opioid drug addictions and drug overdose deaths. Now the state is wrestling with another, not entirely unrelated health emergency: one of the nation's highest spikes in HIV cases related to intravenous drug use.

The surge, clustered primarily around the capital of Charleston and the city of Huntington, is being attributed at least in part to the cancellation in 2018 of a needle exchange program that offered clean syringes to injection drug users not able to quit the habit altogether.

Needle exchange programs are included in the Centers for Disease Control and Prevention’s recommendations for controlling disease outbreaks among intravenous drug users. Such programs exist in dozens of states, but they are not without their critics, including in West Virginia, who say they don’t do enough to prevent or stop drug abuse.

The coronavirus has further complicated the problem. Local health officials have been in a bind partly because the resources required to fight the pandemic have made widespread testing for hepatitis, HIV, and other sexually transmitted diseases especially challenging, said Dr. Sherri Young, health officer of the Kanawha-Charleston Health Department.

As recently as 2014, only 12.5% of HIV cases in West Virginia were the result of intravenous drug use. By 2019, 64.2% were, according to state health department data. The increase was due primarily to clusters in Kanawha and Cabell counties.

Kanawha County, which includes Charleston and has 178,000 residents, had two intravenous drug-related HIV cases in 2018. The number grew to 15 in 2019 and at least 35 last year, said Shannon McBee, a state epidemiologist.

By comparison, New York City, with a population of more than 8 million, recorded 36 HIV cases tied to intravenous drug use in 2019, according to the CDC. Counties in other states with populations similar to Kanawha had an average of less than one HIV diagnosis among people who inject drugs, said Dr. Demetre Daskalakis, the CDC’s chief of HIV prevention.

In a recent presentation, Daskalakis called the outbreak in Kanawha County “the most concerning in the United States.” At a meeting of a Kanawha County HIV task force last month, he warned it could take years to address the surge.

“It is possible the current case count represents the tip of the iceberg,” Daskalakis said. “There are likely many more undiagnosed cases in the community. We are concerned that transmission is ongoing and that the number of people with HIV will continue to increase unless urgent action is taken.”

Health officials have said needle exchange programs have been shown to reduce the spread of communicable disease. But city leaders and first responders complained that such a program in Kanawha County led to an increase in needles being left in public places and abandoned buildings, and it was shut down.

The nonprofit organization Solutions Oriented Addiction Response, first founded to tackle the opioid epidemic, has stepped into the breach. In addition to providing addicts with clean needles in Charleston, the group shares information about HIV testing with residents, including the homeless, said SOAR co-founder Sarah Stone.

“We started doing our thing about 18 months ago because we knew it was coming,” Stone said.

Now that coronavirus numbers are falling, county officials are also returning their attention to the HIV epidemic. They plan to ramp up testing, increase public awareness and roll out mobile clinics to treat patients who may not have regular doctors or seek medical treatment on their own.

For both HIV and the coronavirus, “we are going to be all hands on deck,” Young said.

Similar efforts in Cabell County, where Huntington is located, have already led to a drop in HIV numbers there, health officials said. Cabell County officials partially credit a needle exchange program they implemented in 2015. Kanawha County officials have no plans at this point to revive their program, however.

The state Senate passed a bill earlier this month that would require needle exchange providers to obtain a license and also provide an array of other health outreach services, including overdose prevention education and substance abuse treatment program referrals. Stone said such a bill could shut down her needle exchange operation.

“Public health has a mandate to prevent and control the spread of communicable diseases,” Stollings told lawmakers recently. “They will not be able to do that with this bill passing. We’re pouring gasoline on the fire.”

Dr. Sally Hodder, a West Virginia University infectious disease expert, said the opioid epidemic and the HIV clusters are “so interconnected, we have to look at this as one larger issue, and treat it as such.”

“In places such as West Virginia, where the collapse of the coal mining industry and extreme poverty have exacerbated the opioid epidemic, decriminalizing substance abuse, providing clean, safe places for syringe service programs and other interventions, and offering comprehensive HIV prevention, care and treatment services are all essential to ending these intertwined epidemics,” Hodder said.