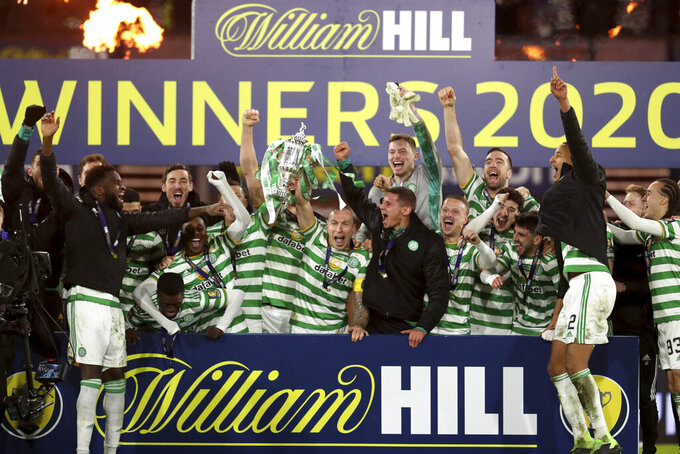 GLASGOW, Scotland (AP) — Neil Lennon became the first person in Scottish football to win the domestic treble as a player and manager after Celtic won the Scottish Cup final on Sunday.

The 4-3 penalty shootout win over Hearts ensured the pandemic-disrupted 2019-20 season was finally completed even as a new season is underway.

Lennon also completed a sweep of domestic titles as Celtic captain in 2001 as a midfielder under Martin O’Neill.

The victory, which followed a 3-3 draw after extra time, also ensured Celtic completed an unprecedented quadruple domestic treble with the Glasgow club's 40th Scottish Cup win its record fourth in a row.

It is a boost for Lennon who has come under pressure with Celtic second in the Scottish Premiership in the 2020-21 season, 16 points behind Glasgow rival Rangers, albeit with three games in hand.

“I must be doing something right," Lennon said. “If it was that easy it would have been done long before me. It is unique, I feel unique at the minute. It is something very special to me.

“I said to the players, ‘I need this as much as you need it.' And you seen them all at the end, how much they felt for me as well and my backroom team, who are important to me. It is a culmination of a lot of hard work over 20 years but I feel fantastic."

Conor Hazard, the 22-year-old Northern Ireland goalkeeper making just his third appearance for Celtic, was the hero with two penalty saves in the shootout.

The Hoops seemed to be cruising at halftime through goals from Ryan Christie and Odsonne Edouard, who scored a "Panenka" penalty.

But Hearts striker Liam Boyce reduced the deficit three minutes after halftime before defender Stephen Kingsley leveled in the 66th minute, both with headers, to send the final to extra time.

Leigh Griffiths put Celtic ahead in the 105th before fellow substitute Josh Ginnelly leveled for Hearts.

Griffiths and Callum McGregor scored in the shootout before Hearts keeper Craig Gordon saved from Christie.

Steven Naismith, Michael Smith and Olly Lee netted their penalties before Hazard denied Kingsley and Craig Wighton and, after Mikey Johnston had scored to make it 3-3, Kristoffer Ajer drove in the winning spot kick to spark scenes of delight at Hampden Park.