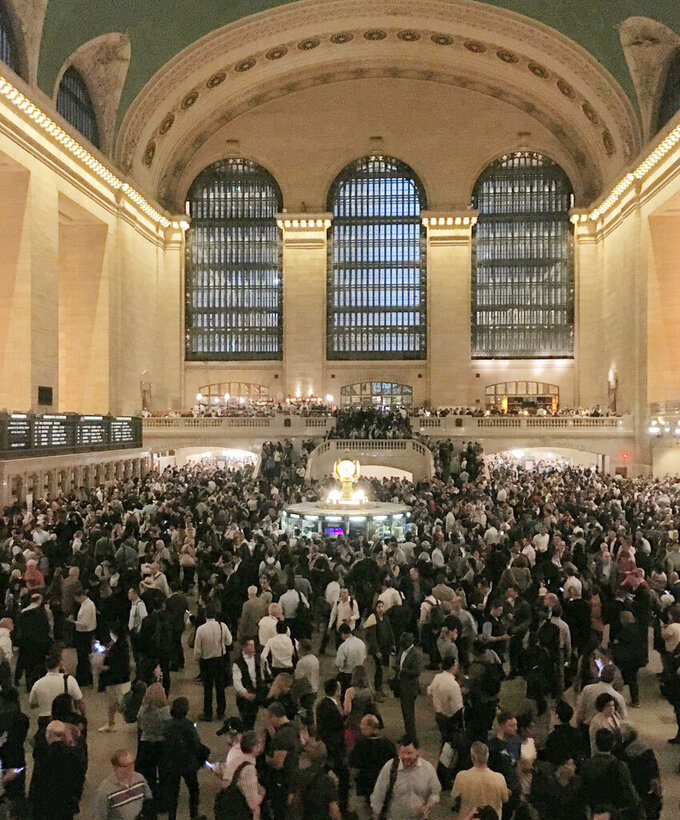 Commuters crowd the Grand Central Terminal in New York on Tuesday, May 15, 2018. Asian American households saw the biggest income growth of any racial or ethnic group in the United States over the past decade and a half _ almost 8%. New figures released Thursday, Dec. 10, 2020 by the U.S. Census Bureau also show that household income for Latinos grew by almost 6% over that time. (AP Photo/Donald King, file)

U.S. Census Bureau officials issued a range of population estimates Tuesday that are wholly separate from the once-a-decade head count of every U.S. resident, saying the figures will help evaluate the accuracy of the official 2020 Census numbers set to be released next year.

Demographic Analysis estimates discussed by Census officials during an online news conference are based on government birth, death, international migration and Medicare enrollment records as of April 1 — not the results from questionnaires returned by residents and data gathered by Census takers this year. They are not taken from official Census response data, nor are they part of the official count.

The numbers released Tuesday were organized in a series of low, middle and high estimates. The national population estimate ranged from 330.7 million on the low end, 332.6 million in the middle, and 335.5 million on the high end.

Those estimates and others are expected to help the Census Bureau understand the quality of its official data, which is still being analyzed, and could help determine whether minority groups and other populations are properly counted.

“Demographic Analysis is a very important evaluation of the quality of the decennial Census,” said Eric Jensen, senior technical expert for demographic analysis in the Census Bureau’s population division.

Information from the actual Census count will be used to determine apportionment of seats in the U.S. House of Representatives and how more than $1.5 trillion in federal funding is distributed. Demographic Analysis data can tell the Census about errors for specific age, sex, race and Hispanic origin groups at the national level, Census officials said.

Some experts and Census watchdogs have raised concerns over the Census count, which has seen its share of challenges this year related to the coronavirus pandemic. Advocacy groups have argued in court that a push by the Trump administration to end the count early could leave some populations undercounted.

However, in late July and early August, officials at the Commerce Department announced field operations would finish at the end of September and the apportionment numbers would stick to a congressionally mandated deadline of Dec. 31.

But documents leaked to the House committee that oversees the Census Bureau suggest the apportionment numbers won’t be ready until after Jan. 20, when Trump leaves office and President-elect Joe Biden moves into the White House. The Census Bureau has acknowledged the discovery of data irregularities in recent weeks that put the Dec. 31 deadline in jeopardy.