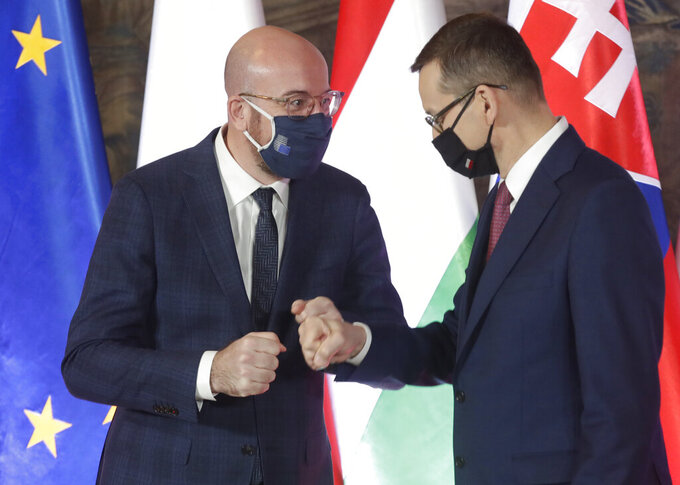 WARSAW, Poland (AP) — Central European leaders pushed Wednesday for faster deliveries of COVID-19 vaccines from every reliable manufacturer to speed up inoculations which they said is the way to conquer the pandemic and jump-start Europe’s economic recovery.

The leaders of Hungary, Slovakia and Poland said they support purchasing vaccines from manufacturers regardless of “geopolitics” provided they are safe and effective. Hungary is the European Union's first and so far only member state to administer Russia's Sputnik V vaccine without waiting for approval from the European Medicines Agency.

“There is no Eastern or Western vaccine, there is only a good or a bad vaccine,” Hungary's Prime Minister Viktor Orban told a news conference in Krakow, Poland. “It is not good to be too political about the health security of the people.”

Slovakia's Prime Minister Igor Matowic and Mateusz Morawiecki of Poland backed Orban. The EU has not been receiving the full scheduled amounts of some 2 billion vaccine doses it has signed agreements for with Western drug makers.

The leaders were speaking at a meeting to mark the 30th anniversary of the Visegrad Group, an informal body of political and economic cooperation between Poland, Hungary, The Czech republic and Slovakia. Hosted by Morawiecki, it brought together Orban, Matovic and Czech Prime Minister Andrej Babis.

European Council President Charles Michel, who attended the celebrations, said EU leaders will discuss next week ways of increasing vaccine production and of speeding up inoculations.

The EU announced Wednesday that it has agreed to buy a further 300 million doses of Moderna’s vaccine and was pumping almost a quarter of a billion euros (almost $300 million) into efforts to counter the threat of coronavirus variants that are spreading throughout the continent.

The development came on top of an announcement by Pfizer and BioNTech that they had signed a deal to deliver an additional 200 million doses of their vaccine to the bloc.

Michel hailed the V4 group's development and role in the EU but stressed that it must be “based on principles of democracy.”

The words seemed directed at Hungary and Poland that are seen as the EU’s recalcitrant members, often criticized for perceived political interference in areas like the judiciary and media freedom.

Orban said earlier Wednesday that the role of Central European nations is to help protect the EU from external threats but also against the bloc's own “tendencies" at empire building, while guarding their own independence.

The leaders also signed a declaration of cooperation in the cyber sector.

The V4 was founded in February 1991 from a declaration of cooperation that then-Presidents Lech Walesa of Poland, Vaclav Havel of the former Czechoslovakia and Jozsef Antall of Hungary signed in Visegrad, Hungary. Those countries joined the EU in 2004.

Poland currently holds the group’s 12-month rotating presidency and will hand it over to Hungary on July 1.

After Wednesday’s meeting, Poland’s Morawiecki and Hungary’s Orban held bilateral talks and attended a ceremony at Wawel Castle for handing over a suit of armor made for 16th century King Sigismundus II Augustus that had been housed in a Budapest museum.