Céspedes expects to be DH for Mets on opening day 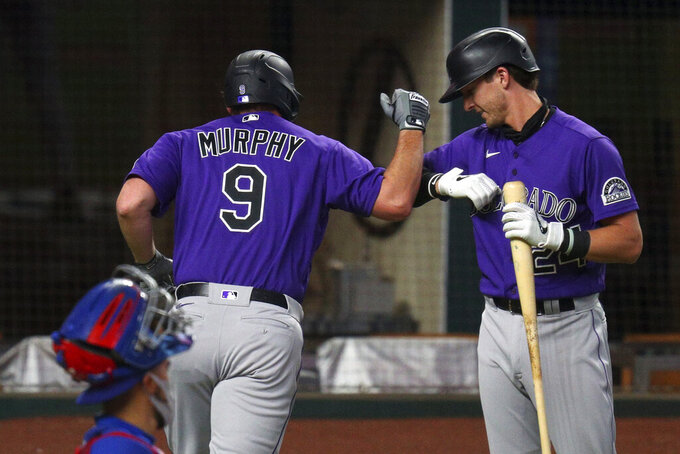 Yoenis Céspedes expects to be the designated hitter for the New York Mets on Friday when they open the season against the Atlanta Braves.

It will be his first major league game in more than two years. Injuries to his feet and legs have sidelined him since July 20, 2018.

Céspedes said he’s feeling good and is confident that he’ll also play left field at some point this season. But he told reporters through a translator Tuesday that “at least for the first game, for opening day, I’ll be the DH.”

The 34-year-old slugger, an All-Star in 2014 and 2016, had surgery on both heels and then broke his right ankle in a nasty fall at his Florida ranch. Now he's healthy and eager to help the Mets.

“I think the strongest part of me is my mind, is my mentality,” Céspedes said. “I think whether it’s a good day or a bad day, my mentality has always been strong. I’ll be ready to play once the time comes.”

The 2017 AL MVP was injured in a collision at home plate in the fourth inning of the 15-6 win that was the Astros' last tuneup before their opener on Friday against Seattle. The team said he is listed as day to day.

Altuve hit .298 with 31 homers and 74 RBIs in 124 games last season while missing time with leg injuries.

Altuve was one of three Astros who were hit by pitches against the Royals. Kansas City right-hander Jorge López plunked Altuve and Alex Bregman, and George Springer was hit by Jackson Kowar, who took the loss.

Masahiro Tanaka threw 20 pitches during batting practice Tuesday and is on track to miss one turn in the New York Yankees' rotation before making his first start July 31 against Boston.

Tanaka walked two in his one inning. It was his first time facing batters since he was hit in the head by Giancarlo Stanton’s line drive on July 4. Tanaka is to throw batting practice again on Sunday.

“If everything comes out OK, I should be ready to go,” he said through a translator.

He did not use a protective screen. Tanaka thought about getting hit only before delivering his first pitch.

“After I threw that, it was back to business, back to normal,” he said.

The 31-year-old right-hander is 75-43 in six major league seasons and is entering the final year of his contract.

Tampa Bay Rays left-handed reliever Colin Poche will miss the season after being placed on the 45-day injured list with a torn ulnar collateral ligament in his pitching elbow. The team said Tommy John surgery has been recommended.

Catcher Kevan Smith was added to the 40-man roster to replace Poche, who went 5-5 with a 4.70 ERA in 51 appearances last season.

The Atlanta Braves signed right-hander Jhoulys Chacín, who pitched for Milwaukee and Boston in 2019, to a one-year contract. Chacín was 1-2 with a 5.40 ERA in five games with Atlanta in 2016 after signing a minor league contract with the team. Chacín was released by Minnesota on Sunday.

The 32-year-old Chacín could provide depth as left-hander Cole Hamels recovers from left triceps tendinitis. Hamels won’t be ready for Friday’s season opener at the Mets.

Norris threw a bullpen session on Tuesday and is scheduled to pitch a simulated game on Thursday.

Norris said he was tested while still in Florida but didn’t receive his positive result until he arrived in Detroit for the start of camp.

He said he was taking precautions while in Florida.

“It was crazy down there. Everything was like open and semi-normal, but I wasn’t partaking in all that,” he said. “I just kind of figured I was doing enough to not get it.”

Norris said his symptoms didn’t seem major at first — he woke up sweating a bit and achy — but in retrospect, he realized those symptoms may have been more significant.

“The heavy symptoms only lasted a few days,” Norris said. “A few days after that test, I was like, ‘I feel like 100 percent.’”

He said he sent out a message to teammates telling them not to take the virus lightly.

He has been added to the club player pool. Left-hander Bobby Poyner was removed from the pool but remains in the organization.

Left-hander Tommy Milone will start on opening day for the Baltimore Orioles on Friday night in Boston.

Manager Brandon Hyde made the announcement Tuesday before the Orioles closed out their brief exhibition schedule in Washington.

John Means was originally selected to start the opener for Baltimore, but the 2019 All-Star lefty has a sore arm and will be held back in the rotation.

The 33-year-old Milone signed as a non-roster invitee in mid-February. He was 4-10 with a 4.76 ERA with Seattle last season.

Astros television play-by-play announcer Todd Kalas will miss the start of the season after testing positive for the coronavirus. Kalas is asymptomatic but is quarantining as part of MLB’s health and safety protocols.

Kevin Eschenfelder will fill in for Kalas until he can return.

The Braves are also without one of their announcers after former Atlanta outfielder Jeff Francoeur also tested positive for the virus. Francoeur said on Twitter he is asymptomatic.

Francoeur’s 12-year career as a player from 2005-16 included five seasons with the Braves.

The Texas Rangers’ new ballpark with a retractable roof didn’t play too big for the Colorado Rockies, though it was only an exhibition game.

Nolan Aranado and David Dahl hit two-run homers, and Daniel Murphy hit a solo shot, all in five innings off Rangers starter Kyle Gibson, as the Rockies won 5-1. Colorado was the first visiting team to play in Globe Life Field, and will also be there for the regular season opener Friday night.

As will be the case for most of the hot Texas summer nights, the roof was closed.