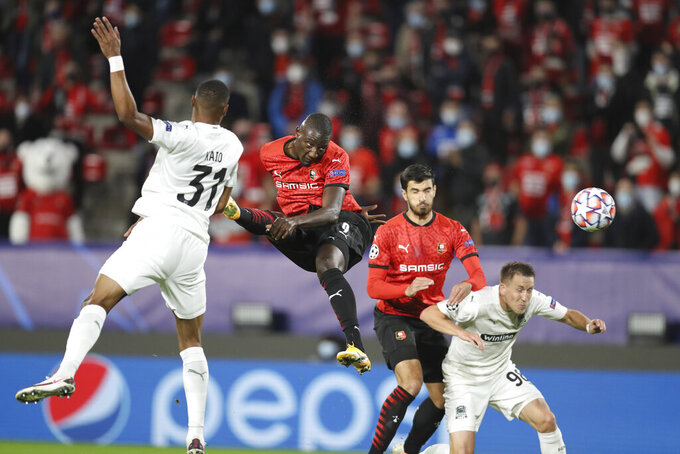 Rennes was fined 10,000 euros ($11,800), and Dynamo Kyiv and Ferencváros must each pay 5,000 euros ($5,900) for breaching safety protocols, UEFA's disciplinary panel judged. The rules include enforcing social distancing, wearing masks, and ensuring fans sit in the seats they were allocated.

Croatian club Rijeka was also found guilty of unspecified “illicit chants” by fans at a game against Real Sociedad, and fined 10,000 euros ($11,800).

The soccer federations of Croatia, Latvia and Luxembourg were each fined 5,000 euros for breaking health protocols at Nations League games.

Top coaches faced disciplinary charges for their teams being out late to kick off the second half of a game. Late kickoffs can disrupt broadcasters’ schedules.

Shakhtar Donetsk coach Luis Castro was fined 5,000 euros and banned for one game by activating a deferred suspension for a previous offense. Shakhtar next plays at Borussia Mönchengladbach on Nov. 25.

Paris Saint-German coach Thomas Tuchel and Tottenham’s José Mourinho were each put on one year of probation. The clubs were fined 30,000 euros and 25,000 euros, respectively.