Charity: Rescue ship gets OK to bring 180 migrants to Sicily 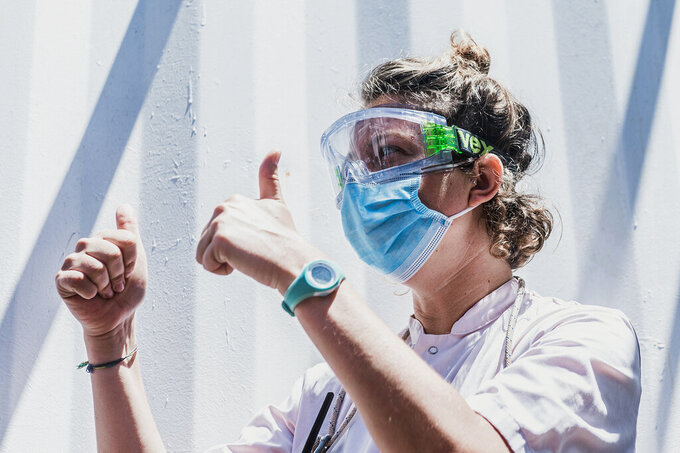 A staffer wearing a mask gives the thumb-up sign aboard the Ocean Viking ship in the Mediterranean Sea, Sunday, July 5, 2020. A humanitarian group says its rescue ship with 180 migrants stranded aboard for days has “finally” received instructions to sail to an Italian port, so its passengers can be disembarked. SOS Mediterranee in a tweet on Sunday also described “relief on the #Ocean Viking” when the ship's crew and passengers learned that the rescued migrants are to be disembarked at Porto Empedocle, Sicily, the next day. (Flavio Gasperini/SOS Mediterranee via AP)

ROME (AP) — A humanitarian group said Sunday its rescue ship with 180 migrants stranded aboard for days has “finally” received instructions to sail to an Italian port, so its passengers can be disembarked.

In a tweet, SOS Mediterranee also described “relief on the #Ocean Viking” when the ship's crew and passengers learned that the rescued migrants are to be disembarked Monday at Porto Empedocle, Sicily.

Earlier, the group said Italian medical staff came aboard to test for COVID-19.

The migrants had been rescued by the Ocean Viking in four separate operations from Libya-based human traffickers' unseaworthy boats between June 25 and June 30.

After pleas to Malta and Italy for docking permission had failed to quickly yield success, many of the migrants aboard grew increasingly desperate, and six of them tried to kill themselves out of fear no country would take them in, SOS Mediterranee said Friday.

Two of the six had plunged into the Mediterranean and were saved by crew members, the charity said.

It wasn't immediately clear if the 180 migrants would be kept in precautionary quarantine at port or taken to centers on Sicily for asylum-seekers, for initial processing of their requests to stay in Europe.

Italy had employed an unused commercial passenger ferry to put in quarantine off Sicily migrants who were recently rescued at sea by another charity group.

Both Italy and Malta have insisted that fellow European Union countries take many of the rescued migrants, who often aim to reach jobs or relatives in northern Europe. Many of the migrants, smuggled via Libya on flimsy dinghies or rickety fishing boats, are fleeing poverty, not war or persecution and ultimately are found ineligible for asylum. Many come from sub-Saharan Africa.

Despite diplomatic efforts by EU authorities in Brussels to encourage countries to share the burden of caring for some of the asylum-seekers, only a handful of member nations have agreed on a voluntary basis to accept some of the rescued migrants who are disembarked in Malta or Greece.

Early in the pandemic, Italy declared its ports unsafe for docking by private rescue ships as it sought to contain its devastating coronavirus outbreak.