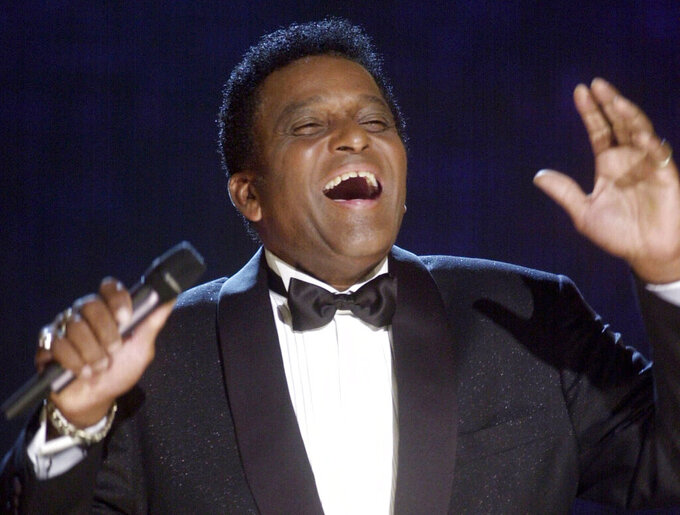 CORRECTS FIRST NAME TO CHARLEY, INSTEAD OF CHARLIE FILE - In this Oct. 4, 2000, file photo, Charley Pride performs during his induction into the Country Music Hall of Fame at the Country Music Association Awards show at the Grand Ole Opry House in Nashville, Tenn. Pride, the son of sharecroppers in Mississippi and became one of country music’s biggest stars and the first Black member of the Country Music Hall of Fame, has died at age 86. Pride died Saturday, Dec. 12, 2020, in Dallas of complications from Covid-19, according to Jeremy Westby of the public relations firm 2911 Media. (AP Photo/Charlie Neibergall, File)

NASHVILLE, Tenn. (AP) — Charley Pride wasn’t country music’s first Black artist, but he reached heights that had not been available to early Black singers and musicians in the genre. And he did it by winning over millions of country music fans.

While Pride’s career path was paved by artists like Opry pioneer DeFord Bailey, the Grammy-winner’s success put him on par with his white peers, including Willie Nelson, Glen Campbell and Merle Haggard, in a way that had never been afforded to Black artists before.

Pride, whose hits include “Kiss an Angel Good Morning” and “Is Anybody Goin’ to San Antone,” died Saturday in Dallas of complications from COVID-19, according to his publicist. He was 86.

The pride of Sledge, Mississippi, was the son of a sharecropper who initially turned to sports as a way to a better life.

He was a pitcher and outfielder in the Negro American League with the Memphis Red Sox and in the Pioneer League in Montana.

After playing minor league baseball, he ended up in Helena, Montana, where he worked in a zinc smelting plant by day and played country music in nightclubs at night.

Baseball was Pride’s first success, but it was the Grand Ole Opry that his father insisted everyone listen to on their home radio that would prove to be his lasting legacy.

“Everything we listened to was what he had tuned it to, so I got to listening to Grand Ole Opry and all when I was small and I got hooked on it and it just went from there,” Pride told The Associated Press at the Grand Ole Opry in Nashville in 2017. “I had no idea that I was preparing myself for this, but I’m glad, especially since I didn’t make it in baseball.”

After a tryout with the New York Mets, Pride visited Nashville and broke into country music when Chet Atkins, head of RCA Records, heard two of his demo tapes and signed him.

His first few singles were sent to radio stations without a publicity photo. After his race became known, a few country radio stations refused to play his music, and some promoters were hesitant to book him.

Until the early 1990s, when Cleve Francis came along, Pride was the only Black country singer signed to a major label. During his career, other Black country artists such as Linda Martell, O.B. McClinton and Stoney Edwards were also charting country songs, as well as Ray Charles and the Pointer Sisters. In 1993, he joined the Grand Ole Opry cast in Nashville.

“They used to ask me how it feels to be the ‘first colored country singer,‘ ” he told The Dallas Morning News in 1992. “Then it was ‘first Negro country singer;’ then ‘first Black country singer.’ Now I’m the `first African-American country singer.′ That’s about the only thing that’s changed. This country is so race-conscious, so ate-up with colors and pigments. I call it ‘skin hangups’ — it’s a disease.”

Still, he remains the only Black country artist to achieve many of those heights, a sign that country music still has a long way to go to breaking down the racial walls, even decades later.

Throughout his career, he sang positive songs instead of sad ones often associated with country music.

“Music is a beautiful way of expressing oneself, and I truly believe music should not be taken as a protest,” he told The Associated Press in 1985. “You can go too far in anything — singing, acting, whatever — and become politicized to the point you cease to be an entertainer.”

He was the first Black artist to win the genre’s highest prize, CMA Award entertainer of the year in 1971, over nominees Haggard, Loretta Lynn, Jerry Reed and Conway Twitty. He was the first Black co-host of the CMA Awards in 1975 with Campbell and earned a lifetime achievement award at the CMA Awards this year. He received a Lifetime Achievement Award from the Recording Academy in 2017.

Pride released dozens of albums and sold more than 25 million records during a career that began in the mid-1960s. Hits besides “Kiss an Angel Good Morning” in 1971 included “Is Anybody Goin’ to San Antone,” “Burgers and Fries,” “Mountain of Love,” and “Someone Loves You Honey.”

As a trailblazer, he inspired countless other Black country artists, including Darius Rucker, who moved from rock to country.

“My heart is so heavy,” Rucker wrote on Twitter. “He destroyed barriers and did things that no one had ever done. But today Im thinking of my friend. Heaven just got one of the finest people I know.I miss and love u CP!”

Pride joined up with country singer Jimmie Allen to perform “Kiss an Angel Good Morning” at the CMA Awards in November, his last performance.

“Thank you for unapologetically you and being the manifestation of our dreams. Our potential. The realization that WE can be anything we want to be. Even a country singer,” said country singer Rissi Palmer on Twitter. “I’m so angry about this death. This was preventable.”

“I’d like to be remembered as a good person who tried to be a good entertainer and made people happy, was a good American who paid his taxes and made a good living,” Pride told The AP in 1985. “I tried to do my best and contribute my part.”

He is survived by his wife, Rozene, whom he married in 1956; three children, Kraig, Dion and Angela; and several grandchildren.