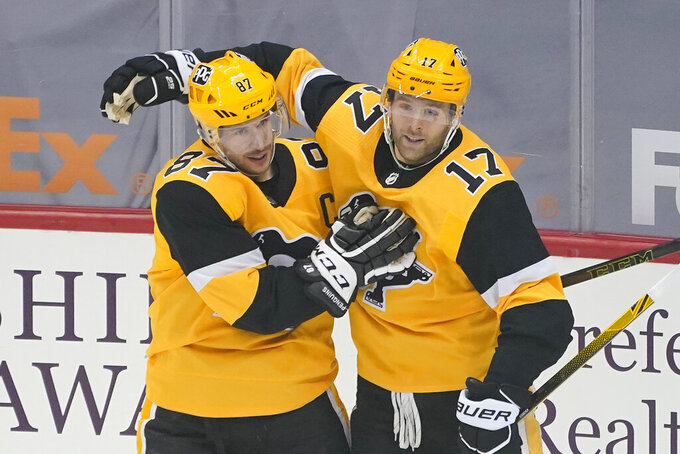 FILE - Pittsburgh Penguins' Sidney Crosby (87) celebrates his first-period goal with Bryan Rust (17) during an NHL hockey game against the New Jersey Devils in Pittsburgh, in this Thursday, April 22, 2021, file photo. In a way, the NHL's COVID-19 protocols may have been a blessing to the Pittsburgh Penguins. The rules forced the Penguins to basically hole up in the hotel while on the road, offering them time to build chemistry, one of the main reasons they were able to win their first division title in seven years. (AP Photo/Gene J. Puskar, File)

PITTSBURGH (AP) — Nearly three dozen players made their way through the Pittsburgh Penguins locker room during the regular season, a byproduct of an injury list that seemed to remain in a constant state of flux.

Some, such as captain Sidney Crosby, have been around seemingly forever. Some, such as well-traveled forward Frederick Gaudreau, stuck and stayed. Some, such as massive rookie winger Radim Zohorna, made memorable cameos before disappearing back into the ether.

Each of them, however, contributed in some way to the franchise's first division title in seven years. The Penguins rarely missed a beat — particularly over the season's final two months — even with a lineup that fluctuated from game to game and sometimes shift to shift.

And while the players pointed to coach Mike Sullivan's steady leadership and Crosby's consistent excellence as the fulcrum around which the rest of the organization swung, there may have been another accomplice: the league's COVID-19 protocols.

The policies put in place to protect the players during the pandemic created a bubble of sorts when teams went on the road. A bubble that prevented them from peeling off into small groups to go out to dinner or coffee. A bubble that often left them stranded in a way in the hotel with nothing but time on their hands and each other.

“Through the whole season, every night we were all ordering food to the hotel because that was our only means of getting food some food in us, hanging out and talking and playing games together and all that type of stuff," defenseman Mike Matheson said Wednesday.

“It was kind of like minor hockey where you spend the whole tournament just hanging out in the hotel with your teammates. And I think that was a great opportunity to get to know each other even more so than we would have in a regular season.”

A development that in some strange way may have accelerated the bonding process. One that could prove to be invaluable as the Penguins prepare to host the New York Islanders in the opening round of the playoffs.

“When teams have strong relationships off the ice, my experience has been that they play hard for one another on the ice," Sullivan said. “That could very well be one of the unintended benefits of this unusual circumstance.”

A circumstance in which Pittsburgh thrived. The Penguins overcame a sluggish start to finish on an 18-5-2 tear that vaulted them past Boston and Washington into first in the East.

It's a stretch in which they motored through injuries to forwards Evgeni Malkin, Kasperi Kapanen and Brandon Tanev. The arrival of two-time Stanley Cup winner Jeff Carter at the trade deadline last month helped.

So did excellent play in the net from Tristan Jarry and a top line of Crosby, Bryan Rust and Jake Guentzel that is among the best in the NHL.

Yet they hardly did it alone. They did it with a group of players who suddenly found themselves thrust into the middle of a taut playoff race for the first time. Players who at times made an immediate impact.

Players such as Zohorna, who scored on his first shot in the NHL in a victory over Buffalo on March 25. Players such as goaltender Maxime Lagace, who picked up his first win in more than three years when he shut out the Sabres in the regular-season finale last Saturday.

And while most of the newcomers have made it a point to credit Crosby's stewardship, the longtime captain turned it back on their arrival as part of the recipe that allowed the Penguins to extend their playoff streak to 15 straight years, the longest in North American major professional sports.

“Just the energy and the excitement guys have brought coming to our team, whether they came from other places, came from Wilkes,” Crosby said. “I think they came in and thrived on the opportunity ... I think that’s contagious.”

That energy is part of a plan that's made the Penguins younger and faster than they were during their past two trips to the postseason. The Islanders suffocated them in a four-game sweep in 2019. Last summer, Montreal stunned them in the qualifying round.

It led to a fair amount of offseason soul searching and an overhaul to both the coaching staff and the roster. Pittsburgh heads into the playoffs with momentum, pretty good health and a somewhat unspoken sense of urgency.

The core of Crosby, Malkin and defenseman Kris Letang has more years behind them in their respective careers than in front of them. They're well aware of it. It just doesn't come up in conversation during those idle hours in the hotel that doubled as some sort of hockey version of organic chemistry.

“It’s a new group and we’ve played some good hockey down the stretch,” Crosby said. "I think we need to bring that and another level.”