Chicago Auto Show to return in July after coronavirus hiatus 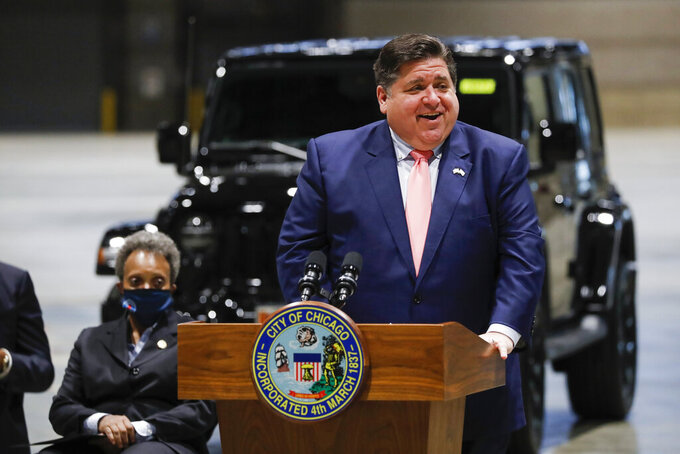 Governor J.B. Pritzker and Mayor Lori Lightfoot give an update on Chicago's reopening efforts at McCormick Place in Chicago on Tuesday, May 4, 2021. An announcement of auto show's return to McCormick Place was also made. (Jose M. Osorio /Chicago Tribune via AP)

CHICAGO (AP) — Standing in the massive convention center that was turned into a COVID-19 field hospital almost a year ago, Chicago's mayor and the Illinois governor on Tuesday announced that the facility will again host the famed Chicago Auto Show in July.

After weeks of announcements about allowing limited numbers of fans into sports stadiums, diners into restaurants and students into schools, the announcement was the strongest signal yet that Chicago has turned a corner in the battle against the deadly virus.

“I think everyone is really excited about this announcement because of what it represents,” a smiling Mayor Lori Lightfoot said during a news conference at McCormick Place.

“This is setting the stage for the return of big events in the months to come,” agreed Gov. J.B. Pritzker.

And while Lightfoot and Pritzker were careful not to make any promises, they both sounded confident that the auto show that has been held for more than a century would be one of many events to return this year.

“Our goal is to be fully open by July 4th,” the mayor said, adding that this summer in Chicago will more resemble the summer of 2019 than 2020, when the virus swept through the city and forced a national shutdown.

The auto show in February 2020 was one of the last events held in the city before the pandemic forced the closure of public venues. But many auto shows nationwide are coming back this year. The New York International Auto Show is scheduled to make a comeback from Aug. 20-29 at the Javits Convention Center, while the Los Angeles Auto Show is to return from Nov. 19-28 at the city’s convention center.

Detroit’s North American International Auto Show won’t happen this year, but it will be replaced by an outdoor event called Motor Bella from Sept. 21-26 at a racetrack called the M1 Concourse north of the city. Organizers hope to return to the downtown TCF Center convention hall in 2022.

Attendees will not be required to show proof that they have been vaccinated, but officials said they will be required to fill out a short questionnaire that includes a question asking whether they have.

Holding the auto show in July rather than in February, when it typically takes place, will also help attendees keep their distance from each other because this year, for the first time, there will be outdoor technology demonstrations and test tracks along nearby streets.