Chicago police encouraged by drop in homicides in May 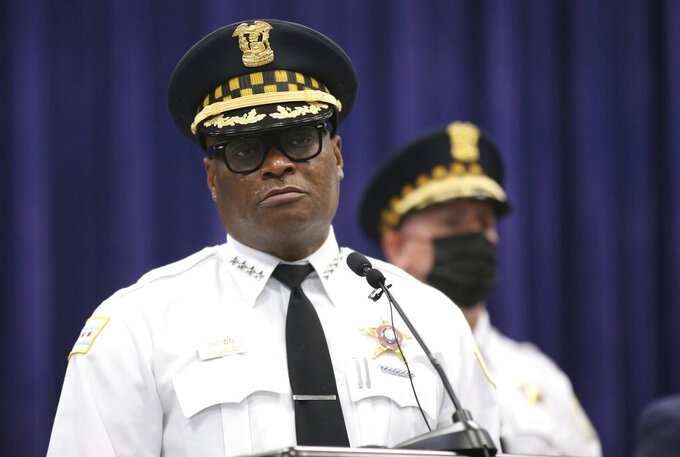 FILE - In this May 26, 2021, file photo, Chicago police Superintendent David Brown speaks during a news conference at police headquarters in Chicago. Police say the number of homicides dropped in May in Chicago compared with the same month last year. And police say the month that ended with 65 homicides compared with 84 in May 2020, culminated in a Memorial Day weekend with fewer homicides than any Memorial Day weekend in a decade. (Antonio Perez/Chicago Tribune via AP, File)

CHICAGO (AP) — Chicago saw a drop in the number of homicides in May compared with the same month last year and it ended with fewer killings than any Memorial Day weekend in a decade, the police superintendent said Tuesday.

And while there have been more homicides so far this year — 252 compared with 240 for the same five-month period last year — May ended with 65 homicides compared with 84 during the same month in 2020.

Police dispatched more officers to the street for the holiday weekend, when gun crime typically spikes, and the department reported 32 people were shot, including four fatally. Last year, 49 people were shot, 10 of whom died.

Superintendent David Brown said the holiday weekend's drop in homicides came after Mayor Lori Lightfoot announced a new strategy in which police, educators, library workers and others would be dispatched to 15 police beats on the West and South sides, where much of the city's violent crime occurs.

“That's a new approach ... that includes many departments out in the field during the hours where violence is peaking,” Brown said.

He also said that Violence Interrupters, a community group made up of former gang members and others, played a major role in reducing gun violence — something they couldn't do as effectively last year because the coronavirus pandemic prevented many of them from going out on the streets.

After 2020, when the number of homicides and shootings spiked dramatically from the previous year, it seemed earlier this year that 2021 was going to be even deadlier. But Brown said he was encouraged by the trend in the latest statistics released by the department.

“It's had a significant impact early on,” Brown said. “This approach is a great launch for the rest of the summer.”