Chiefs down several offensive pieces with Buffalo on deck 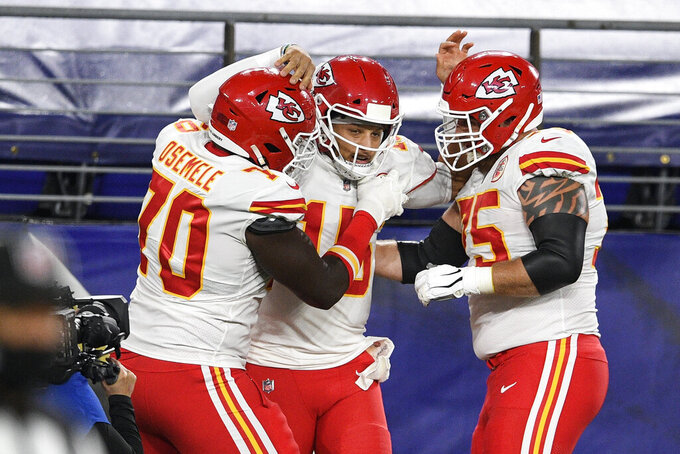 KANSAS CITY, Mo. (AP) — The Kansas City Chiefs will be without offensive lineman Kelechi Osemele and wide receiver Sammy Watkins when they visit the Buffalo Bills on Monday night for a game that was pushed back because of COVID-19 protocols.

Osmele tore tendons in both of his knees and Watkins hurt his hamstring during Sunday's loss to the Raiders, which also ended the Chiefs' franchise-record 13-game win streak. Mike Remmers finished the game at guard and will get the start in Buffalo, coach Andy Reid said Thursday, and Mecole Hardman will take most of the snaps in Watkins's place.

“I'm prepared,” Hardman said. “I did it last year when Tyreek (Hill) went down and Sammy went down one time, too. I'm prepared for the challenge. It's nothing I can't handle. I'm practicing hard, doing what I can do. Just see what Coach Reid has in store for me, what they want me to do, and just do it the best I can.”

Osemele is likely to have season-ending surgery, though it has not yet taken place. Watkins could miss more than one game, but Reid said that placing him on injured reserve is not an option that is being discussed.

Middle linebacker Anthony Hitchens also missed Thursday's practice with an illness, though it was not related to COVID-19, and fullback Anthony Sherman will be unavailable on Monday night after he landed on the COVID-19 list.

In other words, the Chiefs (4-1) will be down at least three starters when they try to get back on the winning track against the Bills (4-1), who also lost this past week to doubly foil what was nearly a showdown of unbeaten teams.

“We've been fortunate to win enough games that we haven't had to deal with it too much,” Reid said. “Learn from the things that took place Monday and let's make sure we correct those. That's what's real. And then get yourself ready to play a good Buffalo team and travel and so on. All our energy and time and so on should be focused on those things there. Learn from your mistakes and then jump in and exhaust yourself learning about Buffalo.”

The game was supposed to be played Thursday night, but it was moved as part of the NFL's massive schedule restructuring in the wake of COVID-19 testing. The Bills had their game against Tennessee pushed to this past Tuesday night, forcing the league to scrap any Thursday night game by moving their matchup with Kansas City to late afternoon Monday.

It will be the third time already this season that the Chiefs will play on Monday night. Their game against the Ravens was scheduled for primetime while their game the next week against the Patriots was moved back a day because of positive COVID-19 tests on New England quarterback Cam Newton and a Chiefs practice squad player.

“Hopefully people are able to watch it whenever they get off work,” Chiefs quarterback Patrick Mahomes said. “For me, it's like any other football game. We understood the challenges coming into this season, and to expect the unexpected. It's our third Monday night game in four weeks or whatever, but we're just excited to play a good football team.”

NOTES: Reid brushed aside questions about whether the Chiefs have any interest in RB LeVeon Bell, who was released by the Jets and is reportedly considering Kansas City. “(General manager Brett) Veach does all that,” Reid said. “I tell him, ‘If something happens, let me know,’ and that's how we roll.” ... Mahomes has been a major proponent of voting during the run-up to the November election, but he was surprised recently when his voter registration was rejected. “I was registering with my house in Texas and I'm really close to a county line,” he explained. “I knew I put the right county on it, but it got sent to a different county and then got canceled. So when I went to get my absentee stuff, I wasn't able to register. But I was able to do it again. I stayed on top of it, and got registered, and now I plan to use my voice and do that.”