Chiefs humming along at 8-1 at midway point of season 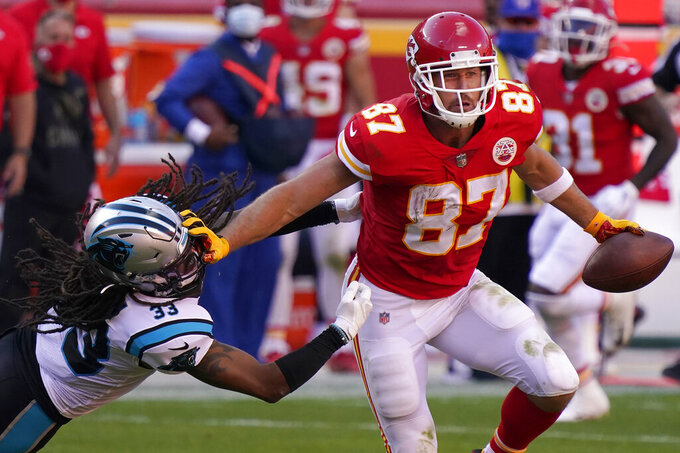 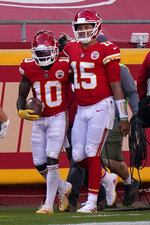 KANSAS CITY, Mo. (AP) — The Kansas City Chiefs are exactly where they anticipated being at the midway point of the season.

First in the AFC West. Their offense humming. Their defense playing well.

The only blip through eight games came against the Las Vegas Raiders, when they played their worst game of the season and had their 13-game win streak snapped. The defeat left the Chiefs (8-1) chasing the unbeaten Pittsburgh Steelers for the sole first-round bye in the AFC, and their schedule down the stretch isn't exactly easy.

Still, the Chiefs are spending their bye this week feeling quite good about themselves.

“We have so much fun in this offense, this team and this building,” said Chiefs tight end Travis Kelce, who had a big game in a 33-31 victory over the Carolina Panthers on Sunday. “We have a lot of character guys that love what they do. You know you are in for a few good laughs, but at the same time, this matters to a lot of people, so we take care of business.”

That means not necessarily enjoying the week off too much.

The Chiefs understand the complexities of the season caused by the COVID-19 pandemic, and that letting their guard down could lead to positive tests and a lot of trouble when they return. That's why quarterback Patrick Mahomes and the rest of the Chiefs are laying low in anticipation of the back half of the schedule.

Especially with a revenge game against the Raiders coming off the bye.

“I'll probably take a day off, then work out the next few days, then watch The Masters on the weekend,” Mahomes said with a grin. “We have a big one coming up after the bye week, so we'll be ready for that one.”

“We have full confidence he'll do what he needs to do to win. That's how he operates,” Chiefs coach Andy Reid said, "whether that's showing up and working his tail off to make sure he knows the opponent to what you see on game day.”

As good as Mahomes has been the past two weeks, a big reason for the gaudy numbers has been the Chiefs' offensive imbalance. They had 47 passes against 20 runs versus the Jets and 45 passes and 12 runs against the Panthers.

“We played two good run teams in a row. Both of these teams are pretty solid up front,” Reid said, “so we felt like the pass game, we could execute that even better than the run game.”

Kelce and Hill have become the go-to targets with Sammy Watkins sidelined by a hamstring injury. They combined for 30 targets against the Panthers, with Kelce catching 10 balls for 159 yards and Hill grabbing nine for 113 and two touchdowns.

Dave Toub has rightfully earned a reputation as one of the best special teams coaches in the game, but he has a few things to iron out during the bye. The Chiefs were caught napping on a faked punt Sunday that allowed the Panthers to eventually score a touchdown, and Harrison Butker missed an extra point for the third time in four games, along with a field goal.

DT Taco Charlton broke his leg against the Panthers and will likely miss the remainder of the season. But there's a good chance Watkins will return after the bye and that right tackle Mitchell Schwartz (back) will be ready soon, too.

101— Mahomes broke Dan Marino's record for the fastest quarterback in NFL history to eclipse 100 touchdown passes when he reached the milestone in 40 games — four fewer than the Hall of Famer. Along the way, Mahomes has thrown for at least four TD passes in a franchise-record 11 games.

The Chiefs return from their bye for a prime-time matchup in Las Vegas (5-3) on Nov. 22, the first of five straight against teams with winning records. Those five opponents — the Raiders, Buccaneers, Browns, Dolphins and Saints — are a combined 27-11 at the midway point of the season.