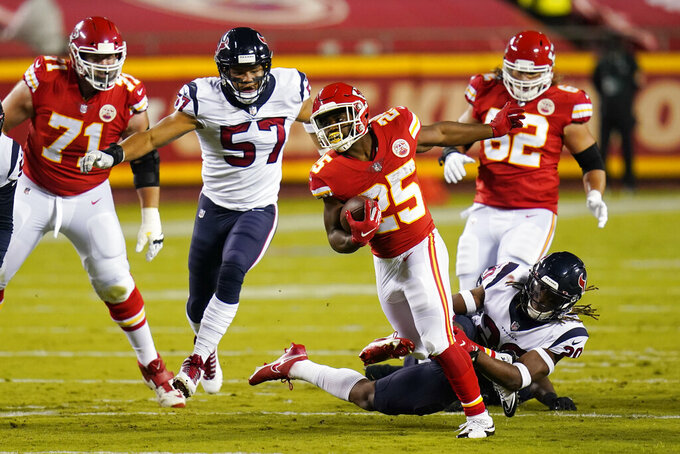 Kansas City Chiefs running back Clyde Edwards-Helaire (25) carries the ball against the Houston Texans in the first half of an NFL football game Thursday, Sept. 10, 2020, in Kansas City, Mo. (AP Photo/Jeff Roberson)

KANSAS CITY, Mo. (AP) — The first player to opt out of the NFL season due to the coronavirus pandemic this was season was Chiefs guard Laurent Duvernay-Tardif, though the Super Bowl champions figured they could absorb that blow relatively easily.

After all, they had used a third-round draft pick on TCU's Lucas Niang to provide depth in just such a circumstance.

Then, Niang decided to opt out.

Along with a knee injury to versatile Martinas Rankin that has hung around into the season, the Chiefs suddenly found themselves with unexpected holes along the offensive line. And while the big guys up front tend to be an afterthought to most fans — and rarely make for sexy copy for reporters — the reality is the five guys who are tasked with creating creases in the running game and protecting Patrick Mahomes have one of the most crucial and difficult jobs on the team.

Mahomes doesn't make those no-look throws without them. Rookie running back Clyde Edwards-Helaire doesn't run for 138 yards and a score in a win over Houston without them. Tyreek Hill, Sammy Watkins, Travis Kelce and the rest of the Chiefs' vast array of weapons don't have time to get open downfield without them.

“That's just the life on the offensive line,” said Eric Fisher, who has developed from a near-bust as the No. 1 overall pick in the 2013 draft into one of the premier left tackles in the game. “What we do in the trenches isn't easy.”

Yet the Chiefs did it quite well in their season-opening 34-20 victory over the Texans.

It helps that despite the personnel changes, the Chiefs still have one of the most experienced offensive lines in the entire league. Fisher is in his eighth season as a starter while bookend right tackle Mitchell Schwartz, one of the vastly underrated players in the league, has started every regular-season game since the beginning of of 2012.

Andrew Wylie returned to the starting lineup, where he had been for 27 games over the past two seasons, and did a solid job at right guard. Two-time Pro Bowl left guard Kelechi Osemele, who was signed late in camp after a bizarre ending to his tenure with the Jets, showcased a much-needed mean streak in taking over the left guard job.

At center, Austin Reiter continued to show his mastery of the offensive line protections while displaying the close rapport he has developed with Mahomes, who was sacked just once by the Texans' fearsome defensive line.

“Obviously without the preseason games, it’s hard to get out there and kind of form that bond that offensive lines normally do,” Mahomes said, "and how they can kind of think like each other and pass off stuff. And I think they did a great job of not only pass protecting me with all the games and that defensive line, which is a very good defensive line, but within the run game of making their blocks and setting their angles so Clyde can go out there and make plays happen.

"I thought it was a really good sign for them to be as one unit so early in the season with the offseason that we did have.”

The Chiefs, who visit the Chargers in their glittering new stadium near Los Angeles on Sunday, wound up with the third-most rush yards in the league in Week 1. Their point total was No. 4. The balance they showed in their offense was such that the Texans never knew whether to pack the line of scrimmage or slough off in downfield coverage.

Mahomes, Edwards-Helaire and the skill position guys got most of the credit in the ensuing days. The guys along the offensive line deserved just as much.

“We liked the mix we were able to get going," Reid said. “We threw the ball well and caught the ball well, and then also ran it well. So you give the offensive line credit for that against what I consider one of the best defensive fronts in the league.”

Notes: DE Alex Okafor (hamstring strain), DT Khalen Saunders (dislocated elbow) and CB Charvarius Ward (broken hand) did not practice Wednesday. ... Reid joked that his mask “wasn't all that successful” against Houston when the plastic face shield fogged up on a chilly, rainy night. But he vowed that he has it “under control” for this week in Los Angeles. ___