Chiefs open in draft after keeping most of their free agents 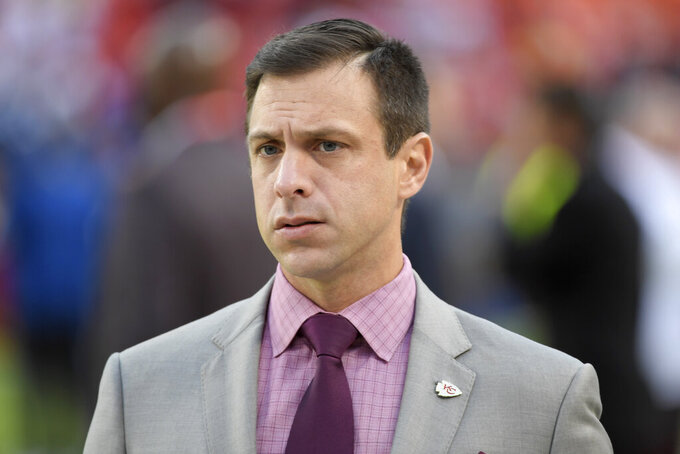 FIL - In this Oct. 6, 2019, file photo, Kansas City Chiefs general manager Brett Veach follows warmups before an NFL football game against the Indianapolis Colts in Kansas City, Mo. Veach was instrumental in the drafting of quarterback Patrick Mahomes, he overhauled the entire defense in one offseason, and he helped to give coach Andy Reid the pieces to reach the big game in Miami on Sunday. (AP Photo/Reed Hoffmann, File)

KANSAS CITY, Mo. (AP) — The Kansas City Chiefs have adopted the mantra of “run it back” in recent weeks, which means re-signing just about every important player from their first Super Bowl championship team in five decades in the hopes of winning it all again.

All of which puts the Chiefs in the most enviable of situations: They already have a proven, championship-caliber roster with no significant holes, allowing them the flexibility to do just about anything they want in the NFL draft.

They could trade the No. 32 overall pick to a team that wants the fifth-year option afforded a first-round pick, potentially adding selections later in the draft.

They could add depth in the defensive backfield, which remains thin, or begin to address positions that could become problems next year: linebacker, running back and defensive tackle.

That also means general manager Brett Veach has to cast a wider net when it comes to scouting players, and that has been made exceedingly difficult by the fact that the coronavirus has effectively shut down travel and in-person evaluations.

“He's working like crazy, using all the virtual equipment he can and watching tape," Chiefs coach Andy Reid said. “Tape isn't near as clear as it is in the office, but you power through it and you do what you have to do to make sure you get it done."

The Chiefs have not had a first-round pick since 2017, when they traded up to take quarterback Patrick Mahomes at No. 10 overall. Veach took over as GM shortly after the draft, so this could be his first chance to make a selection on Day 1.

If that happens, look for the Chiefs to target the defensive backfield. They brought back Breeland and signed free agent Antonio Hamilton, but they also lost Kendall Fuller and Morris Claiborne and could use some depth. Noah Igbinoghene from Auburn and Jeff Gladney of TCU are two options that could be available at the end of the first round.

The Chiefs also could benefit from the fact that few other teams need a running back, meaning elite talents such as Georgia's D'Andre Swift and Wisconsin's Jonathan Taylor could be there for the taking on that Thursday night.

Regardless whether the Chiefs pick in the first round, their four remaining selections will be crucial. They are about to give Mahomes a potentially record-setting contract, and they have a lot of money invested in Clark, Watkins and safety Tyrann Mathieu. They must add starting-caliber players on rookie contracts to keep their salary cap in check.

If the Chiefs did not pick a defensive back in Round 1, the second and third rounds could be the time to grab a player such as Virginia cornerback Bryce Hall. The Chiefs could also target depth at wide receiver and on the offensive line.

The Chiefs value surrounding Mahomes with talent, which is why they are constantly seeking playmakers at the skill positions. But their defense, which was vastly improved under first-year Chiefs coordinator Steve Spagnuolo, will have to replace tackle Xavier Williams, linebacker Reggie Ragland and defensive end Emmanuel Ogbah.

They also lost safety Jordan Lucas, but they hope Juan Thornhill will be recovered from a torn ACL to replace him.

The Chiefs found a role player in cornerback Rashad Fenton in the sixth round a year ago, but otherwise, picks after the third round the past three seasons have been underwhelming. With only five selections during the three-day draft, Veach and his scouting department are under pressure to deliver in the fourth and fifth rounds.