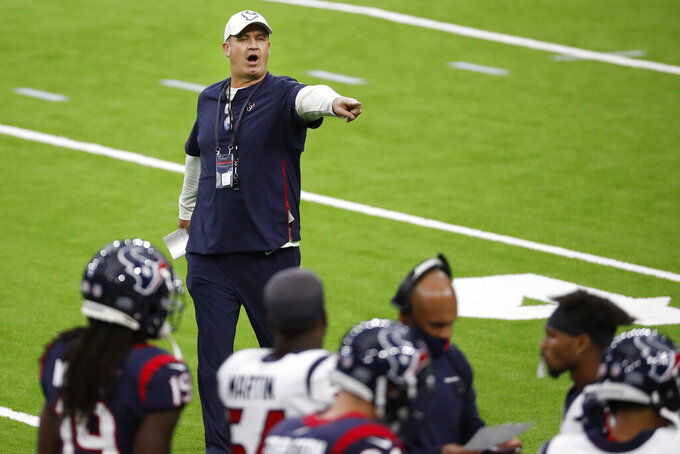 KANSAS CITY, Mo. (AP) — Perhaps never before has the final full practice before an NFL game been more important than this season.

With the coronavirus pandemic wiping out the offseason and eliminating all four preseason games, the Chiefs and Texans found themselves going through a final workout Tuesday with plenty of things to iron out — from the basics such as pregame stretch and warm-ups to the last-minute tweaks to formations, play calls and the game plan.

After all, the defending Super Bowl champion Chiefs and the Texans, whom they beat in the divisional round of the playoffs, know that all eyes will be on them as they kick off the season with a Thursday night showdown at Arrowhead Stadium.

Fair enough. But not every year does a global pandemic fundamentally alter the way the world operates. That includes the professional football, where COVID-19 testing, face masks and hand-washing have become integral parts of the daily routine.

“I'm curious to see how the teams play,” Reid admitted. “I think it's going to be a well-played game, but I'll be curious.”

Chiefs defensive coordinator Steve Spagnuolo also acknowledged a bit more trepidation than usual. Part of it is that, even though the Texans have played the Chiefs plenty in recent years, there has been significant turnover among their offensive personnel — DeAndre Hopkins is out, for example, and fellow wide receivers Brandin Cooks and Randall Cobb are in.

“You can get a little bit off of the preseason games. You get a little bit of feel for how the opponents are going to interact with each other,” Spagnuolo said. “If we would have had our four normal preseason games then we would’ve seen 25 to 30 snaps of their first group. We kind of missed that so it’s a little bit of a guessing game. Again, that’s going to be part of the chess match going on during the game. The team that makes the adjustments best will have the best chance of winning.”

“The first game really is like this all the time,” Spagnuolo said. "It’s really more about us and how we function than it is about trying to get tips on what they may do. We’re going to kind of focus on that.”

The biggest area of concern for both Reid and Spagnuolo: tackling.

Teams are always wary of the injury risk that comes with tackling in practice. So even during the handful of padded workouts they are allotted in camp, they often prohibit taking players all the way to the ground. But without preseason games to work on such fundamentals, the Chiefs had to tweak the way they approached tackling.

“Tackling at this level is tough on its own. A lot of these guys can make multiple people miss,” Chiefs safety Tyrann Mathieu said. “I think if you have the ability to play fast, play to your leverage, and use your teammates, I think all tackles aren’t necessarily meant for you to make. Sometimes it’s for you to use your help, two guys can bring down one guy. As long as we can play fast and play to our leverage and use our teammates, I’m hoping we’ll be fine.”

Yes, there sure seems to be a lot of hope as Week 1 approaches.

One thing the Chiefs do have going for them is stability within their roster. They brought back most of their own free agents, and along with returning veterans, they have served as helpful ad-hoc coaches to the rookies and newcomers. That has been a boon not only in helping them absorb the playbook but also acclimate to the locker room culture.

“We're in game week now and everybody is ready to go,” Chiefs quarterback Patrick Mahomes said. “You can feel the intensity. You can feel that mentality. I think everyone's at the point now where we're just ready to play football again.”