As China absorbs Hong Kong, why do both get Olympic teams? 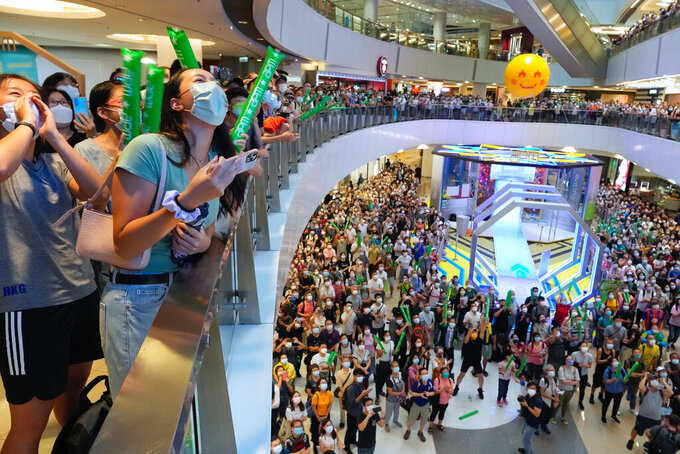 People react as they watch Siobhan Bernadette Haughey of Hong Kong swim in the women's 100-meter freestyle final at the 2020 Summer Olympics, at a shopping mall in Hong Kong, Friday, July 30, 2021. Haughey, born in Hong Kong four months after the 1997 handover, now has two silver medals from Tokyo, becoming the city’s first-ever multiple medalist. Hong Kong’s haul of treasure from Tokyo, with a gold also won in men’s fencing, outshines the one gold, one silver and one bronze that Hong Kong accumulated through all of its previous Olympic appearances since its 1952 debut at the Helsinki Games. (AP Photo/Vincent Yu)

TOKYO (AP) — Two teams, from two Chinese cities, confronting each other on a badminton court, thwacking the shuttlecock back and forth.

Nothing unusual there. In China, teams play each other all the time. For the mixed doubles pairing from Beijing that emerged victorious, the match this week had the banality of any other domestic competition.

“Because we know each other so well,” said the woman on the winning team, Huang Yaqiong. “There’s nothing different.”

Except this was an Olympic semifinal at the Tokyo Games. And for China, the rare privilege of being able to field two distinct teams — one from the Chinese mainland, in bright communist red, the other from its city of Hong Kong, in a royal blue — was essentially giving it two bites at the Olympic cherry. That's two routes to securing another of those shiny Olympic gold medals that China's communist leaders so crave as proof they are doing a sterling job.

China's double-teaming of the Olympics — the equivalent, say, of the United States fielding both a national team and another of athletes solely from New York — has never been much of an issue at the Olympics and isn't becoming one so far in Tokyo.

But two things are happening that could weigh on the equation.

First, Hong Kong is winning, like never before. Tokyo is the most successful games ever for the city of 7.5 million people on the south China coast. A gold medal in the men's foil event for fencer Cheung Ka Long was Hong Kong's first since the one-time British colony was reabsorbed by China in 1997. Cheung was born just 20 days before that momentous change in the city's trajectory.

When windsurfer Lee Lai Shan won Hong Kong's first and only previous gold, at the Atlanta Games in 1996, "God Save the Queen" played at the medal ceremony. In Tokyo, for Cheung, it was China's anthem, “March of the Volunteers."

Swimmer Siobhan Haughey, born in Hong Kong four months after the 1997 handover, also has two silver medals from Tokyo, becoming the city's first multiple medalist. Their combined haul of treasure outshines the one gold, one silver and one bronze that Hong Kong had accumulated through all of its previous appearances since its Olympic debut in 1952.

But such success also begs a question: Is it fair that China — with one team labeled China and the other Hong Kong, China — is getting multiple pathways to Olympic podiums? Should Hong Kong athletes instead be folded into China's national team — as, for example, athletes from Scotland, Wales and some from Northern Ireland are in Team Great Britain with the English?

One could even argue that China is extra-privileged by having three teams at the Games, if one accepts Beijing's position that the island of Taiwan is also part of its territory. To avoid a battle with Beijing, Taiwan is made to compete at the Olympics as “Chinese Taipei." That's the name of the capital of the island off China’s east coast which has governed itself since 1949, when it became the refuge for China’s Nationalist government that fled the communist takeover of the mainland.

Naturally, Hong Kong athletes shudder at any suggestion of losing their team.

“Hong Kong really has its own special characteristics. We have always had our own training system,” said Tse Ying Suet, the female member of the “Hong Kong, China” pairing that lost to China proper in the badminton mixed doubles semis.

“It’s a matter of pride for Hong Kong that from such a small place, you can get a fencing gold medal and a swimming silver medal. It’s such fun that a place so small can perform so well.”

The other change in any re-evaluation of whether Hong Kong still warrants its own team is how China has been treating the territory of late. In short, not kindly.

An ongoing crackdown in Hong Kong on pro-democracy voices has followed in the wake of often violent anti-government and anti-China protests that convulsed the city for months in 2019.

On the same day that Haughey booked her first ticket to a Tokyo final, in the 200-meter freestyle, a court in Hong Kong found the first person guilty of secessionism and terrorism under a sweeping new national security law.

The erosion of Hong Kong's freedoms feeds in multiple ways into the question of its Olympic team.

On the one hand, every arrest, every newspaper closure, and every other blow to the liberties that set Hong Kong apart from China's other cities would seem to undermine the justification for its separate status at the Games. Beijing and Shanghai don't get Olympic teams, so the more it resembles them, why should Hong Kong?

But on the other hand, to strip Hong Kong of its team when its uniqueness is already under attack would be another morale-bashing blow to its identity.

“Hongkongers want to be represented independently at sporting events, as it helps grow their community and the sense of belonging,” says Nathan Law, a Hong Kong opposition leader based in Britain. "As Hong Kong enjoys a distinct culture and community, they should continue to be represented by their own team.”

Crowds have also sent that message by gathering in Hong Kong shopping malls to cheer on their medal winners. Malls were places of protest in 2019.

Videos on social media showed a mall crowd chanting “We are Hong Kong” as a giant screen broadcast the Tokyo medal ceremony for Cheung, largely drowning out China's anthem.

Kim-Wah Chung, deputy CEO of the Hong Kong Public Opinion Research Institute, says the city's Olympic team has become "a symbol of resistance" for people who are angry and frustrated at Beijing. Rooting for Hong Kong athletes and also cheering when mainland Chinese athletes lose is “an expression of the growing antagonism," he said.

Chung added that he would not be surprised if Beijing seeks to disband Hong Kong's team in the future and incorporate its athletes into one China team, to knock away another aspect of the city's uniqueness.

“Beijing," he said, “thinks that it can do anything.”

Although Hong Kong is unusual in the Olympic movement, it is not alone in being both separate but not entirely so.

Should athletes from the Pacific Island of Guam or the U.S. Virgin Islands in the Caribbean triumph in Tokyo, the anthem their Olympic champions would hear would be the U.S. one, "The Star Spangled Banner." As U.S. territories, they compete under their own flags at the Games, like Hong Kong. American Samoa and Puerto Rico also have their own teams.

“Hong Kong and the other colonies appear to have been allowed to continue as beneficiaries of a sort of grandfather clause, although I have never seen a document explaining the situation," said the author of "The Complete Book of the Olympics."

For the moment, then, Hong Kong's Olympic future seems solid. But for how long?

“There has been no discussion of Hong Kong's status as far as I am aware," International Olympic Committee spokesman Mark Adams said Friday. “I see no reason why it won’t continue.”

AP Sports Writer Graham Dunbar contributed. Paris-based AP multimedia journalist John Leicester is covering his eighth Olympics. He covered Hong Kong's handover to China in 1997 and its protests in 2019, and was based in China for AP from 1996-2002. Follow him on Twitter at https://twitter.com/johnleicester