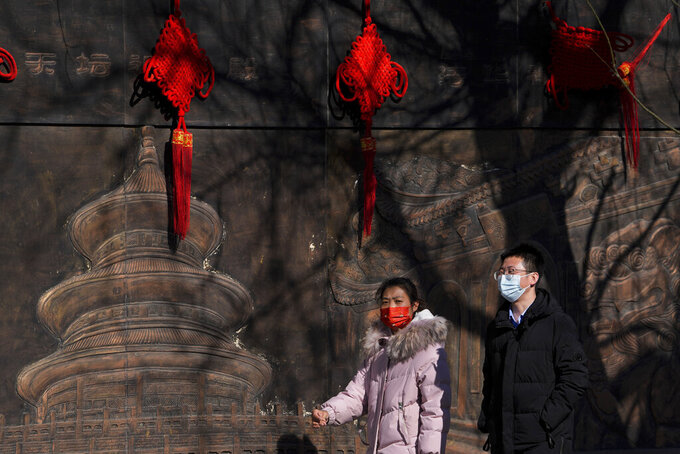 Residents wearing face masks to help protect from the coronavirus walk by a mural decorated with Lunar New Year decorations in Beijing, Tuesday, Feb. 8, 2022. China has ordered inhabitants of the southern city of Baise to stay home and suspended transportation links amid a surge in COVID-19 cases at least partly linked to the omicron variant. (AP Photo/Andy Wong)

BEIJING (AP) — China has ordered inhabitants of the southern city of Baise to stay home and suspended transportation links amid a surge in COVID-19 cases at least partly linked to the omicron variant.

Classes have been suspended, non-essential businesses closed and mass testing of residents ordered. Restaurants are only permitted to serve take-out. Traffic lights have been switched to red only to remind drivers to stay home.

As of Tuesday, 135 cases had been reported in the city — at least two of them found to be omicron, health authorities said.

The city has become the latest to be placed under lockdown in keeping with China’s “zero-tolerance” approach to the pandemic. The policy requires strict measures be applied even when only a small number of cases have been found.

A major concern is preventing outbreaks during the ongoing Beijing Winter Olympic Games. No new cases were reported in the Chinese capital on Tuesday.

More than 30 athletes at the Beijing Olympics are in isolation facilities after testing positive for the coronavirus, organizers said Tuesday. The average stay in isolation is seven days.

Baise has an urban population of about 1.4 million, with another 3 million in the large surrounding rural area that abuts the Vietnamese border.

State media reported customs clearance at the crossing points of Longbang and Pingmeng were delayed, causing further disruptions to cross-border trade that have already inflicted major losses on Vietnamese fruit farmers who rely on the Chinese market for much of their revenue.

The first cases in Baise were reported Saturday at the tail end of the Lunar New Year holiday, when many Chinese travel vast distances to their hometowns. For the third year running, the government asked people to remain in place to avoid a major spread, although such calls had only a slight effect on the numbers of trips taken.

Despite the occasional regional outbreak, China has largely brought the pandemic under control through lockdowns, mass testing, case tracing, mask mandates and other strict measures. Almost 85% of the population is fully vaccinated, according to Our World in Data, although questions have been raised about the efficacy of Chinese vaccines, particularly against the omicron strain.

Chinese health authorities say the continuing emergence of outbreaks despite the high vaccination rate justifies the continued implementation of “zero-tolerance" policies and the quarantining of travelers arriving from abroad.

At the same time, lockdowns imposed in December and January on millions of residents of northern and central cities have been lifted.