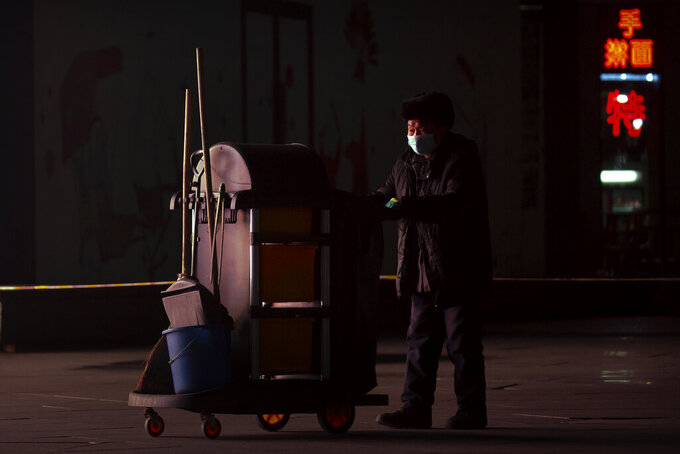 A maintenance worker wearing a face mask to protect against the spread of the coronavirus walks outside of an office complex in Beijing, Wednesday, Jan. 13, 2021. China is concentrating its pandemic prevention efforts in the rural areas as officials urge people to not travel home for the annual Lunar New Year festival, as the country combats its most serious latest outbreak of COVID-19 since the pandemic originally broke out in Wuhan a year ago. (AP Photo/Mark Schiefelbein)

BEIJING (AP) — China is concentrating its pandemic prevention efforts in the rural areas as officials urge people to not travel home for the Lunar New Year festival while the country combats its most serious latest outbreak of COVID-19.

Authorities said Wednesday local clinics and hospitals in villages need to strengthen their vigilance for any new COVID-19 cases, and local governments must take responsibility at every level — from county to town to village.

The government is bracing for the world's largest annual migration in which hundreds of millions travel home for Lunar New Year break in February, many of them workers from cities going back to their home villages.

“In the period leading up to Lunar New Year, we urge the public that those who do not need to travel, should not travel, and if one must travel, please observe all travel information and try to stagger travel to off-peak times,” Wang Bin, an official with the National Health Commission, told a news conference. “And to do personal protective measures and avoid crowded places with lots of people.”

Meanwhile, millions of people are lining up in freezing temperatures to receive a second round of coronavirus tests in a city south of Beijing that is at the heart of the latest outbreak.

The health commission on Wednesday announced another 90 confirmed cases in Hebei province, whose capital Shijiazhuang has accounted for the vast majority of the recent surge. Another 16 cases were reported in the northeastern province of Heilongjiang and one in the northern province of Shanxi.

China had largely contained domestic spread but frigid winter temperatures have brought new outbreaks, even as China pushes to vaccinate 50 million people by mid-February. The Hebei outbreak is of particular concern because of the province’s close proximity to Beijing. Travel to and from three cities — Shijiazhuang, Xingtai and Langfang — has been suspended and residents of some communities have been told to stay home for the next week.

All of Shijiazhuang’s roughly 10 million people have been ordered to undergo a second round of testing as authorities seek to isolate the sources of infection, some of which have been tentatively linked to wedding gatherings.

Similar measures have been ordered around the country, particularly in Wuhan where 11 million people were placed under lockdown for 76 days last winter during the early days of the pandemic.

The increased numbers come as World Health Organization experts prepare to fly on Thursday to Wuhan at the start of their investigation into the origins of the pandemic. Chinese officials said they would cooperate “closely” with the WHO in the investigation following rare criticism of the WHO head that Beijing was dragging its feet in issuing the necessary permissions.

China has strictly controlled all research into the origins of the coronavirus and have used state media to promote theories that the virus may have actually been brought to China from outside.

On Dec. 15, China started a mass vaccination campaign for select groups. Health workers have given over 10 million doses of one of the domestically produced COVID-19 vaccines, officials said Wednesday. Currently, China has only approved one vaccine for general use in populations aged 18-59 — an inactivated virus shot from state-owned Sinopharm.

It has also approved three vaccines for emergency use, including two from Sinopharm and one from Sinovac, a private company.

Sinovac's CEO announced at the same news conference that they have supplied more than 7 million shots to provinces across the country. Its vaccine has not yet been sent to regulators for final market approval.