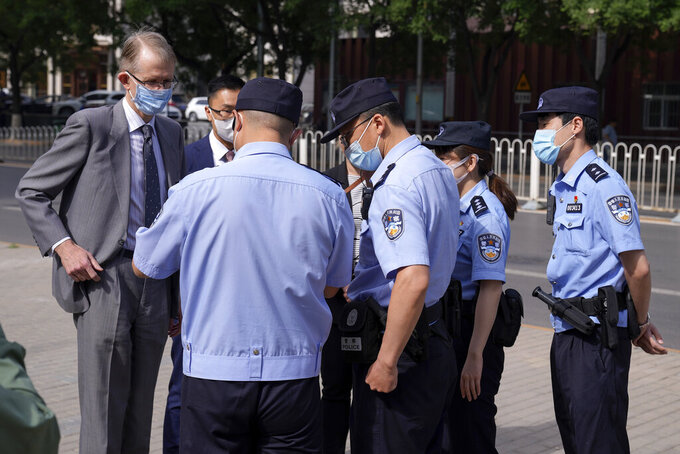 Australian ambassador to China Graham Fletcher, left, is checked by policemen outside the No. 2 Intermediate People's Court as he arrives to attend the espionage charges case for Yang Hengjun, in Beijing, Thursday, May 27, 2021. Fletcher said it was “regrettable” that the embassy was denied access Thursday as a trial was due to start for Yang, a Chinese Australian man charged with espionage. (AP Photo/Andy Wong)

BEIJING (AP) — China on Thursday put a Chinese Australian writer on trial for alleged espionage and denied the Australian ambassador in Beijing access to the hearing.

Yang Hengjun has been held since arriving in China in January 2019 and has had no access to family and only limited contact with his lawyer, the Australian government has said.

Ambassador Graham Fletcher walked to the court complex gate in Beijing and returned after he was denied entry, telling journalists it was “regrettable” that diplomats were prevented from observing the trial.

His government had been told earlier that a representative would not be allowed to attend the trial because it is a national security case. Fletcher said China has only said that the charge against Yang involves espionage.

“This is deeply regrettable and concerning and unsatisfactory,” Fletcher said. “We’ve had longstanding concerns about this case, including lack of transparency, and therefore have concluded that it's an arbitrary detention.”

Authorities have not released any details of the charges against Yang, a novelist who reportedly formerly worked for China's Ministry of State Security as an intelligence agent.

Yang’s lawyer, Mo Shaoping, said the hearing concluded shortly before 5 p.m., with a verdict to be issued at a later date, but declined further comment, saying “the case involves state secrets."

Yang has denied the accusation against him, and while a conviction is virtually certain, it isn't clear when the verdict will be handed down. The espionage charge carries penalties ranging from three years in prison to the death penalty.

In comments believed to have been dictated to diplomats in March and reproduced in Australian media, Yang said the lack of fresh air and sunshine had taken a toll on his health but that spiritually, “I’m still strong.”

“There is nothing more liberating than having one’s worst fears realized,” Yang said.

Fletcher said Australian diplomats last met with Fletcher via video link last month and were able to convey messages to and from his family. Yang appeared to be in satisfactory health, Fletcher said.

Australia will continue to “advocate strongly" for Yang and did not see a link between his case and the overall state of ties with China, Fletcher said.

“China is firmly opposed to the Australian side’s unwarranted disruption in China’s law-based handling of the case and its gross interference with China’s judicial sovereignty. We have made serious complaints with the Australian side,” Zhao said at a daily briefing.

The trial comes at a time of deteriorating relations between the two countries, brought on by Chinese retaliation against Australian legislation against foreign involvement in its domestic politics, the exclusion of telecommunications giant Huawei from its 5G phone network, and calls for an independent investigation into the origins of the COVID-19 outbreak that was first detected in China in late 2019.

Beijing has essentially suspended all but the most routine contacts between the sides, while state media and the Foreign Ministry routinely attack Australia as adopting anti-Chinese policies at the behest of the United States, China's main geopolitical rival.

Australian journalists Michael Smith of the Australian Financial Review and Bill Birtles of the Australian Broadcasting Corp. fled China in September after sheltering in Australian diplomatic compounds following demands for questioning by Chinese authorities. They were allowed to depart China under a deal brokered between the two governments, leaving Australian media without a physical presence in the country.

Before their departure, Chinese police questioned both journalists about Australian citizen Cheng Lei, a business news anchor for CGNT, China’s English-language state media channel, who had been detained a month earlier.

Amnesty International’s China head, Joshua Rosenzweig, said the allegations against Yang were based on criticism of the Chinese government in articles he published.

“Having reportedly endured hundreds of interrogations and been held in inhumane conditions with severely restricted access to his lawyer, Yang now faces an unfair trial behind closed doors. He remains at grave risk of torture and other ill-treatment,” Rosenzweig said in an emailed statement.