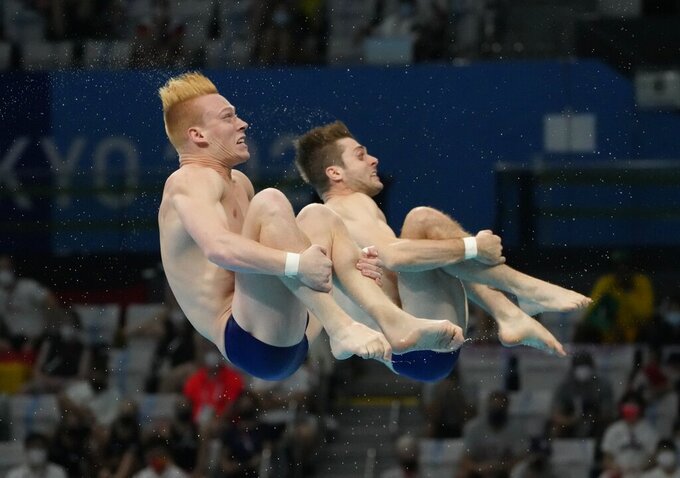 TOKYO (AP) — Even with a mistake that led to their lowest scoring dive, Wang Zongyuan and Xie Siyi couldn't be caught.

The Chinese led all the way in winning men’s the 3-meter synchronized springboard on Wednesday, giving the diving powerhouse its third gold medal of the Tokyo Olympics.

Wang and Xie finished with 467.82 points in their Olympic debuts. They hugged each other and their coaches, and shed tears in celebration.

“We were really feeling relieved,” Wang said through a translator. “Three hours ago, I was an unknown athlete. Now I can say I'm winner of the Olympics.”

Xie said of his partner: “He's willing to learn and he's a fast learner.”

Wang and Xie gave China a gold medal in the only event it didn't win five years ago in Rio de Janeiro. The Chinese earned seven golds at the 2016 Games.

The U.S. earned its second diving medal in Tokyo.

Wang and Xie missed on their next-to-last dive, a back 3 1/2 somersaults tuck that earned them 77.76 points. That left them 13 points ahead of the Americans.

“It’s diving. Anything can happen,” Hixon said. “You’ve just got to wait and see.”

The Chinese and the Americans did the same dive in the last round. The forward 4 1/2 somersaults tuck carries a 3.8 degree of difficulty, the second-toughest dive performed by any of the teams. Wang and Xie earned 99.18 points, while Capobianco and Hixon received 88.92.

“They were incredible the whole day,” Hixon said of the Chinese.

Hixon kissed the tower when it was over.

Capobianco and Hixon took turns hanging their medals around each other's necks on the podium. The coronavirus pandemic has forced many changes at the Games.

“There's always silver linings around COVID,” Hixon said. "Maybe that’s one of them.”

The Americans kept up their synchronicity during the medals ceremony, turning left and right together before receiving their prizes on a tray.

“Just to make sure we looked good,” Hixon said.

Similar to the Chinese partnership, first-time Olympian Capobianco looks up to the veteran Hixon.

“It was just great to have the best diver in the country in your pool every day,” Capobianco said. "To have him to look up to and learn from, he’s taught me so much about competing and being a world-class diver.”

Patrick Hausding and Lars Rudiger of Germany rallied from sixth to take bronze with 404.73 points. It was Hausding’s third Olympic medal — most by a German diver — after winning silver in 10-meter synchro in 2008 and bronze in individual springboard in 2016.

Evgenii Kuznetsov and Nikita Shleikher of the ROC were in medal contention when they failed on their last dive. Shleikher appeared to lose his way as he took off and hit the water on his stomach. As a result, they received zero points and finished last among eight teams.