Chinese hockey team loses another game in test for Olympics 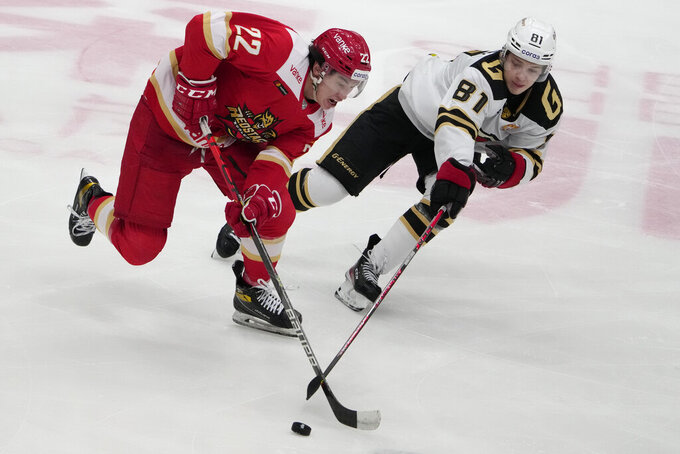 MYTISHCHI, Russia (AP) — The players hoping to make China’s men’s hockey team for next year’s Beijing Olympics lost a second trial game against a Russian club on Wednesday as uncertainty builds over whether they will be allowed to play at the Winter Games.

International Ice Hockey Federation officials observed Kunlun Red Star’s 4-1 loss to Avangard Omsk in the Kontinental Hockey League. The Chinese team’s 5-4 overtime loss to Amur Khabarovsk in another KHL game two days earlier was also used to assess the competitive strength of the team. Kunlun has a 7-22 record in the Russia-based league.

“Definitely not second to a Norway or a Denmark or Latvia. We’re equal to those countries,” Zanatta said. “Today and the last game they proved they have the character and the ability and they have the right to participate in their own Olympics.”

Denmark and Latvia qualified for Beijing. Norway is the highest-ranked unqualified team — and a possible replacement if China doesn't play.

China is using Kunlun as a proxy for the national team. Most of the roster consists of North American-born players who league records list as having taken Chinese nationality. More players could be naturalized in time for the Olympics.

Avangard had 35 shots on goal while Kunlun had 14, but the score was only 2-1 with four minutes remaining. Former Detroit Red Wings defenseman Jake Chelios — son of NHL great Chris Chelios — scored Kunlun’s only goal.

China has never previously competed in a men’s Olympic hockey tournament. It most recently played in the fourth-highest division of the IIHF world championships in 2019, before it naturalized foreign-born players.

Zanatta said the club was building team spirit between its foreign-born players — many of whom have Chinese heritage — and the players born and raised in China who are on the roster and practice squad.

The IIHF has acknowledged concerns about China’s competitiveness but president Luc Tardif said this month the federation would not remove the team from the Olympics. Tardif appeared to change his stance Tuesday, telling reporters in Canada that the IIHF and International Olympic Committee would decide next week whether China could play and that Norway’s team could step in as a replacement.

It’s unclear how many foreign-born players could represent China. The IIHF has refused to say which Kunlun players are eligible — Chelios, for example, is listed as a U.S. player in KHL records — and Tardif has said the IIHF needs to confirm player eligibility.

Zanatta, who has experience at the Olympics as a Canada-born player for Italy, has said his players will struggle to keep the score down in Beijing.

“For me, it’s pretty easy, having lived the experience of the heritage player with the Italian national team. We basically circled the wagons and we held solid defense and that has to be the attitude,” Zanatta said Monday. “Let’s face it, we’re playing Canada, USA. We’re not looking at anything other than, you know, you’ve got to be able to compete, stay with them.”