Chiney Ogwumike and Kristi Toliver to sit out WNBA season 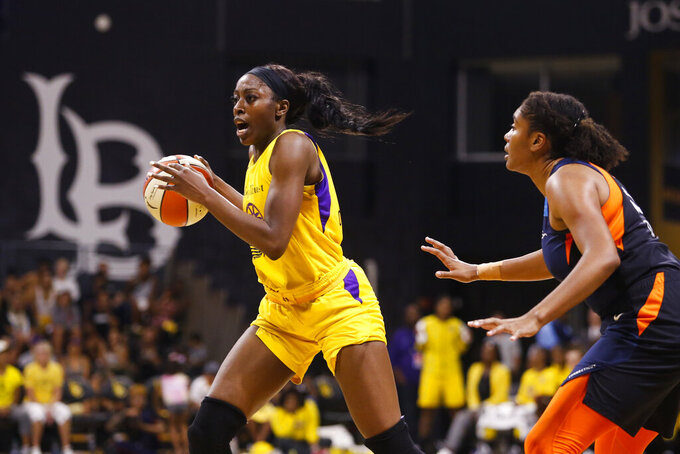 FILE - In this Sunday, Sept. 22, 2019, file photo, Los Angeles Sparks' Chiney Ogwumike (13) drives past Connecticut Sun's Morgan Tuck (33) during the second half of Game 3 of a WNBA basketball playoff game in Long Beach, Calif. The Los Angeles Sparks will be without Ogwumike and Kristi Toliver for the WNBA season so they can focus on their health the team announced Friday, June 26, 2020. (AP Photo/Ringo H.W. Chiu, File)

NEW YORK (AP) — The Los Angeles Sparks will be without Chiney Ogwumike and Kristi Toliver for the WNBA season so they can focus on their health the team announced Friday.

Ogwumike, the No. 1 pick by the Connecticut Sun in 2014 has missed two seasons to deal with injuries and with the shortened schedule felt that it would be smart to take care of her health. She missed the 2015 with a knee injury and 2017 because of an Achilles tendon injury. Both were suffered while she played overseas.

“If you know me, you know that I have overcome some of the biggest challenges an athlete can face on the court," Ogwumike said. “My previous injuries have given me strength and built character, but unfortunately they require me to be careful with my preparation leading up into a season,"

Toliver, who signed with the team in the offseason as a free agent, was a member of the 2016 Sparks squad that won a WNBA title. She also helped Washington win the championship last season, She said she will use the time to get mentally and physically healthy for the 2021 season and “find new ways to make a positive impact in my community,”

“Though I want very much to compete with my team, to be a leader and show up for them, I am not comfortable with the risk to my physical health – short-term and long-term – given the many unknowns of COVID-19 and the risk of injury,” Toliver said. “For me, the right decision under the circumstances is to opt out for the year.”

The WNBA is set to begin play next month in Florida at the IMG Academy after postponing the original start date of May 15 because of the coronavirus pandemic. Players will be housed at IMG and team practices will be held there while games will be held on two courts at Feld Entertainment Center, — a short 20-minute bus ride away.

There will be a 22-game schedule with each team playing a home and away against the 11 other squads over the span of roughly 50 days. The WNBA would use its regular playoff format, with the top eight teams making the postseason and the first two rounds being single-elimination. The top two seeds would have byes until the semifinals. The playoffs would begin in the middle of September and end in early October.

“This year is unprecedented in many ways, therefore my team and I have come to the decision to be proactively cautious and put my body first,” the 28-year-old said. “I am so lucky to have an organization that believes in and supports me as a player and as a person.”

The league had given the players a deadline of Friday to decide whether they wanted to play or not this season. Players are going to report to Florida in early July to start training camp. Ogwumike, as well as all of the other players, had already received her first few paychecks from the league as preliminary rosters were due on May 26.

The Sparks can sign two players to replace them. The organization supports the decision of Ogwumike and Toliver.

“This year has forced all of us to make unprecedented decisions as our society faces the coronavirus pandemic,” Sparks Managing Partner and Governor Eric Holoman said. “With that in mind, the Sparks organization understands that each player has to make the best decision for them."

Ogwumike came to the Sparks last season to play with her sister Nneka and averaged 9.6 points and 5.8 rebounds.

Since the WNBA announced last week that it would start playing next month, about a half dozen players have chosen to sit out this season for a variety of reasons including the coronavirus pandemic and to work on social justice initiatives like the Black Livers Matter movement,

Ogwumike has spent the last few years also working for ESPN as an NBA commentator and will be able to continue in that role as she’s rehabbing.

“I will continue to use all my platforms to elevate and empower my teammates and fellow players in the WNBA as we continue to fight for our communities," Ogwumike said. "This isn’t goodbye, it’s just see you later.”

The Sparks, who lost in the semifinals of the playoffs last season,to Connecticut, bolstered their team in the offseason with the additions of Toliver and Seimone Augustus.