Chloe Kim returns to the superpipe rested, healthy and wiser 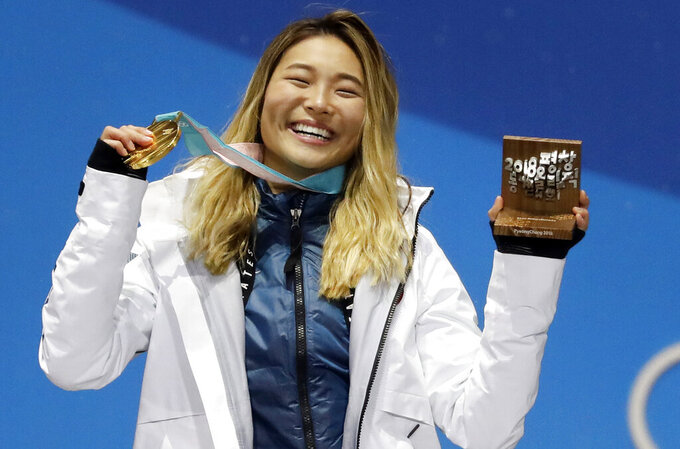 FILE - In this Feb. 13, 2018, file photo, women's halfpipe gold medalist Chloe Kim, of the United States, poses during the medals ceremony at the 2018 Winter Olympics in Pyeongchang, South Korea. Chloe Kim took some time off to heal her body and broaden her mind. Mission(s) accomplished, and now that she's back at her day job — best female athlete in the halfpipe — it looks as though she never left. Now 20 and with a year at Princeton under her belt, the Olympic champion is in the lineup for the Winter X Games, going for her fifth gold medal on the superpipe in Aspen on Saturday night, Jan. 30, 2021. (AP Photo/Morry Gash, File)

ASPEN, Colo. (AP) — Chloe Kim took some time off to heal her body and broaden her mind.

Mission(s) accomplished, and now that she's back at her day job — best female athlete in the superpipe — it looks as though she never left.

Now 20, and with a year at Princeton under her belt, the Olympic champion is in the lineup for the Winter X Games, going for her fifth gold medal on the superpipe in Aspen on Saturday night. Her chance to defend the Olympic title is a scant 13 months away.

If she lost much during her 22 months off the snow, it doesn't show. Kim's first contest back — last week in Laax, Switzerland — ended like most of them do: with a gold medal hanging around her neck and the rest of the field contemplating a superpipe-sized gap between them and the champion.

Not that she took any of it for granted.

“I was so anxious because not only have I not done any of that in almost two years, but it was more with COVID and quarantining, and sitting around and freaking out," Kim told The Associated Press. "I'm thinking, ‘What if this doesn’t go the way I want? What if I don’t know how to do anything anymore?'”

Not likely. But the year in college did give Kim an unflinching look at some things she really couldn't do — things that never really came up during a childhood during which she blended home-schooling with a busy travel schedule and a life synched around the rhythms of the yearly the snowboard circuit.

“I learned how bad I was at time management,” she said. “All my friends had planners, calendars, they were writing schedules out. I was like, ‘What is that?' I had always lived life on the go. Very flexible. But if you're in school, assignments are due at 11:59 p.m."

Her Olympic victory in Pyeongchang three Winters ago validated the massive hype that surrounded Kim and her story. She was the teenage phenom from California but with Korean roots, poised to take the gold medal on “home turf” of sorts, and with her grandma in the stands, to boot.

All that happened, and Kim's post-Olympic life was the kind you would expect, filled with walks down the red carpet, hundreds of interviews with everyone from sports to lifestyle writers — “ What's the one beauty rule you swear by? Moisturizing.” — ambushes from the paparazzi and, of course, a Chloe Kim-inspired Barbie doll.

All of it great. But after a rough landing at the Burton U.S. Open in March 2019 left her with a broken ankle, Kim came to terms with the reality that her body, and mind, needed a break. She had been snowboarding almost non-stop throughout her childhood.

“I need to be human, need to be a normal kid for once,” she explained in an October 2019 video announcing that she had enrolled at Princeton.

She put the snowboard away, and insisted her main form of exercise to stay in shape were her fast-paced walks across campus. She tried as hard as she could to blend in. She made new friends.

“I think one of the most important things I learned was you can make a really good connection with people who don't have the exact same interests as you,” Kim said in her interview with AP. “Finding those similarities with people who aren't snowboarders or athletes, it opened my world a bit more.”

When training resumed in earnest this fall, Kim saw a world vastly changed by the coronavirus pandemic — her trips now punctuated by quarantines and social distancing.

“It's weird seeing someone you haven't seen in a year and sorta giving them a fake air hug,” she said.

In that way, she's in the same place as everyone else in her sport — trying to adapt to a new normal, in need of real halfpipes and real competition to start the intense run-up to the Beijing Olympics next year.

But in so many other ways, she's unlike anyone else on the snow.

She remains the only female to land back-to-back 1080-degree jumps in a competition — a combo she landed even though she didn't need to to punctuate the win on her career-making day in Korea. To her, that's just a starting point for the 2021 season and beyond.

“I definitely won't be telling anyone” what her newest trick is, she said. “You just have to tune in and see it. But the most important thing is, we're all having fun out here.”