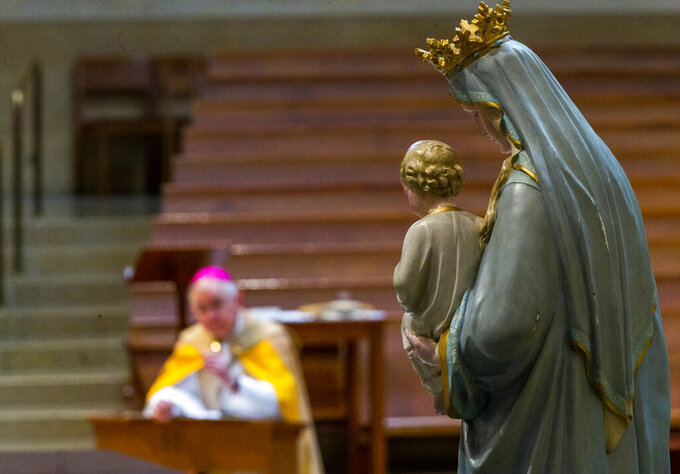 “I said enough’s enough,” Clark said. “We will be singing and praising the Lord. ... We don’t chant, but if we did chant, we’d be chanting too.”

The California ban was one of a number of restrictions on indoor businesses and gatherings put in place last week by Gov. Gavin Newsom amid fast-rising virus cases and hospitalizations. It's unclear if any similar prohibition on singing exists in the United States, though there is one in England.

The virus is more easily transmitted indoors and singing releases minuscule droplets that can carry the disease. The ban may well end up in court as there are differing opinions on its legality, with some groups arguing it infringes on religious freedom while others believe it's constitutional, especially during a pandemic.

The American Center for Law and Justice, a religious freedom law firm with ties to President Donald Trump, says it will sue.

“We can’t stand by and watch as California strips its believers of their God-given right to raise their voices in worship and praise,” executive director Jordan Sekulow said on the center's website. The center, which was founded by televangelist Pat Robertson, did not say how quickly it would sue.

Sekulow was a member of Trump’s defense team, and his father, Jay Sekulow, the center’s chief legal counsel, was one of Trump’s lead attorneys during the impeachment trial.

Another conservative-leaning legal group, The Pacific Justice Institute, told faith leaders in a letter that Newsom's guidance is advisory because it does not say it is an order, cites no legal authority, isn't signed by any official and includes no reference to penalties.

Institute president Brad Dacus said after the letter went out that attorneys there fielded dozens of subsequent calls from relieved religious leaders who allowed singing last Sunday and intend to keep doing so.

“These churches are just glad to know they will not be criminally prosecuted for singing worship songs on Sunday morning,” said Dacus, whose institute has filed pandemic unequal treatment lawsuits against state officials in Oregon and Washington.

But Ali Bay, a spokeswoman for the state Office of Emergency Services, said the guidance by the state Department of Public Health and Division of Occupational Safety and Health must be followed.

It “has the same authority as all of CDPH’s other guidance, directives, and orders, which the governor has ordered residents to heed,” she said.

Newsom earlier faced criticism for not more quickly allowing religious organizations to resume offering inside services. He relented last month but imposed many restrictions, including limiting crowds to 100 people. He added the order on singing to the state's 14-page guidance, which reasons that “activities such as singing and chanting negate the risk-reduction achieved through six feet of physical distancing.”

Erwin Chemerinsky, dean of the law school at the University of California, Berkeley, said the ban is legally enforceable.

“The Supreme Court has made it clear, as have the lower courts, that restrictions on assemblies, including for religious purposes, are constitutional," he said in an email. “I think this restriction surely is constitutional, especially as cases of COVID-19 are surging. There can be enforcement of this, as with other businesses.”

The California Catholic Conference said it would comply.

“You could have a respectful worship service, a quiet one — in fact a lot of people kind of seek that out anyway,” Catholic Conference spokesman Steve Pehanich said. He said some have choir members participate remotely or take other steps to safely provide music.

“The churches are just trying to keep people safe and are working within those guidelines to do so,” Pehanich said.

But others like Clark said they will ignore the ban.

He has spent nearly 30 years growing his Yuba City church north of Sacramento, and said he is intent on protecting his flock with social distancing and other safety measures. He has masks available, with gloves and hand sanitizer, but they are not required.

Clark won't cancel indoor services or end singing by the roughly 500 who attend one of three weekly services.

Clark said there has been no effort to crack down, and no criticism of him flouting Newsom's restrictions. To the contrary, he said feedback has been positive.

"Most of them have been calls, ‘Thank you for standing up for what you believe,’” he said.

In May, health officials blamed a fatal outbreak north of Seattle on a choir practice in which one singer unwittingly infected 52 other people, two of whom died.

Partly in response, the Centers for Disease Control and Prevention subsequently posted reopening tips for religious organizations that discouraged choir gatherings, but removed the guidelines hours later because they had not been cleared by the White House.

About 200 state inspectors fanned out over the long Independence Day weekend to check businesses for violations of new state health orders. But Greg Burt, spokesman for the conservative California Family Council, said he'd heard of no effort to enforce the singing ban during the first weekend it applied.

“As soon as they try to enforce it, it’s going to make national news,” he said.

Harmeet Dhillon, a lawyer and Republican Party official who has unsuccessfully sued Newsom over several health orders during the pandemic, said she is considering a lawsuit over the singing restriction.

Dhillon and other critics including Advocates for Faith & Freedom and the National Center for Law and Policy, said the church restrictions constitute unequal treatment when compared to recent crowds of demonstrators protesting police violence after the death of George Floyd in Minneapolis.

"If you’re allowed to chant ‘Hey hey, ho ho, racism’s got to go’ but you can’t chant the liturgy, that’s obviously discriminatory,” she said.