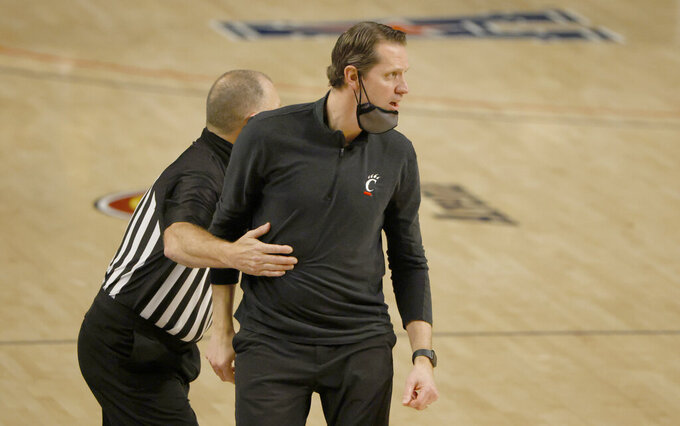 Cincinnati head coach John Brannen is pulled back toward the team bench by a game official as Cincinnati plays Wichita State during the second half of an NCAA college basketball game in the semifinal round of the American Athletic Conference men's tournament Saturday, March 13, 2021, in Fort Worth, Texas. (AP Photo/Ron Jenkins)

The school fired Brannen on Friday, six days after he was put on paid leave after six Cincinnati players decided to transfer last month. Tim Morris will serve as interim coach until a replacement is hired.

“The decision to move in a new direction comes after a thorough review of our program, which included conversations with student-athletes, coaches and staff, as well as with Coach Brannen,” Cincinnati athletic director John Cunningham said in a statement. “Ultimately, the University is acting in the best interests of our student-athletes and of the institution, and this decision is reflective of our commitment to both, as well as to our values that we hold dear.”

Brannen was hired from Northern Kentucky in 2019 and seven players he recruited have since left the program. Four players who left this year were members of the 2020 freshman class who entered the transfer portal during a week in March.

The Bearcats went 20-10 before last season was canceled due to the pandemic. They missed the NCAA Tournament this year after going 12-11.