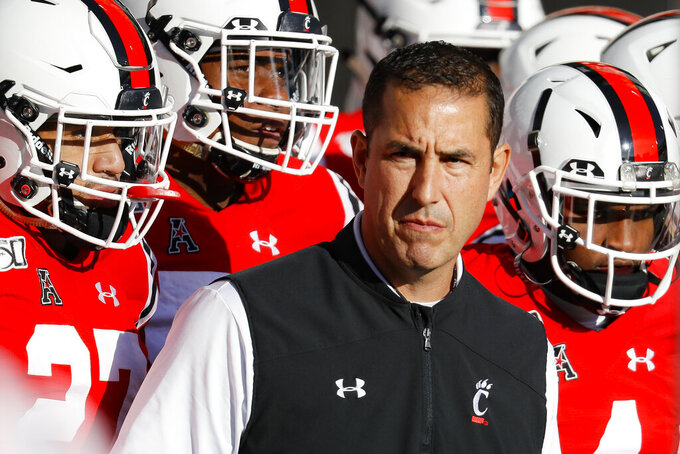 FILE - In this Nov. 9, 2019, file photo, Cincinnati head coach Luke Fickell takes the field with his players before an NCAA college football game against Connecticut in Cincinnati. A meeting of undefeated Group of Five teams when No. 9 Cincinnati plays the No. 16 Mustangs on Saturday, Oct. 24, 2020, the American Athletic Conference’s top defense trying to stop one of the league's best offenses, and the first game matching Top 25 teams since SMU (5-0, 3-0 AAC) resumed playing on campus three decades ago. (AP Photo/John Minchillo, File)

DALLAS (AP) — There has never been a game quite like this on the SMU campus.

A meeting of undefeated Group of Five teams when No. 9 Cincinnati plays the No. 16 Mustangs on Saturday night. The American Athletic Conference’s top defense trying to stop one of the league's best offenses, and the first game there matching two Top 25 teams since SMU (5-0, 3-0 AAC) resumed playing on campus three decades ago.

Now is either team ready for a big game?

Cincinnati (3-0, 1-0) is coming off an unexpected extra week off, with its scheduled trip to Tulsa last weekend pushed back to December because of positive COVID-19 tests among Bearcats players.

“I still believe in some ways we maybe panicked a little bit,” Cincinnati coach Luke Fickell said this week of the postponement. “In my eyes, I wouldn’t want to cancel any game. In my eyes, I don’t know that we couldn’t have played. ... There’s no silver lining of not playing.”

SMU, No. 1 Clemson and No. 12 BYU are the only 5-0 teams going into the weekend while the Big Ten is just getting started in this pandemic-altered season.

The Mustangs, who have already lost leading receiver Reggie Roberson Jr. and starting tailback TJ McDaniel to season-ending injuries, needed overtime to win at Tulane last weekend. That was after they blew an early three-touchdown lead at home against Memphis, which hadn't played in nearly a month, and then needed a fumble recovery that set up a tiebreaking field goal with nine seconds left.

“We felt the same way after we played Memphis and won that we did after we played Tulane and won. There were a lot of mistakes made," SMU coach Sonny Dykes said. "We felt that way really after every game this year."

Shane Buechele, the second-year Mustang and former Texas transfer, has thrown for 342 yards per game with 12 touchdowns and only two interceptions. The Mustangs average 563 total yards and 43 points a game, had three 100-yard receivers against Tulane, and their freshman running back Ulysses Bentley runs for 101 yards per game and has a league-high eight touchdowns.

But now they have to face the the AAC's top defense. Memphis and Tulane are among the worst.

“Cincinnati’s a line-of-scrimmage football team, and that’s a big compliment. That’s what they want to do. They want to run the line of scrimmage. They’re big up front on both sides of the ball,” Dykes said. “It puts a lot of pressure on you to execute at a very high level.”

The Bearcats defense has forced eight turnovers and ranks 12th nationally giving up 307 yards per game. They have allowed only 12.3 points per game, 4.3 yards per play and three first-half points. Even playing fewer games than most teams, Cincinnati is second in the nation in interceptions, with cornerbacks Ahmad Gardner, Coby Bryant and Arquon Bush grabbing two each. Linebacker Jarell White is second in the AAC with 31 tackles. In a 24-10 win over then-No. 22 Army nearly a month ago, Cincinnati held the Black Knights’ prolific triple-option attack to 182 rushing yards and 262 total yards.

PICK SIX AND OTHER PICKS

Cincinnati won at SMU two years ago when safety James Wiggins returned an interception 86 yards for a touchdown in overtime. Wiggins is now a senior who is the team’s second-leading tackler with 15 (11 solo, four assists). ... SMU sophomore cornerback Brandon Crossley has an AAC-high three interceptions, one in each of the last three games, including in overtime against Tulane.

If Cincinnati’s last game was any indication, RB Gerrid Doaks could get more of a load. The fifth-year senior scored three touchdowns on short yardage plays in the season opener, then had career-high 22 carries for 102 yards against South Florida in their last game three weeks ago. He has six touchdowns (four rushing, two receiving), already equaling his 2019 scoring output after missing 2018 injured.