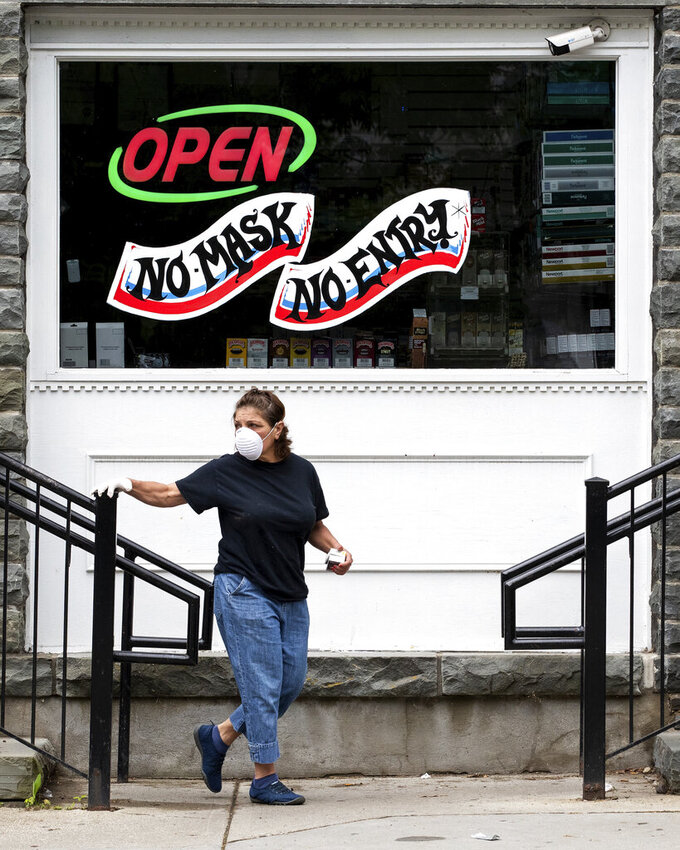 A woman wearing a mask and gloves exits The Shop, a convenience store in downtown Milford, Pa. on Thursday, May 28, 2020. Pike County is moving to Governor Tom Wolf's "yellow" phase of reopening on Friday. (Christopher Dolan/The Times-Tribune via AP)

HARRISBURG, Pa. (AP) — State officials said Thursday they’re making progress, but acknowledge more needs to be done to whittle down an unemployment compensation claims backlog that has persisted for more than two months.

Jammed phone lines, balky computer systems and unreturned emails remain an issue despite a near doubling of staff at the agency that processes claims.

“People are still having some trouble getting through, and believe me, I’ve said it from the beginning, it frustrates us as much as anyone else,” Labor & Industry Secretary Jerry Oleksiak said in an interview with The Associated Press.

Oleksiak spoke after holding a virtual town hall to answer questions from the public.

Like others around the country, the state’s unemployment office was swamped by a record-shattering number of claims unleashed by the coronavirus pandemic. More than 2.3 million people in Pennsylvania, including self-employed and gig workers, have filed for unemployment since mid-March.

Labor & Industry has been hiring hundreds of new staff to help answer phone calls and emails, but the unemployment compensation system is extremely complex, the learning curve is steep and training takes time, said Susan Dickinson, director of the state Office of Unemployment Compensation Benefits Policy. About a third of the agency’s new hires are washing out because the work is too difficult, she said.

Neither official could estimate when things might return to normal, but Dickinson said progress is being made. She said over 86% of eligible claimants who have filed weekly claims have been paid, up from 78% toward the end of April.

Pennsylvania has paid more than $10.8 billion in benefits since the beginning of the pandemic, including $6.3 billion from the regular unemployment compensation program and $3.9 billion in enhanced federal benefits.

Pennsylvania’s unemployment rate was 15.1% last month, the highest in more than four decades of record-keeping.

“We’re confident that as we go forward, and the people we have hired become more accustomed to the work, get better at it, don’t have to get questions answered as often, that that backlog will start to disappear,” Oleksiak said. “We won’t be satisfied until we make sure that people who are entitled to their benefits, get them.”

All state park beaches and most pools will be open next month, the Department of Conservation and Natural Resources officials announced Thursday.

All 58 state park beaches will be open for swimming on June 6, and most state park pools will reopen June 13. Both will be limited to 50 percent capacity, officials said, and other mitigation measures will include restrictions on visitor parking, social distancing and the wearing of masks when not in the water.

The agency also said it’s reopening camping sites, park offices and other facilities at 18 state parks in eight counties that are moving Friday to the “yellow” phase of Gov. Tom Wolf’s reopening plan.

Inspectors with the state Department of Agriculture suspended the retail food facility licenses of Round the Clock Diner's two locations, then returned Tuesday to issue civil violations to the diners for operating while its licenses were under suspension, an agency spokesperson said Thursday.

The owners have vowed to fight to stay open.

“We’re here to give the people the freedom they want, the freedoms that they demand,” co-owner Christos Sacarellos told Fox Business Network. “We should not have these licenses weaponized against us.”

Some restaurants, salons and other businesses have reopened without state permission, saying Wolf's shutdown has gone on long enough and they could no longer afford to stay closed.

More than 70,000 Pennsylvanians have been infected with the coronavirus, the state Health Department said Thursday, and 108 more people have died from it.

The agency added 625 more positive cases, and said the additional deaths raised the total number of fatalities to 5,373.

Nursing homes and personal care homes have been particularly hard hit, with more than 15,000 infected residents and more than 2,500 infected workers at 600 facilities.

With new infections trending down since April, Pennsylvania is in the midst of a gradual reopening. Wolf has been lifting stay-at-home orders and some restrictions on businesses.