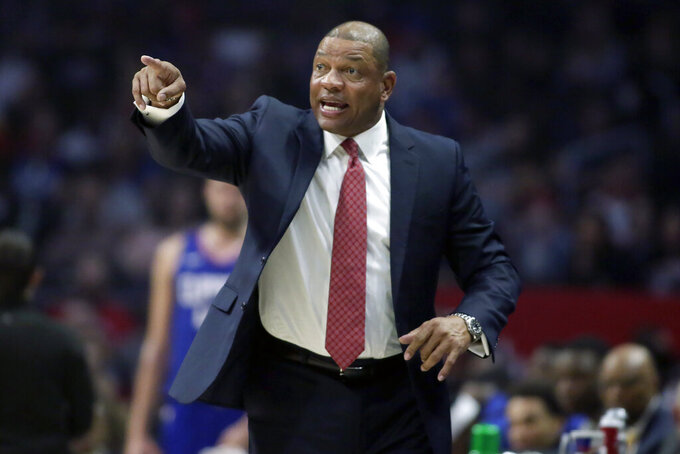 FILE - In this Feb. 1, 2020, file photo, Los Angeles Clippers head coach Doc Rivers talks to his players during the first half of an NBA basketball game against the Minnesota Timberwolves in Los Angeles. (AP Photo/Alex Gallardo, File)

Starting the season, then stopping because of a global pandemic, and then resuming. These are unprecedented times in the NBA, which would be an ideal backdrop for the Los Angeles Clippers to win their first championship.

Hey, somebody’s going to hoist the Larry O’Brien Trophy. And a franchise that hasn’t been past the second round of the playoffs figures it might as well be them.

The Clippers were well-positioned to make a run when the league shut down in March. They were second in the Western Conference standings with a 44-20 mark, 5 1/2 games behind the first-place Lakers. “We’re going to pick up where we left off,” said Paul George.

Los Angeles was 25-7 at home and 19-13 on the road. But now their only home is the Walt Disney World complex in Florida. First come eight games for seeding purposes. Then it’s on to the playoffs.

Kawhi Leonard owns two championship rings (San Antonio and Toronto) and coach Doc Rivers has one (Boston). George is hungry for his first in his 10th season after years of futility in Indiana and Oklahoma City.

George missed the start of the season while recovering from shoulder surgeries and Leonard was on load management because of his knee. Patrick Beverley and Landry Shamet (who tested positive for COVID-19 and didn't travel to Florida) also missed time. Shamet, a key reserve at shooting forward, could join the team in time for games. Starting center Ivica Zubac had not yet arrived in the bubble due to undisclosed personal reasons. Neither had Marcus Morris, who joined the team in February. Montrezl Harrell had to leave the bubble for a family matter, and will have to quarantine again upon his return. Joakim Noah, who signed in March, could find himself getting more playing time as a result of the absences. Point guard Reggie Jackson signed on in February after playing 14 games with Detroit. Overall, the shutdown was a blessing in disguise, giving the entire team four months to repair their nicks and bruises from the early grind of the season.

After playing through various absences early on, the Clippers started to come together on the floor. Rivers was able to mix and match lineups and see the full complement of firepower at his disposal. During scrimmages in Florida, he's been experimenting with lineups featuring a big man with four smaller players or five smaller players on the floor at once. The team's chemistry also melded, with Leonard and George fitting in easily as the resident superstars. “Everyone has a voice no matter if you’re the top dog or not getting a lot of time at all,” Beverly said. “We listen to everybody.”

Leonard led the team in scoring (26.9 points) and rebounds (7.3) before the shutdown. George was averaging 21 points. Lou Williams, who led the team in scoring last season, was chipping in 18.7 points and a team-high 5.7 assists while maintaining his sixth man role. Harrell averaged 18.6 points and 7.1 rebounds. Williams and Harrell were the league's highest-scoring bench duo last season.

When Jackson isn't making plays, he'll be counted on to provide stronger defense than Williams does with the second unit. Leonard and George are elite one-on-one defenders when they're not guarding multiple positions or helping away from the ball. Not that Beverley needed much inspiration for his already tenacious defense, but he visited Leonard at his offseason home in San Diego and got to see Leonard's work ethic up close.

The Clippers have played with a scrappy intensity under Rivers in recent years and it's a mindset they're eager to maintain. They don't want to let down the dogged determination they pride themselves on even with the addition of Leonard and George. The players stayed in touch during the shutdown, sharing videos of each other doing conditioning work. “I almost thought that we grew even stronger being further away from each other because we knew what was at stake this year,” George said. “We knew what we had, and we didn’t want to lose that.”