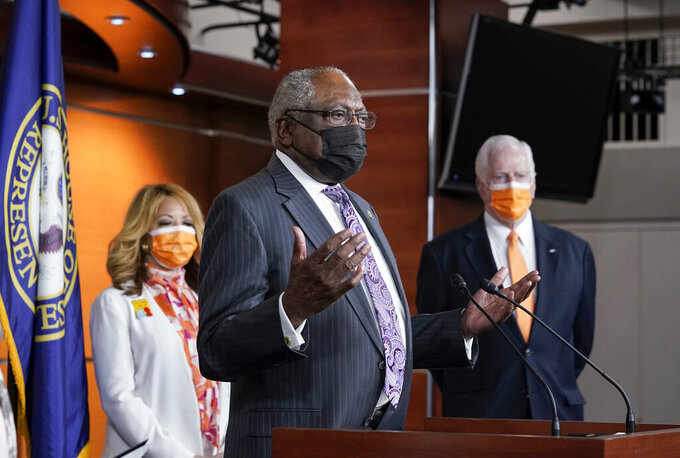 COLUMBIA, S.C. (AP) — With a White House-led public relations push outlining its benefits for citizens, the pandemic relief bill known as the “American Rescue Plan” is on track to be Democrats’ best hope to keep from losing ground in the midterm congressional elections next year, according to the third-highest-ranking Democrat in the U.S. House.

The 2021 aid plan, approved by Congress on party-line votes and signed by President Joe Biden earlier this month, includes $195 billion for states, plus separate funds for local governments and schools. In Clyburn’s home state of South Carolina, that means more than $2 billion for state government coffers to be allocated by state legislators. There’s $188 million for capital improvements, as well as incentives to expand Medicaid, which the state has not done under the Affordable Care Act.

Trying to impress upon Americans what the plan means for them is a top priority, Clyburn said, unlike after the rollout of the Affordable Care Act, when the congressman said misinformation about the program was allowed to overtake its actual benefits.

That post-ACA malaise, Clyburn said, ended up harming Democrats in the 2010 midterm elections that followed, when they lost dozens of U.S. House seats and control of that chamber. It took another decade for voters to fully grasp how the program had benefited them, something Clyburn said ultimately helped the party make gains in the 2020 elections, including control of the U.S. Senate and White House.

“That’s where we made the big mistake with” both 2010 relief packages, Clyburn said. “We never told people exactly what we had done, and so the people opposed to what we were doing got a chance to fill in the blanks.”

For his part, Clyburn has written letters to some of his constituents in South Carolina’s 6th District, explaining to them personally how much of a benefit they will receive, and how much relief is flowing to their counties and school systems.

“I wanted them to know that, this is not just about you. You’ve got two children — it’s about them,” Clyburn said. “Do you qualify for child care? Are you employed and need the earned income tax credit?”

One of those constituents, Brittney Badger, said she was thankful to get a detailed breakdown of what she’ll be receiving to help her household, which includes two young daughters, stay on track. Under the plan, Badger will receive a $4,200 direct payment and a $6,600 child tax credit, as well as an increase in food assistance vouchers.

Badger and her daughters live in Jasper County, a rural area at South Carolina’s southern tip. The county is often among those with South Carolina’s highest unemployment rates, a situation that has only deepened at times during the pandemic.

Badger works as a bookkeeper at Hardeeville Elementary School and, while she's thankful her employment remained steady during the pandemic, she said she had to beef up her home internet so that her 7th grader could do virtual learning while she worked from home for a time.

It’s that direct payment that Clyburn said makes the plan more beneficial than relief plans like the one that followed the 2008 financial crisis, when he said “trickle down” benefits often took much longer to reach people like Badger. For now, the mother of two said she’s already seeing dividends from what her family is receiving, money that will help now and also in the future.

“Dealing with the pandemic, it definitely opened your eyes. You don’t take anything for granted, and it showed you the importance of saving money,” Badger said. “I’m just grateful for the congressman and his team for thinking about us, and putting plans in place where we can get back on our feet. We can continue to grow.”

The new plan is still facing partisan opposition. Earlier this month, Republican attorneys general from 21 states, including South Carolina, questioned a provision that bars states from using funds to offset tax cuts in a letter to Treasury Secretary Janet Yellen.

“Nothing is more important to the principle of states’ rights than the right of South Carolina to cut taxes if it so chooses,” South Carolina Attorney General Wilson said at the time. “I will most certainly defend against any federal intrusion on our state’s right to reduce tax burdens on its citizens.”