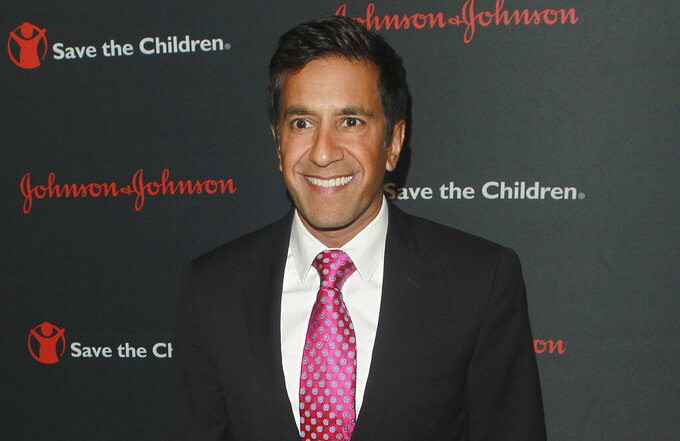 FILE - Sanjay Gupta attends the Save the Children 3rd Illumination Gala on Nov. 17, 2015, in New York. Gupta says he's worried that Americans are not getting clear enough messages about what they should or shouldn't be doing at this stage of the coronavirus pandemic. (Photo by Donald Traill/Invision/AP, File)

NEW YORK (AP) — At this stage in the pandemic, CNN's Dr. Sanjay Gupta is concerned that Americans are not getting clear enough messages about what they should or shouldn't be doing to keep themselves and others protected.

Should people still be wearing a mask outside? (He doesn't.) What can a vaccinated person do that an unvaccinated person shouldn't? Is it safe to eat inside at a restaurant? (Not if it's full, he believes.)

The veteran CNN chief medical correspondent — who produced and narrated a documentary about the race to develop a vaccine airing this weekend — said government medical experts have sacrificed clarity in an attempt to be comprehensive at a time vaccines are changing the outbreak's picture.

Right now you have people on both extremes: those who won't let down their guard, or masks, despite 115 million Americans now fully vaccinated, and those who say “you guys don't know what you're talking about, so I'm not going to abide by any of these guidelines,” he said.

“I've been for 20 years now trying to communicate complicated health messages,” he said. “It's not easy, by any means, but it has to be understandable. At the end of the day, you can have a beautiful message, but if people aren't going to understand it, you have to go back to the drawing board.”

Kenneth Resnicow, a professor at the University of Michigan's School of Public Health, said he has noticed something similar. Continued discoveries in how the virus is transmitted, along with the societal changes brought on by vaccination, is most responsible for the uncertainty.

He said the attention now should be placed on people who are firmly anti-vax because simple education won't be enough.

“I don't think we have a good plan nationally for reaching them,” Resnicow said.

Gupta said he's concerned about people tuning out doctors they see on TV and view as arrogant. So he's concentrating on letting people in on the process he uses to reach conclusions and offer advice.

Gupta said he feels optimistic about the coronavirus fight in the U.S. heading into the summer, even as he's watched the tragedy unfold in India, where his uncle died of COVID-19. He doesn't like the phrase “herd immunity” but predicted that the U.S. will be close to a threshold for getting the virus under control, counting everyone who is vaccinated and those with natural immunity from having had it. He still advises people who've had the virus to get vaccinated, since it has a higher level of protection.

But Gupta said there's no magic figure of protected people that will stop the spread, and that it's even a moving target as new variants emerge and people head back indoors in the fall.

The documentary, “Race for the Vaccine,” debuts Saturday at 9 p.m. Eastern on CNN. The network had access to teams of scientists around the world who were trying to develop the vaccine, including George Gao of the Chinese Center for Disease Control and Prevention.

The film not only tells the story of the winning team but also an Australian scientist put under enormous pressure to develop a vaccine, only to have it abandoned because of a last-minute flaw.

Gupta likened the effort to a moon shot. The scientists changed medical progress and innovation because they completed in less than a year a task that many had predicted would take much longer.