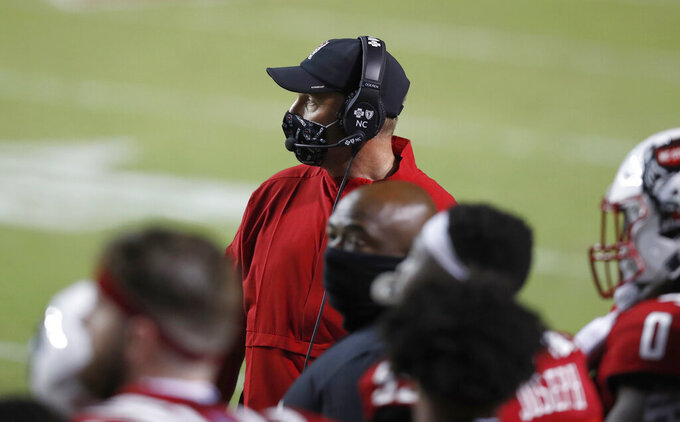 First it was North Carolina State that couldn’t play Virginia Tech because of positive coronavirus tests, and then it was the Hokies who had to pull out of a game against Virginia because of the virus.

Coach Justin Fuente's team is preparing to finally play its opener against the Wolfpack, but after all that has happened, he sounds very much like he will believe it when it happens.

“We’re taking it one day at a time here and trying to get our guys ready to go,” he said, chuckling, as though realizing he was repeating the what he previously said.

“We will not have a full roster. I hope we’re able to play. We still have three more tests this week," he said, with the first coming Monday and the next Wednesday and Friday.

Wolfpack coach Dave Doeren knows all about the day-by-day approach. The school paused athletics activities in August due to positive coronavirus tests, which sidelined the football program for eight days and caused the game with the Hokies to be postponed. They opened their season on Saturday with a 45-42 victory against Wake Forest.

Doeren said he isn’t spending time worrying about whether the game will go forward, but is solely focused on getting his team ready to play.

“I think that’s just how life is right now with this,” Doeren said. “We’re going to plan like we’re playing a game every week. And as you’ve already seen from us, we had to move our original game with them back because of our situation. So we all know what the realities are of it. You just go with what you have.

“Right now, we have a game that’s on the schedule. Nobody said we’re not playing it. We’re preparing to practice like we are. If things change, then we’ll change what we’re doing.”

One of those changes for Doeren came at quarterback, where the Wolfpack started Bailey Hockman instead of expected starter Devin Leary because Leary missed numerous workouts after having to quarantine for about 20 days.

Hockman threw for 191 yards and a score to go with a rushing TD, completing his first 12 passes. He also was a factor in the running game, which piled up 270 yards.

Things have changed for the Hokies, too, since they took a four-day break from practice because of their own positive tests. Fuente said coaches are constantly evaluating what they are doing, how to talk to the team, protocols and even how to best do team meals.

“I've been pleased with our dedication to what we're trying to get accomplished here,” he said. “There are elements that are a little bit beyond our control, but us focusing on things that we can control on a daily basis, I think, has been the thing that we've talked about multiple times.”

“We’re all living in a test-by-test world now, so we’ll see as they come and hopefully everything works out fine and it all works,” he said. “I’m not trying to raise alarm. ... I’m just being honest with the situation we’re in.”