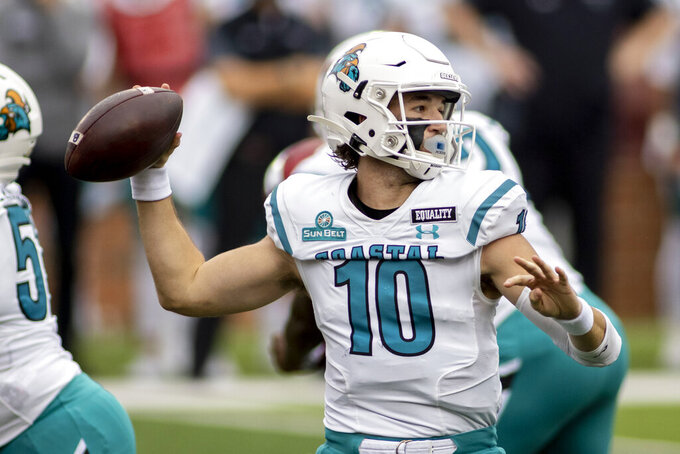 The Coastal Carolina Chanticleers did everything asked of them and then some.

Coastal played 11 games during a pandemic that wreaked havoc on schedules nationwide and won them all. The Chanticleers even added unbeaten BYU late in the season on short notice and pulled out a victory in one of the season’s most exciting games.

That wasn’t enough for the Sun Belt co-champions to even get close to the College Football Playoff. The Chanticleers were No. 12 in the rankings released on Sunday.

Cincinnati got snubbed, too. The Bearcats defeated Tulsa on Saturday night in the American Athletic Conference championship game to remain undefeated, yet the Bearcats finished No. 8 in the standings.

Once again, Group of Five teams have no representation in the College Football Playoff. That’s been the case every year since the current format was introduced for the 2014 season.

“If a G-5 team wasn’t going to make it this year, I don’t know if they’re ever going to make it, just because of all the circumstances,” Coastal Carolina coach Jamey Chadwell said.

Cincinnati was rewarded with a New Year’s Six game -- the Bearcats will play Georgia in the Peach Bowl. But Coastal was left out of the top-tier games. The Chanticleers will play Liberty in the Cure Bowl on Dec. 26.

Chadwell called not getting a New Year's Six bid “disappointing.”

“I thought this year they might think differently because this year, outside of the top four, maybe the top six -- we’ll say top six -- our resume, Cincinnati’s resume, was just as good as everybody else’s,” he said. “I thought maybe in this year, maybe they would put two G-5’s together. Let us and Cincinnati play each other because the eye test was such a big deal. Let’s see what happens in that game.”

It wasn’t just the Group of Five teams that got bruised. No. 5 Texas A&M, with only a loss to top-ranked Alabama and seven straight wins in the rugged Southeastern Conference, finishined No. 5 in the playoff rankings. The SEC often gets the benefit of the doubt, but not this time.

“All of these SEC teams that are “MEDIOCRE” in the media’s eyes would run the table in some of these other leagues,” he tweeted. “Only a few teams out of the SEC can really play in the SEC.”

Texas A&M got a pretty good consolation prize: The Aggies will play North Carolina in the Orange Bowl.

That's the kind of bowl bid Chadwell thought Coastal deserved. He said the system is working exactly as expected.

“Is it broken? Depends on who is it broken for,” he said. “For the G-5’s, it is. I don’t think it was ever fixed for them. For the Power 5s and for what they’re trying to get there, it’s working out the way they want it to work out.”

Tulsa coach Philip Montgomery lobbied for the American Athletic Conference after his team lost to Cincinnati in the title game.

“I think our conference is one of the toughest conferences in the nation, top to bottom,” Montgomery said. “Every week’s going to be a battle. Everybody’s got good players. There’s good coaches in this league.

Montgomery said he felt Cincinnati deserved a spot in the playoff.

“If we’re not going to get somebody out of our conference at some point in time into the college playoff, then we’ve either got to expand it, we’ve got to do something different,” he said. “But our teams deserve the opportunity to go continue to compete.”

AAC Commissioner Mike Aresco recently said the previous system that was used before the playoff -- the widely unpopular Bowl Championship Series selection process -- was actually more fair. In that system, polls and computers selected participants for the title game and other major bowls.

In an example of what chances non-Power Five teams are willing to take to impress the committee, BYU -- an independent -- traveled more than 2,200 miles to step in after Liberty had to back out of a game against Coastal due to COVID-19 concerns.

Even with that, Iowa State got into a New Year’s Six bowl game over Coastal. The three-loss Cyclones lost to Louisiana-Lafayette early in the season -- a team Coastal beat a month later.

“I think that’s the one that sort of, you scratch your head on a little bit because they did have three losses. ... They were in love with Iowa State the whole year long, and they do a good job,” Chadwell said. “That’s the one I would have been, ‘I don’t get this one.’ But they’re not going to let a Cincinnati and Coastal get all that money.”