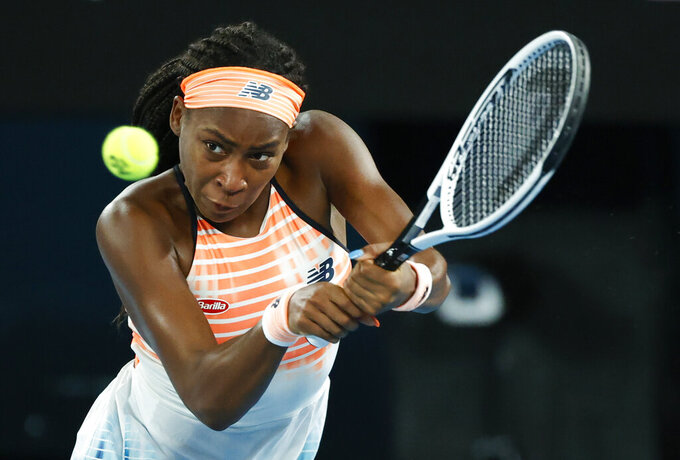 ADELAIDE, Australia (AP) — Coco Gauff's five-week stay in Australia has been extended with a second-round win on Wednesday at the Adelaide International.

The 16-year-old American beat sixth-seeded Petra Martic 5-7, 6-3, 6-4 to advance to the quarterfinals of the hard-court tournament at Memorial Drive. It was Gauff's fourth win in a row after two in qualifying and another in the first round.

Gauff lost to fifth-seeded Elina Svitolina in straight sets at the Australian Open. During her Australian Open debut in 2020, she lost to eventual champion Sofia Kenin in three sets in the fourth round.

This year, Gauff also spent two weeks in COVID-19-forced quarantine ahead of the delayed Australian Open. She will next face Shelby Rogers on Thursday in the quarterfinals.

The 23-year-old Bencic lost in the quarterfinals at Memorial Drive last year. She won six consecutive games from early in the first set to take control of the match.

“I really like this court. It’s only my second time here in Adelaide but I love this tournament, I feel very comfortable here,” Bencic said in an on-court interview.

Top-ranked Ash Barty, who lost in the Australian Open quarterfinals, was beaten in the second round by Danielle Collins 6-3, 6-4.

Barty has maintained her No. 1 ranking over the past year despite have played few matches, including a decision not to defend her 2019 French Open title. But she has a protected ranking because of the COVID-19 pandemic.