Coke volume plunges 25% in April; hope for a 2nd half bounce 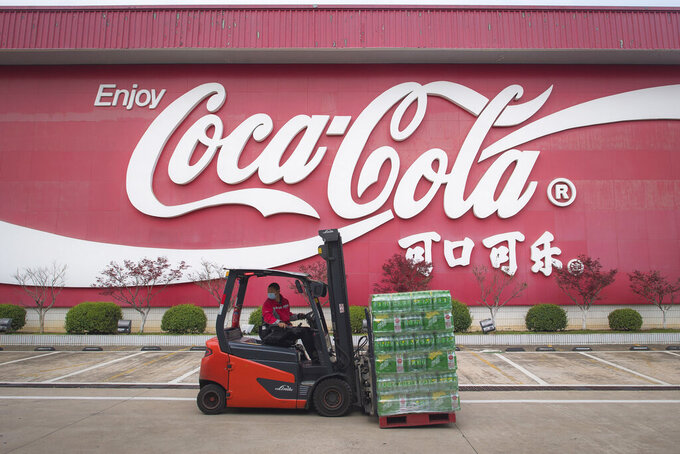 In this Tuesday, March 24, 2020, photo released by China's Xinhua News Agency, a worker wearing a face mask drives a forklift at a Swire Coca-Cola Beverages Hubei Limited plant in Wuhan in central China's Hubei Province. According to Chinese state media, the plant restarted some production lines on Monday. While many migrant workers across China remain trapped by travel bans due to the coronavirus, some industrial production has returned to action, including in the crucial auto manufacturing industry, which is largely based in Wuhan, and in businesses that provide critical links in global supply chains. The new coronavirus causes mild or moderate symptoms for most people, but for some, especially older adults and people with existing health problems, it can cause more severe illness or death. (Xiao Yijiu/Xinhua via AP)

Those volumes made up of bottled drinks and the syrups Coke sells to theaters, restaurants, stadiums and music venues were humming early in the year, revealing how fast the virus hobbled human activity and commerce, from mom-and-pop shops to global operators like Coca-Cola Co.

“There has been temporary but profound pressure on our customers and our business," Chairman and CEO James Quincey said Tuesday.

Volume was up 3% through February excluding China, and Coke was on track to reach and possibly exceed its financial targets.

But within a month the Tokyo Olympics, of which Coke is a major sponsor, were off. Theaters and restaurants closed in Europe, the Americas and Africa, and billions took shelter in their homes.

Global unit case volumes rose 7% in China in January, then it began to slide. The same pattern was repeated first in Europe, and then in North America.

While sales to homes spiked briefly, almost half of Coke's sales come from movie chains, vending machines, concerts and other events. Almost all of the volume decline to-date in April came from those places.

And sales of drinks that go in people's pantries or refrigerators have leveled off. In some places, like India, social distancing measures are so strict that home sales have suffered as well, Quincey said.

“The ultimate impact on the second quarter and full year 2020 is unknown at this time, as it will depend heavily on the duration of social distancing and shelter-in-place mandates, as well as the substance and pace of macroeconomic recovery,” the company said in a prepared statement. “However, the impact to the second quarter will be material.”

Coke remains optimistic about a rebound in the second half of this year, but Quincey stressed that the company is navigating uncharted territory.

“We are still some way from the new normal," he said.

Coke’s headquarters are in Georgia, where the state governor has announced aggressive plans to reopen some businesses starting Friday. Those roll-outs would extend to restaurants and other places next week.

Quincey did not directly address those plans, which are being questioned by health experts. But he does not believe the company's Atlanta headquarters will open that soon.

Some Coca-Cola labs or technical facilities might open sooner than headquarters and when they do, the company will likely implement strategies like employee temperature monitoring or staggered shifts, like those being used in Shanghai, the only company office that is currently open.

Offices in Shanghai are disinfected at the end of each day.

“We’ll have to see how the health situation performs,” Quincey said Tuesday.

Most Coke employees are still on the job in some way. Production is focused on the company's most popular drinks to keep store shelves stocked.

Coke has furloughed 14,000 baristas at its Costa coffee chain in China and the United Kingdom, but those workers are being paid, Quincey said.

The company reported Tuesday that first-quarter net income jumped 65% to $2.8 billion, or 64 cents per share.

Coke has already disregarded earlier projections for the year, but said its financial standing is strong Tuesday. Coke ended 2019 with $8 billion in cash and there was strong demand for a $5 billion debt offering last month.

Plants have reopened in China, where the company checks the temperatures of workers daily. It's ramped up sanitation measures at all facilities.