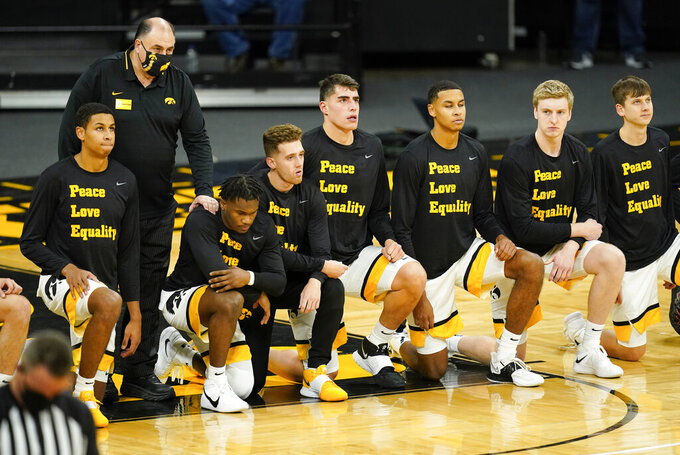 Iowa players kneel on the court before the playing of the national anthem before an NCAA college basketball game against North Carolina Central, Wednesday, Nov. 25, 2020, in Iowa City, Iowa. (AP Photo/Charlie Neibergall)

The strangest anticipated season in college basketball history kicked off Wednesday with dozens of games at arenas across the country.

Like everything else in this pandemic world, it was odd and disjointed.

One day down, who knows how many more left.

College basketball, like the rest of the sports world, was thrown into disarray last March when the surging coronavirus pandemic shut down everything.

Cancelation of the NCAA Tournament cost the NCAA $375 million in revenue, so the organization that runs college sports was determined to get through the 2020-21 season.

The prelude to Wednesday's start followed the lead of a college football season filled with cancelations, shutdowns and last-minute replacement games.

Dozens of college basketball programs shut down for positive COVID-19 tests, big-name coaches like Tom Izzo, Scott Drew, Jim Boeheim among them. Games canceled almost hourly. Programs moved in and out of multi-team events like a game of whack-a-mole.

The first big event in Connecticut dubbed Bubbleville became more like Juggleville as teams dropped out, replacements moved in and crafting a schedule became like sorting through AAU brackets.

While gamblers socially distanced inside the Mohegan Sun casino, no fans were allowed in the 10,000-seat arena for the opening game between Virginia and Towson, a late replacement for coronavirus-affected Maine.

Yelling coaches and squeaking sneakers echoed off the empty seats, and seats on the benches were spread out for social distancing — as they were in arenas across the country.

Cardboard cutouts filled most arenas and recorded crowd noise was piped in to replace the full-throated roars of real fans.

North Carolina played its hype video before announcing the starting lineups and played House of Pain's “Jump Around” before playing College of Charleston — despite playing in front a handful of player families and staff at the 21,750-seat Smith Center.

Kentucky's Rupp Arena, typically one of the toughest road venues in college basketball, was limited to 15% capacity and felt like the doors had just opened instead of the usual buzz at tipoff.

“We have to create our own energy,” said Iowa preseason All-American Luka Garza, who had 26 points and 10 rebounds in a win over North Carolina Central. “As a basketball player, I have no problem doing that. I play the same whether I’m at LA Fitness or in front of 15,000 fans.”

Ten members of the top-ranked South Carolina women's team followed the social justice lead of the NBA and WNBA by remaining seated for the national anthem before their 119-38 win over Charleston.

“We just wanted everyone to know we haven’t forgotten about what’s going on,” guard Zia Cooke said. “Of course, this is a basketball game, but we wanted to use our platform.”

Numerous other teams sat or knelt during the anthem, including North Carolina State's women. The Virginia men's team had "UNITY" on their warm-up shirts and Towson's players had a raised fist on their backs.

Georgetown coach Patrick Ewing made a different kind of statement during the Hoyas' season-opening game against Maryland-Baltimore County, draping a white towel over his shoulder in memory John Thompson. Several other coaches followed suit to honor the Hall of Fame coach who died in August at 78.

Some teams never made it to the floor.

Georgia's opener against Columbus State was canceled just hours before tipoff due to positive COVID-19 tests within the Division II team. Lipscomb's game against Campbellsville Harrodsburg also was canceled due to coronavirus issues.

On the women's side, No. 9 UCLA had its game called off after an 80-minute wait for Cal State Fullerton to get COVID-19 test results and Rutgers' opener was called off due to a positive test in Monmouth's program.

“This is obviously a situation unlike any other I’ve had to deal with in my 31 seasons of coaching college basketball,” Georgia coach Tom Crean said. “This season already was a surreal experience all around. This is truly that.”

Oklahoma and Monmouth became the latest teams to pause all activities due to positive COVID-19 tests.

The game went on mostly as usual on the court.

Drake pulled off the first upset of the season, winning 80-70 at Kansas State. Montana State of the Big Sky Conference followed with a 91-78 rout at UNLV, Saint Francis (Pa.) beat Pittsburgh for the first time in 30 tries and Georgia State beat Georgia Tech in four overtimes for its first win over an ACC team.

Illinois senior Ayo Dosunmu showed off why he was a preseason All-American, finishing with 28 points, 10 rebounds and five assists in a 122-60 win over North Carolina A&T.

Heralded Oklahoma State freshman Cade Cunningham, another preseason All-American, had a stellar debut, finishing with 21 points and 10 rebounds in a 75-68 win over Texas-Arlington.

The day before Thanksgiving, players, coaches and fans were thankful to have college basketball back. Where it goes from here, nobody knows.